From time to time I venture away from the path of opera, symphony & theatre.

Tuesday night as Erika & I were getting ready for bed, having brushed & flossed and made ourselves ready for slumber, any thoughts of sleep were disrupted decisively by an intruder.

“What is THAT?” Erika was looking at my leg.

What did she mean? I followed her gaze. “Oh… I guess I must have scratched myself”. Yes I had a mark on my calf. I was still intent on sleep so I was brushing off the query, wanting to sleep.

“Let me see that,” she said.  I was expecting to sleep.  It went back and forth a few times. I’ll abbreviate the conversation,…

But she insisted, so I put my leg up on the bathroom counter. A mole? A bump? I was half-asleep, but aware that yes, this is where partners can be so helpful, an extra pair of eyes to spot things that might be growing on parts we can’t see, to prevent cancer, right?

Erika and I were not on the same page. I was out of it, meanwhile she? She looked closely, wanted to disinfect the wound. And as she approached with the alcohol soaked cotton pad, she thought she saw something move.

It all happened so fast. And so this changes from a sleepy bedtime story into a bit of an adventure.

Erika used her cotton pad to pull something out of my leg. She grabbed it. It wouldn’t come out. Erika advised me that she thought there was something in my leg, grabbed at it… Her body language was amazing, while I burst out laughing. As she explained: this strong little thing was pulling against her, and strong.

Me? I always laugh when I’m in pain (…ouch!). Luckily Erika was careful not to let this little beast break apart, so it came out all in one piece. And for the moment still alive.

My leg was still up on the counter where Erika swabbed hydrogen peroxide onto the open wound. I was thinking about Alien, or more accurately the reprise in Spaceballs¸ where John Hurt is hurt indeed, especially when he said “oh no not again”.

I resisted the impulse to sing “hello my baby…”  But yes I did say “CHECK PLEASE!”

I took a picture of the little bugger –whatever it was—before putting it first into a plastic bag between the cotton pads and then into a glass jar. 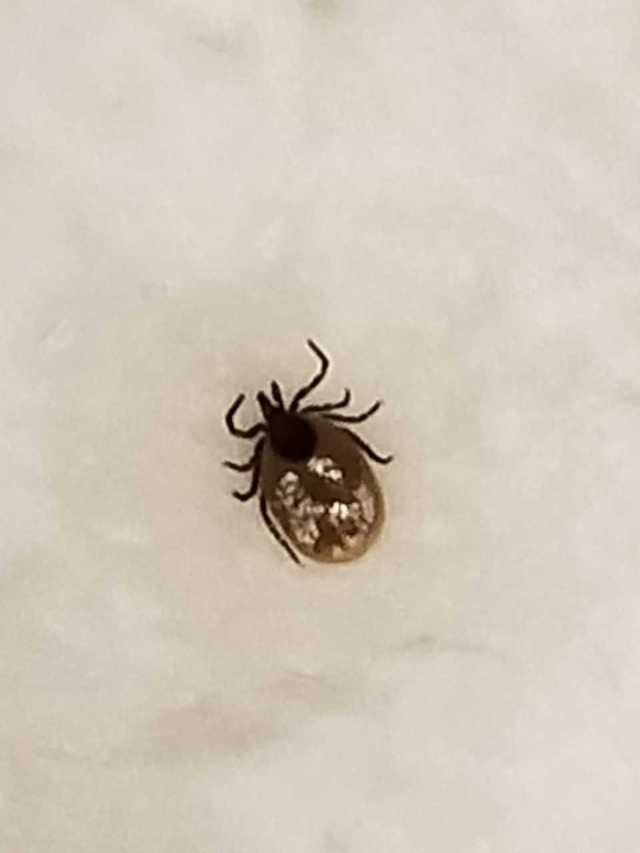 Erika was shaken but did manage to get to sleep within half an hour, whereas I would be up for ages, googling about ticks. Did I catch something or would I catch something? Lyme disease? Of course the internet stories don’t tell you the whole story.

I figured out after the fact what had happened. I had been carrying yard waste from the back with the intention of bundling the bigger pieces for collection. While carrying an armful, surely something slipped into the gap between my rubber boot and my jeans; I know this because the wound is exactly where my boots reach, an uncanny coincidence.  While I had the long pants, long-sleeve shirt, and even the gloves (although I wasn’t wearing them), if you don’t tuck your pants carefully into your boots, you’re practically issuing an invitation to the little fellers. 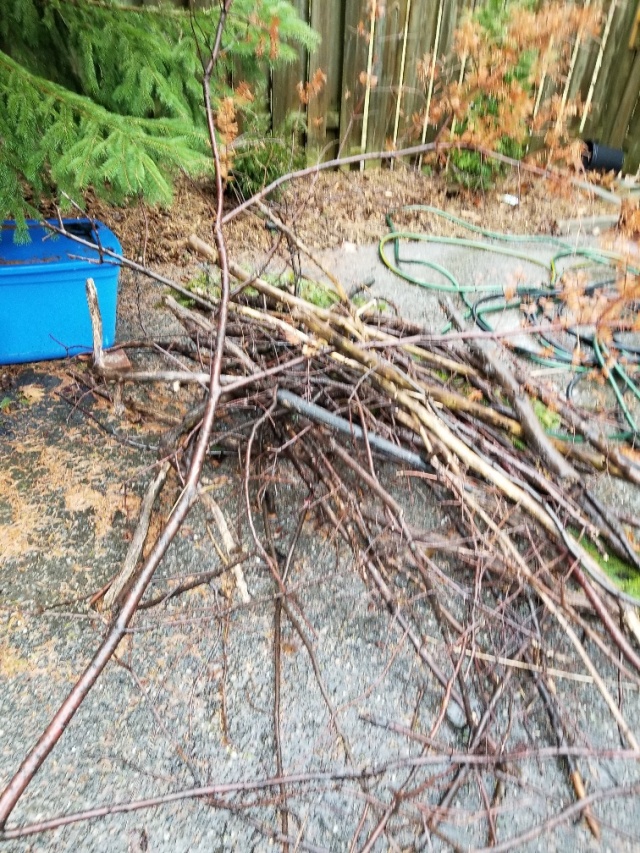 Yes it’s yard waste.  It’s also potentially the opportunity for a tick to get to know you better.

After reading up on ticks and calling Telehealth Ontario (a very helpful nurse), I booked the next morning off work to go see my doctor. Whether or not the tick was dangerous, I wanted her to look at my wound and if necessary give me antibiotics. After looking at the photo (which did not resemble the ticks known to carry the bacteria) and the wound (where there was no sign of any rash or the tell-tale signs of infection) we concluded that it was still a good idea to take a precautionary dose of antibiotic.

I was reassured that the med we gave the dog really make her safe, because if any tick tries to bite her: it dies almost instantly.  If you’re wondering why we don’t have comparable meds at our size and longevity we’d be poisoned; dogs are smaller & live shorter lives.

I took the little specimen in to the public health office. A few days later and I feel great.

Please be careful. If you have any suspicious bumps or wounds, don’t be a stoic, there’s no shame in being certain.

It’s tick season! There are maps showing what parts of the province have the dangerous ticks.  Please be careful.

This entry was posted in Animals, domestic & wild, Food, Health and Nutrition and tagged tick. Bookmark the permalink.