I swallowed a moon made of iron: Oxymoronic, Prophetic

Njo Kong Kie has created a one man show from Xu Lizhi’s texts, that he sings and enacts mostly from the piano, I swallowed a moon made of iron, presented at the Berkeley Street Theatre by Canadian Stage. That title comes from one of Xu’s poems.  At times we get syncopated rock songs sung in Chinese, sometimes we get something more like classical lieder, a cross between Debussy & Schumann, the words taking us inside the sensuous experience of a worker in a place we can barely imagine.

No it’s not Marxist or revolutionary, these are the visceral life of a sensitive & compassionate young man rendered in verse.

In 2010 fourteen workers committed suicide at the Shenzhen complex of Foxconn, a major contract manufacturer of electronics for many of our digital devices. In 2014, 24 year old Xu Lizhi, working at the same plant, did the same. Xu was also a poet, known as one of the most promising young poets in China’s worker-poet literary movement, comprised of young labourers writing about the working class. His death sparked headlines in China and across the globe.

I remember in my childhood studying Arthur Miller’s Death of a Salesman, pushing the envelope of tragedy with a hero who was not heroic. Where do we go from there(?), our teacher asked. Reality TV is one logical consequence, a discourse for an era when poetry & heroism seem impossible, a time epitomized by Donald Trump. As we’ve watched the rise of information technology & the transformation of labour, I’ve long hoped to see an opera someday created from R.U.R., Karel Capek’s play from the early 20th century (“RUR” =Rossum’s Universal Robots), which long seemed to be an ideal vehicle for an opera. I wondered about possible directions for the evolution of tragedy & drama, at least as seen on the operatic stage.  Ah but I see that I’m way off in my grandiose predictions as I missed the logical trajectory. I could mention a story we saw from Bicycle Opera Project in 2017, namely Sweat, that showed us the exploitation of labour in the third world. It leads to what I saw tonight. 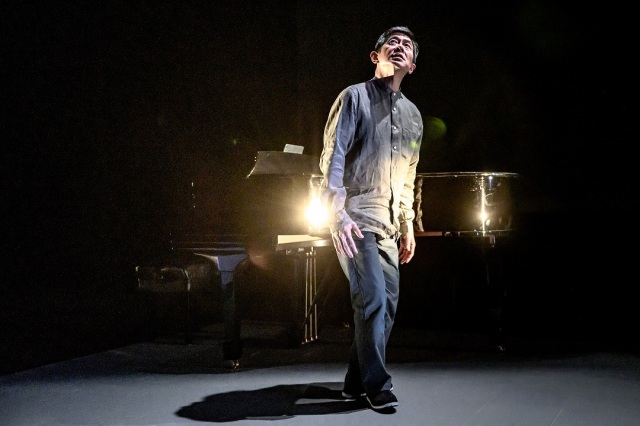 Njo Kong Kie in I swallowed a moon made of iron (photo: Dahlia Katz)

Of course it was the ultimate irony that my experience of this opera (a staged song-cycle? Perhaps genre doesn’t matter) was disrupted by a mobile phone going off beside me. For a few moments I wondered if the sound was part of the score. There we were, contemplating the life and death of someone crushed under the massive wheels of an impersonal industry, a world apathetic & distant, epitomized in that phone going off in the midst of the performance.

Pardon my tirade, it was breath-takingly perfect. The work that might sensitize the Canadian audience and would make us care, this portrayal of a brutally insensitive industrial world was captured for me perfectly in that moment.  If she had stood up in the middle of the show and walked out while she discussed where to meet for beer..? Only making it more obvious.

Njo’s music is sometimes heart-breakingly beautiful even as the text renders something unbearable. I think that’s as it must be. If instead the show went in the direction of something Wagnerian –where the music and the text and the scene all match in some sort of “total art”—you’d get something unbearable sounding & horrific looking to match the intimations of horror in the poetry. The startling contradictions of beauty bearing messages of heart-break & pain are unexpected, brilliant. That’s why it’s poetry. And that’s what I was getting at in using the word “oxymoronic”, where we have something contradictory. We are taken very sensitively into the world of Xu’s poetry by a choice in the mise en scene to illuminate the words for us, projecting chunks of text in English while at least some of those words are sung in Chinese. 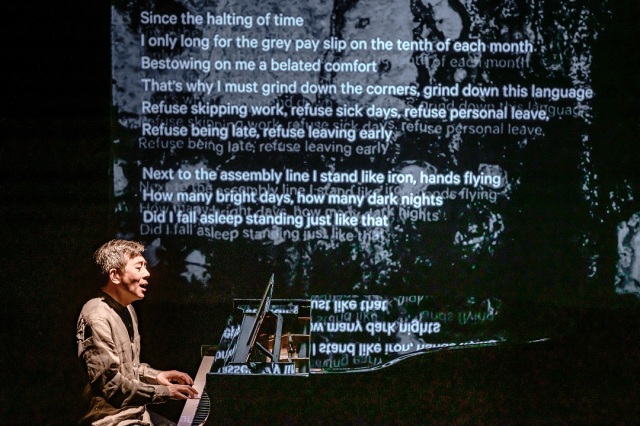 Njo Kong Kie’s I swallowed a moon made of iron continues at the Berkeley Street Theatre until May 26th.