As I’ve been listening to a 2015 solo piano studio recording by Mikolaj Warszynski, I’ve found myself wondering about the process, about how music is made and how it comes to be heard.

If a pianist plays brilliantly and no one hears: is there a career? Is there even music?

Not for the first time, I’m pondering how it all works. I’ve heard stories of singers walking into auditions, knocking it out of the park but being ignored ultimately because they’re not famous. In an industry that needs stars the arrival of an unknown can be a destabilizing force, a threat to those big names. While there was a time when recording labels & publishing companies were custodians of art, stewards of excellence, lately I wonder whether anyone cares.

But these thoughts came later. First came the CD, a series of performances to raise such questions.

We went from the unknown (unknown to me that is… meaning both the Haydn & the Szymanowski) to the familiar (the Liszt & Chopin), all the while making something fresh & new. When I looked more closely inside the jacket, the label is Anima in Paris, but I saw that there was a crowdfunding initiative to make the recording happen. Warszynski has roots in Poland (where he was born), Alberta and Québec, and has performed all over the world. While I may have missed something what I didn’t see was even one mention of anywhere in Ontario: relevant only because I ponder this question of process. Ontario is sometimes perceived as vainly self-important by the rest of the country, and no wonder when—for example—the operas we see downtown are from the “Canadian Opera Company”, shows that then get reviewed by The Globe & Mail who proclaim themselves to be Canada’s National Newspaper. While I laugh at the idea we are the centre of the world (especially when we endure mockery not just from Canada but Americans, particularly New Yorkers), I wonder about the career process, and whether Warszynski would be advised to appear in Toronto, where we’d all be lining up to proclaim his brilliance to anyone who’s listening. 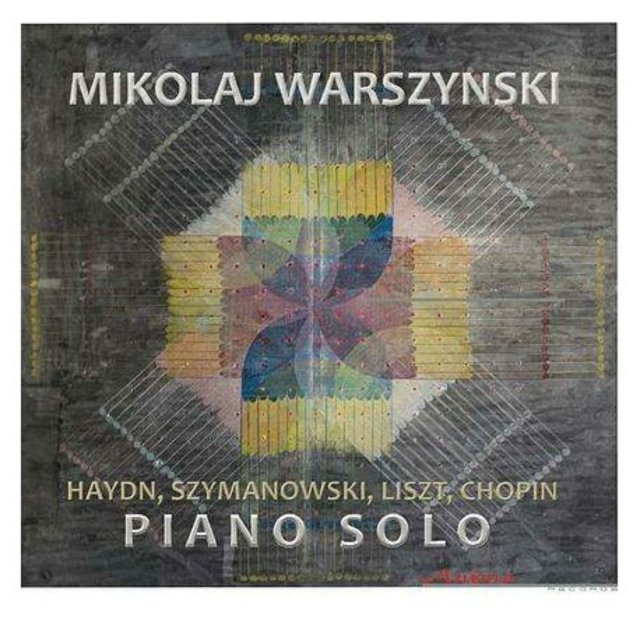 Okay enough about the process, and yes I can’t deny I am mystified when I listen to a CD that’s so original and so excellent that seems to have come and gone without fanfare, under the radar.

The Haydn Sonata is a glowing advertisement for the composer. A good performance should be like a speech in a courtroom advocating for the immortality of the piece & its creator, if not a testimonial to the player’s love of the music. Haydn and Mozart sometimes give us phrases that sound like people laughing aloud, full of the visceral pleasure of youthful beauty. Warszynski makes me think of Haydn on a late-night talk show, the composer’s comic phrases sounding new in the moment. The middle movement—especially in Warszynski’s pointed phrasing—makes me appreciate early Beethoven slow movements in a new way (because I should have realized the influence, made clear in Warszynski’s fascinating program note). I should have known:  that Beethoven isn’t quite as original as I thought, that maybe he’d heard something like this already from Haydn.

Warszynski could have spoken up at the keyboard and said aloud “and now for something completely different”. Perhaps in Polish?  as we went from Haydn to the first movement of Szymanowksi’s op 34 Shéhérazade. As in Prelude à l’après-midi d’un faune or Le sacre du printemps we begin with something almost improvised, like a preamble to what’s to follow, a delicate provocation to be elaborated with commentary & complication, both of the dramatic and harmonic as well. At times there are suggestions of what might in later decades be called “jazz”, even though I think it’s Szymanowski’s playful approach to sonorities & voices that takes us to that place. Need I add, where the Haydn is far from easy to execute, with Shéhérazade complex & virtuosic pianism suddenly rears its dazzling head. We are in a realm that is at times exotic at other times terrifying, which is only befitting an adaptation of this life & death love story. I wish I knew the piece better (and I’ll chase it down and attempt to play through it to see for myself), to have more of a sense as to what’s usually asked of the interpreter, and what’s original / added via the magic fingers of Warszynski.

But Shéhérazade is a very different sort of work from the Mephisto Waltz #1, not just because one was brand-new to me and the other is among the most well-known, well-worn, frequently programmed and if truth be told, critically under-estimated pieces. I put this piece in the same category with la boheme and the 1812 Overture, namely pieces so well-loved & overplayed that it’s hard to get back to the music sometimes and see it objectively. It’s in that context especially –where the music is almost like an aging movie queen in need of a makeover, turning up on late-night TV (uh oh I am repeating myself in my metaphors… perhaps this is the same show that had Haydn, as a guest? and the old dowager is on in the last 10 minutes), when the audience is all shutting off their TVs. It’s not Liszt’s fault that this piece became like the Sabre Dance or the flight of the bumblebee, an ear-worm haunting your head like Mephisto himself.  Although I suppose if you’re going to write an ear-worm (no mean feat!… what composer wouldn’t dream of this?), could the haunting ever be more purposeful? more symbolic?

What Warszynski gives us in his performance of the Liszt is counter-intuitive in its originality. Yes he plays it perfectly (like everything on this CD, regardless of its difficulty). But it’s not about the circus act element we sometimes see in a virtuoso performance, aiming for higher- faster – louder- wilder. Where I was mostly lost in the sound & fury of Shéhérazade shenanigans, again because I don’t know the work yet well enough to really experience it as a text or as a tone-poem with a story or scenario underlying its structure, Warszynski is story-telling with the Liszt. It’s a very segmented piece that can seem very wooden when there is no sense of an organic flow from one segment to the next, like a skater going from their double lutz to their triple axel double toe-loop combination. If the skating / dancing / piano-playing is really serving Liszt it must not be a series of stunts but a flowing story, a sound that serves to seduce us rather than impress us. I’ve heard a great many versions of this piece, and frankly became immune to the work for awhile: until hearing Warszynski.

And then we come to the four Chopin pieces that Warszynski would have you think of as a sonata, according to the program notes:
• Polonaise op 26 #2
• Scherzo #1
• Nocturne op 48 #1
• Polonaise op 53

It’s an interesting idea, one I don’t quite buy, but still: I love the ambition behind it. For recordings, for concerts, for church services: we are curators. Music is selected & organized for an effect. When I read the program note I don’t necessarily agree with what the music is doing, because of course we’re different people. Funnily enough I align the Chopin more with Haydn, for its neoclassical elegance & symmetry, for the delicate lines & clarity of composition, in sharp contrast to the density of the Szymanowski & Liszt. And of course the more obvious contrast is that Szymanowski & Liszt offer us program music or at least a romantic music with literary associations whereas the Chopin & Haydn are much more absolute in their conception, pure music not music seeking to tell a story. Being a Magyar I am also disinclined to see Chopin as a revolutionary, and more as an exile –not so very different from Liszt actually—which means I hear the Heroic Polonaise differently. I hear torment & conflict & celebration, as one finds in some of Liszt’s works, such as his Hungarian Rhapsody #15 (the Rakoczy March, a tune you would have heard orchestrated in Berlioz’s Damnation de Faust). After Byron, the romantic sensibility is always a painful mixture of passions. 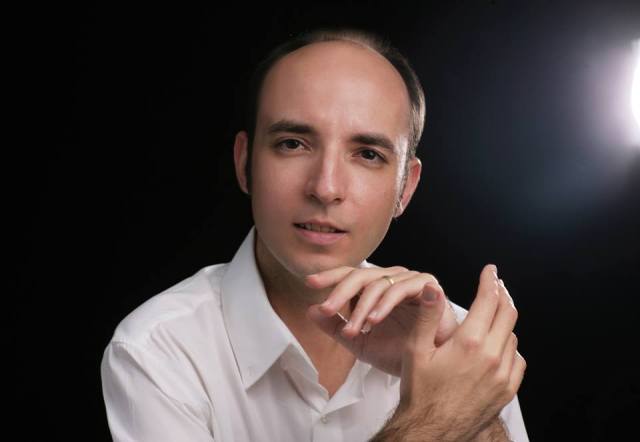 There are four performances here, all fascinating for different reasons. I’m especially moved by the Scherzo. Chopin’s four scherzi are a funny set. As with so many of these compositions, one may open the book and play through them, but one doesn’t necessarily encounter them that way in recital. The four scherzi are all stunning pieces, but the first is a quantum leap in difficulty beyond the other three. Warszynski plays what I am fairly certain is the most impressive reading of this challenging piece that I’ve ever encountered. It opens with a wild gesture that could be like a paroxysm or the grunts of animals having sex, one of the most passionate things ever written for the instrument. Warszynski makes the most of this. It’s in some ways the most frustrating piece (all four scherzi really, although for the first one, especially true), because Chopin puts his most beautiful music, bar none, in the middle of these phenomenally challenging passages. I was thinking of Brunnhilde, placed on her mountain surrounded by fire that can only be reached by a hero who does not know the meaning of fear. What did Dryden say? None but the brave deserve the fair? One must scale this rough mountain to come out into the serenity of the mountain peak where Chopin has placed his beautiful melody in all its pristine clarity. Of course the Ring cycle wouldn’t appear for decades after Chopin. But it’s the same. We can’t get to the serenity of that stunning melody in B major without transgressing the fire of the outer section in B minor, and if you just CHEAT and play it out of context it loses much of its beauty, because it is that drama, that struggle that makes that calm serenity meaningful. I’m grateful that on top of everything else Warszynski gives us a program note telling us where that charming tune came from, its associations for Chopin in his exile.

So there you have it. Warszynski is a young piano player and a professor of performance who deserves to be heard, whether in a master class or in recital. I hope he comes to Toronto sometime. He has another CD (a live performance) that I’m working at acquiring and I’m sure there will be more, as he’s yet young. The solo piano CD can be found via Amazon (click link).