Did they know when they programmed the Toronto Symphony Concert for September 2018 featuring Berlioz works conducted by Sir Andrew Davis that it was going to make a good recording?

Here I am now thrilled to be able to listen to a new Chandos recording of one of those splendid concerts, just released a few weeks ago. 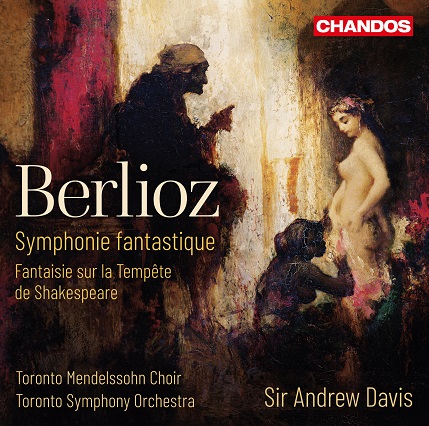 I attended one of the concerts, a fun program featuring the Fantaisie sur la Tempête de Shakespeare, a piece that works nicely as a curtain-raiser at a little over 14 minutes in length for the Symphonie fantastique that follows. Berlioz re-purposed the Fantaisie to close Lélio, Berlioz’s dramatic sequel to the Symphonie fantastique, and indeed when you’re playing the CD one may begin with this charming little work, or if one keeps listening after the SF, one gets to hear the music Berlioz understood as the finale to the piece subtitled “the return to life”. They complement one another so remarkably well, you’d think they were meant to go together.

Which of course they were…

You wouldn’t mistake Berlioz’s work for an accurate treatment of Shakespeare, but that’s par for the course with this composer. His Roméo et Juliette is largely the story told from the young Romeo’s point of view, a bold paraphrase rather than an accurate telling of the story with a poet’s passionate flourishes. Similarly with the Fantaisie, Berlioz is offering a commentary upon the Tempest rather than telling the story. We hear the airy sounds of the Toronto Mendelssohn Choir, a chorus singing rapturously to Miranda, and warning her of Caliban & Ariel. Two pianos magically tinkle away, the simple direct melodies of the choral writing reminding me of the Apotheosis of Marguerite in the composer’s Damnation de Faust.

In other words it’s very beautiful. Please understand that I don’t say this because I want Berlioz to faithfully set the Shakespeare. Indeed I’m not sure anyone has ever done that, and besides, this is way more fun.

And to follow we get a performance of the Symphonie Fantastique. It’s a full meal, this CD at almost 70 minutes when you add the 14:25 Fantaisie to the 55:33 SF.

The Toronto Symphony and the SF are a good match. It’s a wild boisterous piece that can furnish a great test for your car’s new sound system. The TSO have been steadily adding new young talents, so that the skill level has arguably never been higher. With Davis they have a steady hand to lead them into the realm of fantasy & hallucination, to the brink of madness and back. I enjoyed writing about the piece last fall a few weeks before Canada legalized pot.

If you’ve never thought a classical piece could be stoner music, I have news for you. Symphonie Fantastique is arguably the first such composition, long before the Beatles said “let me take you down”. The combination of clear sound on the recording with an accomplished performance makes this hard to resist. I’ve surrendered to it over and over.

In the opening movement Davis coaxes a gentle aching vulnerability from the soft introduction, genuine “rêveries”. In due course Davis brings it to vivid life, the pace to suggest you are elated as though something is pulsing in your veins, your heart rate surging out of control, then subdued, then wildly excited again. The ball of the second movement is led masterfully by Davis, so elegant and precise you can almost see dancers in period costume. In the scene in the country that is our transition to the druggy realm Davis lets it sing sweetly, building inexorably to the perplexing ending (the sounds of distant thunder, portending the bad trip that is about to erupt) and the real fireworks that follow.

Thank goodness Davis is a purist, a guy who takes the repeats as written. It’s especially powerful in those last two movements, one a nightmare march to the scaffold (the timbres so bizarre especially in the use of the bassoons, building to an execution at the end), the other a quirky send-up of everything that has come before, the lovely melody now parodied in the ghostly finale. These last two movements are big and loud like heavy metal: except the metal is the brass section & percussion, not guitars. While it’s done without use of amplifiers, that doesn’t mean it’s quiet. There are places to make you jump as though you were watching The Shining. Davis keeps the TSO in check, patiently building to fabulous climaxes in each of the last two movements.

And the bonus is that you can then go on to listen to the Fantasie after the SF. It follows rather nicely, because it was from the sequel after all. I’ve had it in the car, playing it endlessly, letting one follow the other, on and on. They’re literally made for each other.

And by the way Berlioz died a little over 150 years ago.