Tonight I heard something different from the Toronto Symphony.

The TSO’s annual Messiah in Roy Thomson Hall with the Toronto Mendelssohn Choir may seem like a ritual, but it actually varies from year to year.

Every time we get different soloists; more on that in a moment.

And some years they vary the actual musical score that’s being played. Handel’s Messiah has been presented in many versions, using many performance philosophies even if you don’t go for something radical like Soundstreams’ “Electric Messiah” or Andrew Davis’s muscular re-orchestration that’s been done a few times at the TSO.

This year we’re hearing Mozart’s take on Messiah. Eyebrows may go up in places where it’s not done the usual way, whether it’s the additional winds, the different phrasing & voicing or for instance when the soloist says “The Trumpet Shall Sound” and we get some trumpet and lots of horns as well. But there are always trade-offs. While we get the score as Mozart revised it we also get a modern orchestra and performing space, which had me wondering what this might sound like with a period band like Tafelmusik playing in a smaller space with a smaller chorus, rather than the big space & the large-scale sounds of the Toronto Mendelssohn Choir. We’re in a comparable situation to watching Marriage of Figaro or Cosi fan tutte done at the Metropolitan Opera House, where we may love the quality of the performance but without intimacy due to the big venue.

There are some fascinating choices in Mozart’s score that will look like heresy, for instance making the soprano sing an accompanied recitative for “If God be for us” rather than the usual number. But perhaps Mozart wanted to make the concluding choruses truly climactic. That’s how “Worthy is the Lamb” & the subsequent “Amen” struck me tonight.  He was working from a different set of assumptions than ours.

I got there early, wanting to read the program notes. As I sat I watched fascinated as the trombones practiced intently for the last 10-15 minutes before we began. I heard the intricacies of “Lift up your heads” and a few other passages as well.

Let me digress for a moment. While reading about Dvorak’s Slavonic Dances, I saw someone comment that everyone likely has a different favorite dance. I found that an intriguing thought, almost like a psychological test, where the choice of favorite tells you something about the person.

Perhaps one could do the same with Messiah? I say this having asked several singers to identify their favorite number in Messiah. Mine is “Lift up your heads”, a piece that never fails to excite me, a miniature drama that I believe enacts the process of discipleship & evangelism, of telling others about Jesus. It’s a wonderful piece of theatre, a back and forth dialogue between the men & women.

Mozart added this astounding trombone playing… It’s hair-raising. I had to resist the impulse to applaud afterwards, thinking that perhaps Mozart made it better, although in the silence after the piece ended I am sure the whole place noticed what a wonder we had just heard. That’s not the only place the trombones are kept busy.

The concert was conducted by Alexander Shelley, artistic director of the National Arts Centre Orchestra, although I believe David Fallis of TMC helped prepare the choir: who were mostly impeccable. The Mozartian sound –where the wood-winds sometimes add a layer, sometimes echo an extra voice, where the brass, particularly trombones, double lower choral parts—is at times a wonderful elaboration upon Messiah, a work that I thought I knew. But in many places I’m hearing all sorts of great new things. I’ll have to see if there’s a recording of this version available.

The four soloists added an intriguing dimension as well. I’d be hard put to identify four singers with greater credentials on the dramatic side, at the COC and elsewhere, namely soprano Jane Archibald, mezzo-soprano Emily D’Angelo, baritone Russell Braun, and tenor Isaiah Bell. The Mozart score juggles some of the assignments, although the best known ones for each singer are as usual, namely the soprano’s Christmas eve lead-up to the Glory to God chorus and “I know that my redeemer liveth”; the tenor’s “Comfort ye” and “Ev’ry Valley”; the mezzo’s “He was despised”; and the baritone’s “the trumpet shall sound”.

It’s a mixed blessing in Roy Thomson Hall, a place that works beautifully for the big climaxes but that is not ideal for the softer subtler moments. Shelley has a masterful hand on the tiller, leading us inexorably to the brilliant conclusion. The TSO & TMC are in wonderful form. 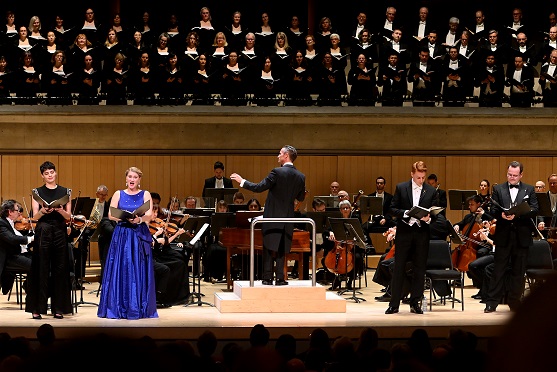 1 Response to TSO Messiah via Mozart