Posted on February 9, 2020 by barczablog

It’s called “Hansel and Gretel”, not “kill the witch”. And in the original the witch isn’t even the nastiest character.

You may already know that the new Canadian Opera Company production of Humperdinck’s Hansel & Gretel modernizes the setting to a city like Toronto. But director Joel Ivany does a whole lot more than that.

I tried to avoid spoilers in my review of the opening. I’ll do my best not to give too much away, but the main thing I want to observe concerns Gertrude, the mother of the two children.

In the Grimm version? Let’s look at a sample in translation.

Next to a great forest there lived a poor woodcutter with his wife and his two children. The boy’s name was Hansel and the girl’s name was Gretel. He had but little to eat, and once, when a great famine came to the land, he could no longer provide even their daily bread.

One evening as he was lying in bed worrying about his problems, he sighed and said to his wife, “What is to become of us? How can we feed our children when we have nothing for ourselves?”

“Man, do you know what?” answered the woman. “Early tomorrow morning we will take the two children out into the thickest part of the woods, make a fire for them, and give each of them a little piece of bread, then leave them by themselves and go off to our work. They will not find their way back home, and we will be rid of them.”

“No, woman,” said the man. “I will not do that. How could I bring myself to abandon my own children alone in the woods? Wild animals would soon come and tear them to pieces.”

“Oh, you fool,” she said, “then all four of us will starve. All you can do is to plane the boards for our coffins.” And she gave him no peace until he agreed.

The opera is a somewhat gentler version, as we see Gertrude erupt in anger when she comes into the kitchen while Hansel & Gretel are playing. In the ensuing confrontation, the milk jug falls & breaks. When Hansel laughs, she loses her temper, sending the two children off into the forest to find strawberries, threatening to whip them if they don’t bring back a full basket.

You might well say that we have no right to judge Gertrude for her reactions, not when they’re so poor as to be facing death from starvation.

I have been thinking about gender politics in how the parents in this opera are portrayed, especially as I look at the alterations Ivany made in his modernization.

As a parent I’ve often been troubled by the unfairness of it all, even though I have a huge advantage as a male.

You see it in the way the brothers Grimm and later librettist Adelheid Wette tell the story.  We might say that the mother is a bitch, bad tempered: but that’s part of the unfairness of it all. The father gets to be the kind loving understanding one, coming home later with his cheerful song and avoiding the conflict.

I’ve been intrigued by the fact that Joel Ivany is a dad, awaiting his second child with his wife soprano Miriam Khalil. Watching Russell Braun as Peter (the father) and Krisztina Szabó as Gertrude (the mother), I wondered about Ivany’ thought process as he played with the original. There’s not much Szabó can do with the character in that first scene, as it more or less requires Gertrude to send her children out into the forest, possibly to their deaths.

(SPOILER ALERT…if you don’t want to know what Ivany does to change up the story stop reading now!)

Of course the big thing Ivany is doing here is all about make-believe, turning the story into an exercise in pure imagination, and thereby taking the sting out of the children’s ordeal.

Instead of the usual adventures in the forest we’re watching a sandman & a dew fairy played by someone who lives in that same apartment building, putting on a costume.

Instead of a witch seeking to cook & eat Hansel, we watch a neighbour who has been colluding with the parents, who are playing along.  You don’t have to believe in the witch, not when children might believe. 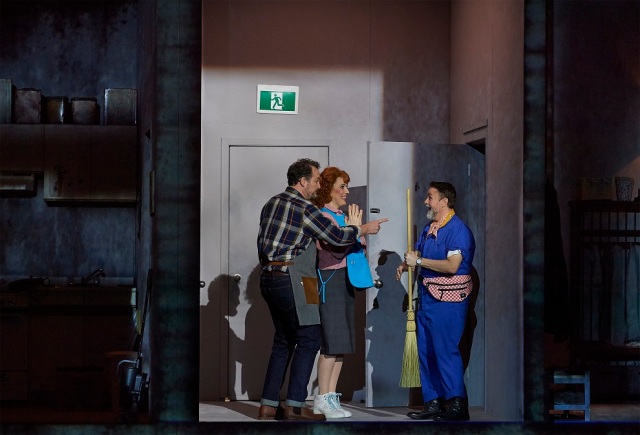 There’s lots more I could give away but I’ll stop there. The main thing is that Peter & Gertrude didn’t send the children off to die in the forest. Even so there’s only so much you can do with the text, although in places they did alter the surtitles (such that the words we see projected are not actually a translation of what’s being sung).

If it were up to me I’d take that much further. For instance when Gertrude supposedly sends the children into the forest to get strawberries the surtitle could just as easily say “go upstairs and beg for food from your generous neighbours” since the action now calls for them to stay inside the apartment, an imaginary forest perhaps but not a real one.

There’s lots to admire in this production, many moments of great beauty, some tremendous laughs. At the beginning of each scene we’re watching projections on the scrim that suggest children’s drawings, including a marvelous stylized Earth that we zoom in on during the overture. Seeing it today for the second time I still got all teary-eyed at S Katy Tucker’s images & exquisite taste.

It was lovely seeing Russell Braun for the second time today onstage, after running into him this morning at the celebration of Errol Gay’s life at St Clement’s Anglican Church. Russell sounds so comfortable & happy in this role.

Sitting in the second row we noticed a couple of things.

The sections of seats at either side are being left empty because of compromised sight-lines. 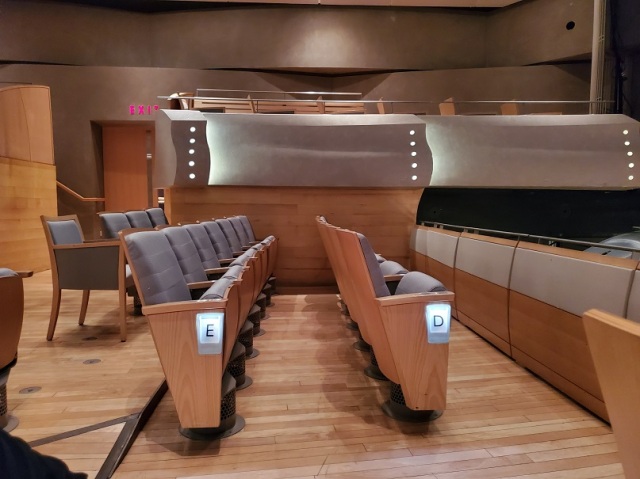 It was wonderful watching Simone Osborne and Emily Fons up close, a very believable pair of children whether pouting, dancing or eating. Anna-Sophie Neher’s fairy & sandman were even more adorable in a closeup view. Everyone was more relaxed and self-assured today.  I’m sure it will continue to get better.