I shouldn’t have needed a book to wake me up to the nuances & subtleties of my many connections to the University of Toronto. But it’s a bit like a family album, these beautiful pictures of loved ones to remind me of who I was, where I came from and ultimately who I really am.  This shiny volume is a most unexpected source of inspiration. 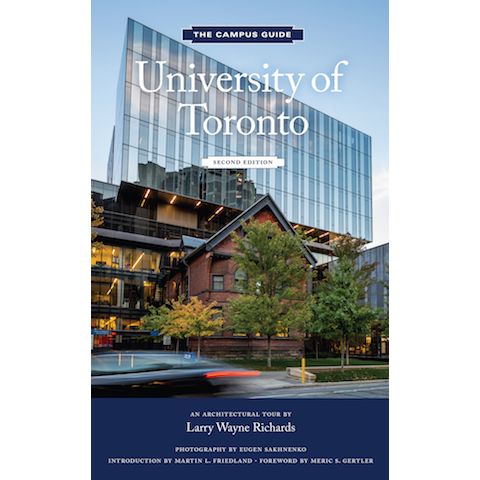 I’m speaking of Larry Wayne Richards’ campus guide to University of Toronto, from the Princeton Architectural Press. The recent second edition was given to me as a gift, something I left on a shelf for awhile but am only now properly appreciating.

Can a book featuring architecture make you healthier? It can if you start doing daily walks around your community. My gym has been closed for months due to the pandemic. But never fear, there’s still this beautiful neighbourhood to walk through.

This is a book with a series of walking tours on an enclosed series of maps.

And so I’ve been going across the campus, walking up Spadina Avenue or down Huron St, across Hoskin, down Philosopher’s Walk usually in the early part of the day, before it gets too warm and when there’s plenty of shade to allow me to hide from the sun.  The campus is especially quiet right now with the current lockdown, stilled but alive & expectant, awaiting rebirth. In some ways it’s the perfect time to sample views of these buildings from front, back, sideways, contemplating the meaning of it all.

Richards’ book is very comprehensive as it touches on every single building, each and every place on the different campuses, a good chunk of our city in fact. It’s a lot like a travel guide. That may be its strength but must also be its chief weakness. It can’t supply the meaning that goes with each part of the institution. That ultimately comes from each of us in our lived relationship to each part. I remember where I was when I saw Northrop Frye speak or Jon Vickers sing, the gallery where I was struck dumb by Kent Monkman’s paintings.  The University of Toronto has shaped & shaken me many times over the years.

Is the updating of a book like this one a bit like painting a bridge, where you have to immediately start over again as soon as you’re done?  Perhaps they can’t cover everything, as the book omits the George Ignatieff Theatre that was added to the Gerald Larkin Building sometime around 1980, nor is there any mention of Lu Massey’s name on the Studio Theatre behind Robarts on Glen Morris. I saw an error, as the lovely little house I know as 123 St George St was identified only as #23, an address that doesn’t exist, likely due to a simple typo that, alas, gets replicated in the caption to the photo of the building & on the walking tour map (but shown in its correct location next door to 121 St George St). But oh my there must be an enormous number of details to track in every department or discipline, and lots of fussy people like me each with our own version of history & quibbles about what is or is not considered a priority. There are over 150 buildings even without the little ones that are under the radar.   And I can see how there is a political subtext to what is or is not included in a book like this one, as though Professor Richards has to somehow decide which of the clamoring children like me in the crowd will get his attention. The stories recounted here are of the official variety, the tales etched into the building’s stones, to identify the founders & builders.

A book like this is an ambitious undertaking, a handsome reminder & a keepsake.   I will keep walking and staring from the outside, while using the book as a reference guide when I want to look up the details and the history, peering at the map for variations on my daily walking tours. I look forward to the day when we are once again permitted to go inside these wonderful places. In the meantime I won’t be lost. Not only do I have the guide but I carry my memories inside my head.