Soprano Jacqueline Woodley is as comfortable undertaking original music as she is taking on well-known classics.

Modern? Woodley created the role of Milica the bride in Ana Sokolovic’s Svadba with Queen of Puddings.   This past year she sang Arvo Pärt’s Stabat Mater, works by Tavener and Kancheli, Judith Wier, and music by Kaija Saariaho (re-mounted in Washington D.C.), and that doesn’t include her current project (see below…)

With her masters in opera from McGill & an ARCT in piano it’s no wonder Woodley is ready to undertake just about anything.

I ask Woodley Ten questions: five about herself, and five about Kafka Fragments. 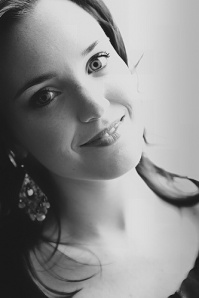 Well I’m Canadian for many, many generations and before then, British/Scottish, so we’re about as white anglo-saxon as they come!  (I always dreamed about being more exotic…alas…)

As a kid, I was a “spitting image of my father” as my Mom always said, but now I look a lot more like my Mom.  Personality-wise, I have a lot of both of them I think. I hate to talk on the phone like my Dad but I have a lot of my Mom’s ticks too (like the dishwasher and fridge always having to be organized in the same way)!

2)   What is the best thing / worst thing about being an opera singer?

Hard to pick one of each.  I think that the most important thing about opera is the collaboration that goes into the work.  I grew up in the choral tradition and it’s that love of making great music and getting into story and character with others that makes it all worth-while.  We get to meet so many interesting stage directors, musicians, stage managers, etc. that work hard to make something beautiful and it’s that joint collective that keeps it interesting.  We work and sing with such great friends and colleagues that it hardly ever feels like work.  Then on top of it, when you get to the performance part, there’s the added energy and co-operation with the audience that adds another layer.  It’s pretty exciting.

The worst thing I guess is a double answer.  I love that we get to travel a lot (I LOVE to travel…this season I’ve visited 5 or 6 cities that I’ve never before seen amongst others that I was so excited to go back to!) but it can be hard to balance family life amidst that.  In order to make a living, there are so many auditions and gigs away from home and I don’t think that ever gets easier on a couple or a family.  It requires a very patient and supportive network which I am very grateful to have!!

I listen to a real mix of music.  In the car or for cleaning I listen to dance music like Madonna, Lady Gaga, Michael Jackson, ABBA.  At home we listen to a lot of “oldies”: a lot of Beatles, Brel (I think Jacques Brel is my favourite singer/performer!), Juliette Gréco, Joni Mitchell.  For classical I love Mahler, Strauss and Brahms, especially Janet Baker and Maureen Forrester, Bach cello suites, and a lot of early music when I need to relax and be inspired.

4)   What ability or skill do you wish you had, that you don’t have?

So many things come to mind!  I wish I were better at sports so that I would enjoy them and I would get way more exercise!!  I hate and am terrible at pretty much every sport.  My siblings got that talent and I envy their inspiration and love of physical activity!  On a non-serious note, I wish I had the talent to close my eyes and click my heels and be instantly in  another place.  It would be so handy on long rides home at the end of a day, or to be able to eat dinner with my husband in Montreal when I am away!!

5)   When you’re just relaxing and not working what is your favourite thing to do?

I love to be with family and friends.  Whether it’s going on long bike rides with my husband, or catching up with friends over coffee and shopping, or seeing my nephews and nieces or my siblings and parents over dinner, I cherish those moments.  At the end of the night, I usually watch TV or read in bed with a glass of wine or a cup of tea and my husband, and that is bliss!

1) How does Kafka Fragments challenge you?

How does it not?!  I think, although I’ve done quite a few contemporary works now, and some weird early music pieces, that this is the hardest score I’ve ever prepared.  I haven’t yet met Kerry, the violinist, but it seems to be as hard to play as it is to sing.  The music is very disjointed and I often finish rehearsing wishing I had perfect pitch to help sing the jumps that are well over an octave or against the violin’s notes which are often very dissonant to mine.

Sometimes I rehearse one excerpt for 3 hours then go back the next day and it’s like I’ve never seen it before!!  It’s a slower process for me than I’m used to and of course we can’t go on YouTube and listen to 10 different singers sing it in different ways.  But now that I’ve listened to more of Kurtag’s works, and the more I practice this, the more impressed I am that it is very closely linked to the text and so I’m trying to go about it that way.  Although it can be a hair-puller to learn, it can be so much more rewarding putting something like this together with great musicians and people like Kerry, Topher and Joel than a work that has been performed for 300 years.  After the struggle to get it on its feet and to find the meaning and story, to try to relay and share that with an audience is pretty exciting once all the work has been done.

2)   What do you love about Kafka Fragments?

I love the texts. The piece is made up of many excerpts of Kafka’s diaries and letters, most  numbers lasting around a minute, a few more developed, but all musings ranging from the apparently ridiculous to the mundane.  I love the idea that these were Kafka’s private thoughts and yet any writer must know that they might likely be published one day so I’m fascinated by the stories behind each of these “fragments”.  It’s the kind of material that can be dissected for hours and your take on it can change daily no matter how simple the sentence.  On the other hand, some are more observational and amusing and you just wonder what prompted the thoughts.  Kurtag really clearly bases the music on his interpretation of the text: sometimes the music alone is description of the text.  For example, I love the violin solo in the last piece, it is so evocative and haunting.  Throughout, the violin is as much a narrator as the voice. The fun is in interpreting both  Kafka and Kurtag. I love the challenge of finding the depth and character behind each musing and musical narrative.

This is often what I love about modern works, there are so few recordings and performances available that we as performers are truly free to find our own voice and with our colleagues, to create our own performance without audiences leaving saying “you know, I heard Maria Callas do this at La Scala years ago…” or “I just hate what she did with her Susanna!”  Just knowing that I don’t have to do the exact same phrasing or cadenza as someone else in order to be enjoyed is very freeing for me, and I love the added challenge of trying to make a phrase that can begin so strangely in someone’s ear sound beautiful and logical.

For example, I loved doing Svadba with Queen of Puddings for the reaction, the over-arching sweep from audible eyebrow raising and uncertainty at the end of the first section to the sigh and emotion after the last chord as people got used to and familiar with the texture and strange narrative and musical language.  It’s the same with every modern piece that is enjoyed for the first time, there’s a period where you need to acclimatize to the musical language and then you can start to appreciate it and that’s the exciting part, hearing it for the first time!  I hope it will be the same with the Kurtag for our audience!

3) Do you have a favourite moment in Kafka Fragments?

Oh my gosh, so many great moments.  I love the humour and sarcasm of so many of the excerpts, but I’m always a sentimentalist, so I think my favourite is the last number.  The music is beautiful, and it talks about a pair of snakes crawling through the dust in the moonlit night. Apparently Kurtag thought of himself and his wife as these two snakes, and I find it quite moving.

4)   How do you relate to Kafka Fragments as a modern woman?

Well you know, that’s a good question.  I have often wondered what prompted Kurtag to write these for a soprano instead of a tenor or bass.  But Kafka’s words ring so true and are so humanistic that I think they can be understood and interpreted by anyone.  Sometimes I feel that I am the voice experiencing, and other times, it’s almost like I’m reading the text instead of feeling it.  Some are narrative and I really feel like I’m sitting on a bench as Kafka, observing the happenings around me, and I feel quite gender-less.  These observations are rather timeless and so can be very modern or as old as the times. Sometimes I feel rather schizophrenic singing them which I tend to love as each character and voice can feel so different.  Kurtag has really given specific voices to each piece and I love shifting from woman to man to cat to Schumann.  In that way, I feel like I don’t have one overall idea or personality so I can actually experience each piece in a different way, sometimes personally, sometimes removed.  That’s a rare opportunity.  Usually in opera, we work so hard to create one full, well-developed character that it’s fun to play so many different characters or voices within a work.

5) Is there an influence you’d care to name that you especially admire?

I can’t say there’s only one.  It started with Jeanette Steeves and Jackie Hawley when I was a kid, who were my first voice teachers and choir conductors.  They instilled a real respect and excitement for music and creating music with others, and married singing and acting for me that has most definitely continued to fuel me and allowed me to truly enjoy this career.  Then there have been people like Wendy Nielsen, who has inspired me to try to be a good, down-to-earth person as well as a polished, interesting singer, to “have it all” while always keeping integrity in life and singing.  In lessons she always searches to hear my voice in each note, and in my opinion, I feel it’s also reflected in how she encourages us to live our life as well as sing.  To find my rep and to challenge my voice and to be happy in my life. That to me is more important than super-fame and I always try to keep a happy balance.  It is never perfect or finished but it’s always a work in progress!

Against the Grain Theatre (AtG) presents Kafka/Janáček/Kurtág, a double bill of two daring song cycles on March 1 and 2, 2013 at 8 p.m.

Tickets are $30 and are available at www.againstthegraintheatre.com. The Extension Room is located at 30 Eastern Ave., Toronto, ON.

1 Response to 10 Questions for Jacqueline Woodley