RWB Going Home Star: the language of truth and reconciliation

Posted on February 6, 2016 by barczablog

I witnessed something extraordinary and beautiful. The Royal Winnipeg Ballet created a full-length work titled Going Home Star: Truth and Reconciliation, one of the most ambitious pieces of theatre I’ve ever seen, a ballet so remarkable that it could be understood to be part of the broader mandate of the Truth and Reconciliation Commission (or “TRC”) itself.

The TRC is a component of the Indian Residential Schools Settlement Agreement.

Its mandate is to inform all Canadians about what happened in Indian Residential Schools (IRS). The Commission will document the truth of survivors, families, communities and anyone personally affected by the IRS experience… The TRC hopes to guide and inspire Aboriginal peoples and Canadians in a process of reconciliation and renewed relationships that are based on mutual understanding and respect.

We might understand TRC the same way as for example Black History Month or Holocaust Memorial Day, namely a “process of reconciliation and renewed relationships that are based on mutual understanding and respect”. Art that furthers that process, both as a guide to the Aboriginal peoples and for other Canadians surely works to promote the mission of the TRC. 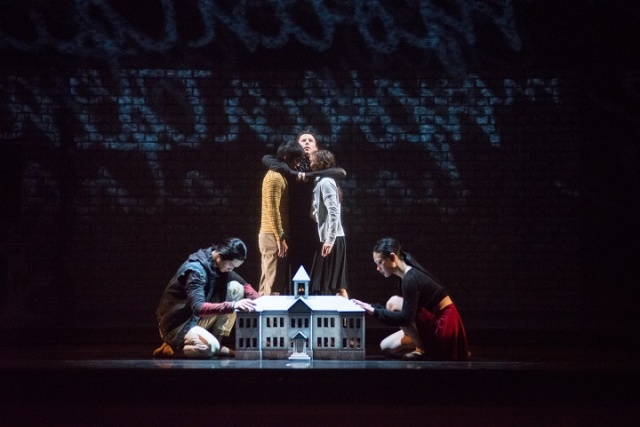 Royal Winnipeg Ballet Artistic Director André Lewis commissioned the work, as he explained, after being approached by Elder Mary Richard (Ah Kha Ko cheesh), to whom the work is dedicated. This is a ballet that is part of a broad consultation, a multi-cultural work that bridges the gaps between cultures. Ballet is an art-form of our dominant European culture, and so we experience this work at the intersection of peoples, languages and art-forms. We began with a drum chant that seemed to consecrate the space, and also heard from an elder who spoke a prayer in one of the native tongues. While the main characters are both European and Aboriginal, the conversation is still mostly on the turf of the Europeans, being a ballet. This work speaks eloquently to people like me, who may have a vague idea of the Residential Schools, but until now did not have a concrete mental image of these events. This is like Schindler’s List or Amistad in telling a story of a race’s oppression.

But it’s not a film, it’s a ballet, and I believe that choice of medium was a wise one. I recall a conversation with Elliot Hayes in the 1980s that still informs my thinking decades later. At the time I was cautioned that my operatic project contained “big ideas”, spoken in a tone to suggest that I’d infested my text with something bad, because of course such things are unwieldy, powerful and almost impossible to control. But I think this is a fork in the road that might be key to deciding the ideal medium.  Why bother with music if your words already give you what you want?  If you want something factual and concrete you make a documentary or a play in a realist / naturalist dramaturgy. If you’re dealing with universals, however, you get specific at your peril. Opera and dance are more amenable to symbolic matters, rather than finely honed topics. Ideas don’t get any bigger than this –the matter for the TRC—and therefore this story (as created by ​Joseph Boyden) was ideal for ballet. You get rid of most of the words –which have the unfortunate tendency to pin down the meaning in specifics and superfluities—and stick to a few key archetypes, namely the characters standing in for humanity. The music furnishes a template for us to react to the story, a plot designed to take us on a journey.

And so the conversations that are prelude to Going Home Star—that is, the collaborative discussions that lead to the creation of the ballet—are a wonderful miscrocosm of the TRC itself. Finding a common language, for example in movement vocabularies, in story-lines, and in music and sound, are themselves journeys very much like the TRC itself, a negotiation between European and Aboriginal, old and new, concrete and abstract.
I was particularly impressed by the work of composer Christos Hatzis in creating the score, a massive composition that energizes the dance. Sometimes we’re listening to pattern music that’s rhythmic, even jazzy, at other times, assembled from samples of noise. Sometimes we hear replicated music.

One passage resembles a wacky version of Opera Atelier’s baroque ballet, as we hear Hatzis parody the music of Jean-Baptiste Lully, the court composer of Louis XIV, as a group of dancers in ornate clothes with miniature naval vessels as hats, mince around, then begin to scratch as we’re told that they needed aboriginal help coping with black flies. And in short order the metaphor is re-used, as we hear that the clergymen have become like ticks infesting the aboriginals.

In another passage Hatzis samples the best-known theme from Swan Lake, the falling third of that phrase repeated, and gradually dropping in pitch a bit like the Doppler effect of an ambulance siren as it passes. The score is full of such moments, as small samples of train-sounds, human breathing or even something resembling a snore gets inserted into a musical phrase. The intersection of styles of music and movement was aggressively inter-cultural, as though people of different backgrounds were meeting face to face, while trying to reconcile their differences: those very same differences that are the basis of the TRC itself.

In one scene – a flashback to life in the Residential Schools—we see two young people with a clergyman. As we’re in the realm of dance, he might not move like a real clergyman, because he’s so fluid in his movements that he might be a ninja, practically flying around the stage. But I am reminded of an operatic equivalent, namely the scariest person in Nixon in China: the elaborate coloratura of Madame Mao. Just as her vocal fireworks are terrifyingly agile, so too with our ninja-clergyman. For awhile, the two kids are enjoying their lives –as youth will—even though the clergyman regularly peers in through a hole in the wall that is comical with scary overtones. When he eventually catches them in the act of smoking, it leads to a virtuoso flogging and abuse.

A photo from the Truth and Reconciliation Commission website

There’s so much more to it, as I am barely scraping the surface. Going Home Star is as utopian as the TRC itself, pointing to a redemptive outcome. The work is cathartic, including a moment when one of the residential schools is shown burning. The release of tension is as much in the music as the action, but also more simply an enactment of historical oppression that is then answered, pointing to liberation. This a work that needs to be seen again, that should be undertaken by other ballet companies, with a score that deserves to be played and/or recorded. I recognize that this may not be the way things work, given that the piece is so solidly identified with RWB. But other companies should take on this wonderfully Canadian – aboriginal work.

Somewhere in the program I read what the title means: that the North Star leads the way home, although i don’t think there’s any way to communicate that in a ballet. The synopsis in the program is useful reading before the show to enable one to understand the specifics of the story, even though –as with most ballets– one doesn’t need to know the specifics to follow along, to be swept away.

Going Home Star will be presented again Saturday night at the Sony Centre, as part of a national tour.

4 Responses to RWB Going Home Star: the language of truth and reconciliation