The second cast in the Canadian Opera Company’s Carmen production directed by Joel Ivany brought us into a more realistic world than what we’d seen in the opening night’s cast.

This is a cast that’s physically beautiful, from the heroic profile struck by David Pomeroy as Don José, the powerful voice & presence of Clémentine Margaine’s Carmencita (delivered with a proper Spanish accent in the dialogue), the statuesque beauty of Karine Boucher and the effortless charm of Zachary Nelson as Escamillo the bullfighter. That’s in contrast to the more symbolic impact of the first group, whether in the distant stillness invoked by the interpretation of Russell Thomas as Don José, the occasionally introspective Carmen of Anita Rachvelishvili, or the big Escamillo of Christian Van Horn. Where the first cast put me in mind of a conceptual encounter between virginal innocence (Micaela & Don José) and arrogant experience (Carmen & Escamillo), which is to say something theoretical and in the mind, the second cast seemed more genuinely sexual, more at ease with their movements and with their bodies. 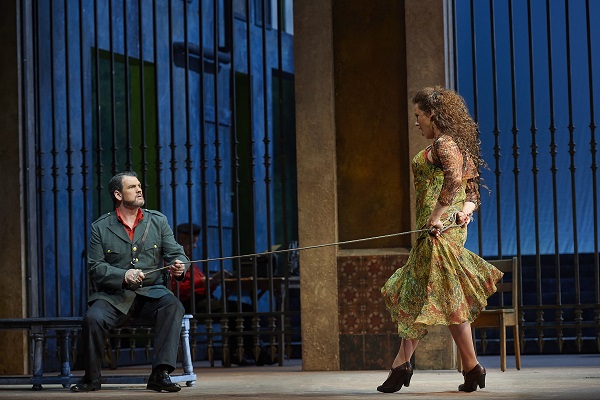 This is also a cast whose French is mostly better than the other cast, more intelligible and more expressive with their text, which shouldn’t be surprising when the female leads were given to a pair of Francophones.

We heard wonderful power in the voices. Margaine’s voice is a wonderful instrument, particularly rich in the middle, and seamless from top to bottom. David Pomeroy’s voice is blossoming beautifully, sometimes employing a careful focus to save vocal resources, but blazing hot when he cut loose. Boucher is a very sympathetic performer who wins over the audience, while Nelson seemed to be having fun throughout.

Having heard this production  twice, I am a bit conflicted about the work of conductor Paolo Carignani, whose tempi are on the fast side. While I usually like that, I felt the entire cast was more than a bit in awe of him. Is it my imagination, or did the chorus stand together throughout in clumps, staring at the conductor for fear of missing a cue..? He seemed to be battling his soloists at least a couple of times, although the big ensembles –for instance the Act II quintet—were of course very tight: while the singers hung together in a group staring at the conductor. The results sounded pretty good, the orchestra responding throughout with a clean crisp sound. And in fairness I saw lots of give and take during Pomeroy’s big aria and Margaine’s Habanera. But when in a pair of performances I see singers off by a couple of beats, I’m inclined to wish the conductor would adjust rather than the singers. Yet it does sound wonderful on the whole (as I said, I’m conflicted).

And even though i knew it was coming, Act IV was still a fresh & vivid creation.  Both casts offer something valid & original.

Carmen continues at the Four Seasons Centre until May 15th.