Chaotic Dollhouse all too real

Here’s what I found on the Coleman Lemieux website concerning Dollhouse, their new work currently being presented by Canadian Stage:

Dollhouse is a work created for galleries, cross-disciplinary exhibitions, music centres, theatres, and all manner of other places of learning and discovery. One day set up, two performers, one technician.

Considering the situation we find ourselves in today the visual metaphor of a man drowning in his surroundings is timely. Bill Coleman, a master performer plays the role of modern fakir as he suffers through what at times are almost comic situations on his way to a symphonic chaos of sight and sound.

I am glad I didn’t see any of that until later, as I came without any expectations, wide open for what I experienced tonight.  It’s about an hour long, and yes it does straddle the boundary between serious and comical, a bit of a challenge to interpret, but in the best sense.  At times I felt we were experiencing Butoh, but without any Buddhism.  This is a very slow & patient examination of the here and now, sometimes slow and gentle, sometimes as urgently disordered and stormy (to insert a context onto something abstract in its disorder) as if we were out on the heath with mad old King Lear. 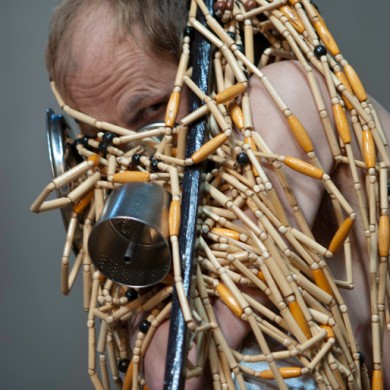 We may tend to take for granted that music or sound functions in support of action or dance or singing, that the conventional aim is Gesamtkunstwerk, or in other words a total art that employs all media strategically together.  In a scary movie, the music tells you when to be scared, while in a romantic movie we can tell when to have warm fuzzy feelings.

But what if one disrupts or ignores those usual relationships & procedures?

What if the sound were generated by the performer’s movements?

What if the sound wasn’t easily amenable to explanation, but instead seemed to be a complex, even an independent phenomenon without any clear purpose or function, seemingly autonomous?

What if what you saw onstage resembled real life? It’s almost inconceivable in a world where dance is always purposeful, virtuosic, strategic.

I don’t want to give things away, as a believer in spoiler free reviews, but you should know that we’re in a realm of serious performance art, that for me was extremely powerful. The fact that we aren’t in the usual place of virtuosity means a great deal.  This is not one-two kick-turn dancing and pardon me if I invoke the director brought in for Springtime for Hitler, in The Producers.  But dance is sometimes so dreadfully unwilling to let go of its fetish for bodies and showing off.

Sure (to quote The Producers again), “if you’ve got it flaunt it”.  But dance can be so much more.

The most important touchstone I can mention is one seen in Toronto in June 2012,  during Stewart Goodyear’s Beethoven sonata marathon in 2012. You may recall that  Melati Suryodarmo danced on butter, deconstructing the whole idea of virtuosity.

Watching her you recognize a whole other set of co-ordinates for dance beyond Olympian ideals such as higher-faster-stronger, or the notion of beauty & elegance.  She’s falling down! ….and that is her dance.  Speaking as an older guy, who sat in a theatre full of older people, it’s fabulous to watch someone slipping and falling, struggling not to fall, or coping with real hazards and obstacles.  For a disabled person, for an older person (recalling my conversations recently with my mom about a friend who has fallen and hurt herself): this is the most urgent drama of all.

This is the most realistic and life-like thing I’ve ever seen danced.  Disability is something dance seems to hate (recalling the time I was trying to talk to a couple of choreographers back in the 90s and they seemed grossed out by my bad posture, which btw is caused by arthritis, and unable to even converse without trying to lay hands on me to adjust my stance….which is hysterically funny in retrospect), perhaps troubled fundamentally by the ultimate insult to the instrument, that the body breaks down.

But it does break down. It ages. 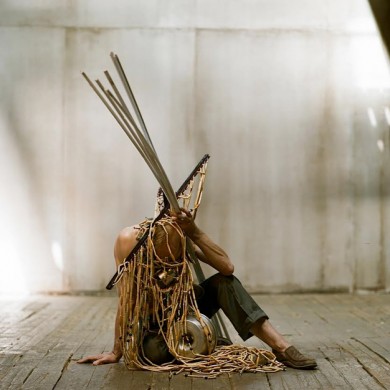 And Bill Coleman was speaking to this older audience, in his struggles to move.  At the beginning I was shocked that he had his body making noises (I won’t tell you how, as this is something you discover, part of the magic of the show), reminding me gulp of my own joints that sometimes make crackling noises.  We are imperfect instruments all of us, and even those who are close to perfect are aging and losing their virtuosity to the ravages of Father Time.  Not me, i lost any notion of perfection a very long time ago.

There’s an image in this show that I will give away, because knowing about it can’t prepare you for the visceral experience of seeing it.  Coleman at one point steps forward in a jacket with a bunch of arrows in his back, as though he were Achilles the moment before death.  How does one take the stage, when riddled with arrows?  I suppose you’ll have to see the show to find out. But don’t expect one-two kick-turn.

Some of it is funny, some of it poignant, peaceful, painful.  It gets pretty loud at times.  For me this is the most genuine dance piece I’ve ever experienced, possibly because it isn’t really dance.  It’s music that is –to use composer Gordon Monahan’s concept—sculptural.  Some of the sound comes from noisy objects, some from the creations he’s put onstage, reminding me of Rowland Emett or Rube Goldberg in his gadgetry.  The stage is alive de facto, making its own noises and movements, and Coleman moves and makes sounds himself.

This isn’t the Nutcracker.

You may be put off if you dislike art or theatre that resists telling a story and instead requires you to think, as this is a challenging piece. I quite love it.  In places I laughed although it was nervous laughter from someone who saw fragile humanity onstage tonight.

Dollhouse continues at the Berkeley Street Theatre this weekend until Sunday November 20th.