Although I missed Robert Lepage’s 887 the first time it came to Toronto in 2015 (during the Pan Am Games) I’m glad I was able to see it today with Canadian Stage at the Bluma Appel, in a short run that ends Sunday April 16th. 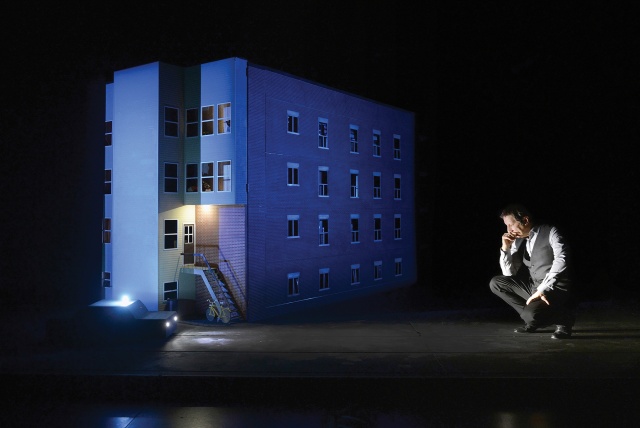 887 has been all over the world, but speaks with a particular edge to a Canadian audience, especially in 2017. Last night I saw the latest Sesqui: 2 minute compositions in the Toronto Symphony’s Canadian Mosaic series. While the Truth & Reconciliation Commission has shifted the consciousness in this country, to at least make some gestures in the direction of the Indigenous peoples and their cultural holocaust, 887 is a treasure trove of memory to remind me of an earlier version of the national dialogue, comprised of two founding cultures.

887 is a play that is at once, a meditation on memory, an auto-biographical testimonial by Robert Lepage himself, a funny two hours, and a highly political study of recent history. Several times I thought I saw the kernel, the main well-spring of Lepage’s inspiration: and yet so thoroughly are the different threads sewn together that I can’t really say for certain.

The whole question of how and what we remember makes up 887, from the beginning as Lepage muses over phones and phone numbers, how he can’t recall his own phone number, to questions of future memory –posterity that is—in the question of how he will be remembered via “cold cuts”, the pre-made obituaries for famous people.

Lepage is of course the consummate theatre artist, one of the country’s great exports, thinking of opera productions via his company Ex Machina, with whom he collaborates on this occasion as well for a total theatre experience. The literal design concept underlying 887 reminds me a bit of what we’ve seen in Needles and Opium the Met Opera Ring and Damnation de Faust. In Needles & Opium we watched a rotating box, the addict inside struggling to cope with a moving horizon that simulated the altered reality. For the Ring we saw a big expensive machine that both simulated and symbolized a world in flux, protean, changeable.  In Faust Marguerite sings of the flaming ardor of her love, as we watch her image begin to turn into flames on a huge screen behind her.

In this instance we’re in the presence of memory, watching Lepage go down memory lane with his family, with his neighbours, his city and his explanation of the memories: which is who he has become and who he continues to be. It’s fabulously rich and rewarding.

One could easily underestimate this man who captivates us with his deadpan story-telling skills, who kept me and everyone else laughing for much of the show. He’s up there for the whole show, joking about his ability to memorize lines, while he speaks for two hours. Maybe there’s some sort of prompter (recalling his joke about a prompter’s box, one of the great things he may have wanted to borrow from the opera house), but even so on a purely physical level this is a magnificent display. As I write this it’s, oh, 6:46 pm, and Lepage will be getting up there again at 8 pm, for another two hours in two languages (have no fear, when he starts speaking French he mercifully offers surtitles, or in other words he does indeed “speak white” for most of this show in an anglo city).

For those of us as old as Lepage or older, certain moments will push buttons differently from those who are younger or those who aren’t Canadian of course. Seeing the moment when De Gaulle says “vive le Québec libre” from this perspective is illuminating. The flag debate is also there.

We are less than two weeks from the opening of Peter Hinton’s revisionist take on Louis Riel with the Canadian Opera Company. While Riel was Métis –half French & half indigenous (perhaps Cree, I do not know)—the opera’s focus reflects the cultural assumptions at the time of its composition; the chief anxiety was Québec, an increasingly alienated francophone culture providing the subtext for Mavor Moore’s libretto. As far as I can tell Hinton is seeking to redress the balance –to reconcile the French side of Riel with his Native side—but it’s very important to recognize just how volatile Canada’s conversation was in the 1960s and 70s. Now, when the PQ are dead in the water one could easily forget.

I’m grateful that Lepage reminds us.

This entry was posted in Dance, theatre & musicals, Music and musicology, Opera, Politics. Bookmark the permalink.