Tonight’s concert by the St Lawrence Quartet launching the 2017 Toronto Summer Music Festival, the first under their new Artistic Director Jonathan Crow, has me wishing I could spend the next few weeks doing nothing but going to TSM concerts.  There was a sense of occasion, a genuine electricity in the air.  Crow explained that the theme for TSM 2017 is taken from the Sesquicentennial of Canada, as in a focus on Canadian composers and performers.  When I saw tonight’s program –placing an R Murray Schafer string quartet between quartets by Haydn and Beethoven—I wondered how he would compare.

While I’m as nationalistic as the next guy I figured

I did not expect that Schafer would more than hold his own, that he’d seem to be a peer of the two icons with whom he shared the stage.  Some of that needs to be properly attributed to Crow & the St Lawrence Quartet whose intelligent programming brought out the complementary aspects of the three works.  And nothing was held back in the performance of the Schafer.

From a lush romantic interpretation of the Haydn Op 20 #2 in C Major, a textbook demonstration of how quartets usually work, we went to the Schafer, a three movement composition that deconstructs the quartet experience in three vivid movements.

The first movement began with Christopher Costanza, cello, alone on the stage.  He was playing notes on two strings that sometimes were close to the same pitch, sometimes slightly different, calling our ears’ attention to the phenomena of tuning, harmonics, and the actual creation of the sound from first principles.  In time we hear a second musical sound from backstage and we see Lesley Robertson, viola, gradually coming to her place onstage.  In due course we also have each of the violins arriving, namely Geoff Nuttall and Owen Dalby. 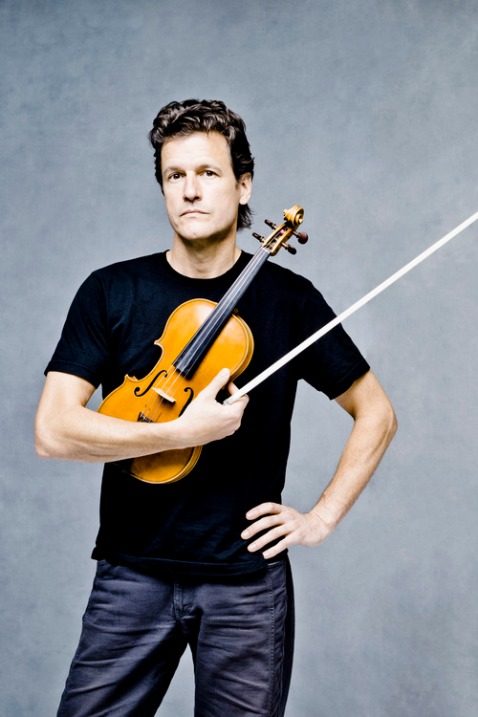 Schafer is known for operas & spectacles that have something of the “happening” about them, so I wasn’t surprised when I started seeing his string quartet in dramatic terms, indeed, wanting to understand the piece for its dramaturgy.  Where the first movement gradually assembled the players into a team, we were watching a piece that was busily problematizing the usual principles & relationships of the quartet.  Were we watching four players working together from the same score, or were we at times watching four independent agents improvising?   And part of this framework was the audience’s apprehension of the event.  At times we could barely hear what was happening backstage or in the auditorium as the players gradually approached and assembled into an ensemble.  Some of the movements by the players were more flamboyant than usual, indeed at one point I thought Geoff Nuttall, who seemed to be channeling Lyle Lovett via the violin, reminded me of that “Walk like an Egyptian” song from the 80s, in his movement vocabulary.   Were we watching music played by virtuosi, or a performance where the musicians enacted roles? I think this is the sort of question Schafer suggested to us.

In the second movement Schafer held up a distorted mirror to what we had been seeing and doing in the Haydn (or any concert situation).  Where the first movement was slow as the ensemble gradually coalesced onstage, the second movement was a visceral appeal to my most immature impulses.  I think if the audience had been comprised of children, we would have been clapping and stomping along with this vibrant pulsing composition, indeed I wanted to jump to my feet and dance.  Of course that’s not done at Koerner Hall when a string quartet is playing, so I pretended to be an adult.  I wasn’t the only one, as i heard lots of giggles.  This middle movement included some fast passages, but often augmented by vocal work from the quartet. Yes I was stifling my jubilation, although in places the audience laughed loudly.  At times I thought the quartet resembled the Swingles Singers, after they’d been afflicted with Tourettes; and not to mock anyone with that condition, but the players seemed to be seized by primal impulses, the music seeming to emerge from the id of this quartet, pure raw irrational noises.  The playing –controlled as it was—seemed galvanic, as though someone were shooting electricity into them.  I was reminded of “talking like a pirate day” on Facebook, with some of the “arrr” sounds coming out of the players.  And then in the last movement, for the most part Schafer confounded expectation by having large swaths of unison among the four players.  How elegant they sounded, even if these weren’t the melodies of a Haydn or a Beethoven.  And then Nuttall rose to his feet, began to play a busy but beautiful solo passage, while the other three: cohered into a tonic chords.  Nuttall took his solo into the wings, fainter and fainter, against that solid assonant affirmation to conclude.

I was not the only one  impressed, as the huge reception turned to the Master in the hall, namely Schafer himself. I’m thrilled that he got to hear the work played with such lucidity and commitment, and especially that it –and he– were so warmly received by this enthusiastic audience.

We closed with Beethoven’s Op 131 in a reading that was probably the most conservative interpretation of the three works presented.  I’m not complaining, not by a long shot. Where the players showed flamboyance and daring in the Haydn—thinking especially of Nuttall & Costanza for their bold cantabile playing—they approached the Beethoven with a steady consistency, wonderfully tight with one another.   It was bliss watching their inter-actions, the eye contact and body language, accentuating the stunning sounds.  This is all one could ask for in chamber music.

Does Crow’s arrival signal something different from TSM?  I don’t know, although a new artistic direction and the energies of youth are usually welcome.  I’m looking forward to seeing more of TSM, indeed I wish I had the time to dive in every night.