Syrinx: The way the future used to sound

One can’t write objectively about friends, especially when those old friends are beloved pieces of music.

I’m very fortunate to get all sorts of wonderful recordings through the mail.  One of the best things about the summertime, when there are fewer concerts, is that I have a chance to catch up a bit on my backlog.  I recently had the chance to explore music I first heard in my youth through one of those windfalls in the mail. 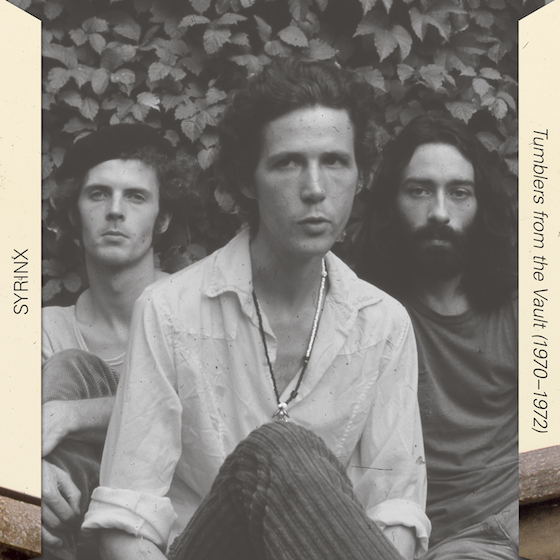 Tumblers from the Vault from Syrinx

Tumblers from the Vault tumbled into my life, a Syrinx retrospective of the years 1970 -1972.   Syrinx can be understood as a pop music band, comprised of three people

But while they’re understood to be a band I think it’s a misnomer to think of their compositions simply as pop music.  Or maybe it’s just that I see depths I never noticed when I first encountered them.  Hindsight has a way of being 20-20, to fill in gaps of understanding. When I first heard this music I was moved, excited, but also stirred by the ambiguities of the music.  I recall getting lost in the sensations without understanding how they did it. At times I could tell that there was electronic music, but it was rarely foregrounded, instead blending into a mix.

My headline comes from my first encounter with Syrinx, namely “Tillicum” a piece used as the theme for a CTV series called “Here Come the Seventies.”  I had such a serious obsession with the opening theme, that sometimes I’d stop watching the show after I’d heard the theme.

The only thing I can compare this to is my first experience of Walter Carlos (later Wendy Carlos) via A Clockwork Orange. I had never heard or felt anything quite like that. I think it’s fair to say that Syrinx were ahead of their time, and even now have a remarkable freshness to their sound.

At times you’re hearing something resembling world music, with melodic turns and chord changes suggestive of other cultures and musics.  Some of their music resembles the pattern music of Philip Glass, which is especially interesting when one realizes that his first big recordings happen later.  I’m not interested in questions of who influenced whom, not when so many musicians seemed to get to the same sort of sound.  There are also melodies that remind me a bit of Frank Zappa, although not nearly as jagged or angular.   What Zappa and JMC have in common is a classical background.  Nobody talked about crossover in 1970, but that might be a relevant concept for composers making music that seemed to bridge cultures or disciplines.  I’m reminded also of Mark Mothersbaugh, whose work is boldly post-modern in his playful use of sounds and textures.  Mothersbaugh, Zappa & JMC made music that was considered legitimate as serious or classical music, yet also had credibility in the pop music realm.

Many millennials grew up listening to JMC’s music for The Stationary Ark, a regular series on TVO.

You may recall that a few years ago I interviewed JMC when workshopping his opera Savitri and Sam with a libretto by Ken Gass.  I’m hopeful that the opera will eventually get a full production. What’s clear when I think of S & S, in context with Syrinx is simply that JMC manages to be accessible.  While I love Zappa he is guilty of some of the most effete artsy writing, admittedly full of wit & unpredictability.  JMC seems more secure, less anxious about the need to seem brilliant, and so more confident as he gives us music that is at times pleasant and tranquil.

The same secure melodic gift is there in his Stationary Ark music, as it is in the Tumblers CDs. Of course I should be careful to credit all three of the members of Syrinx, a tuneful and rhythmic treasure.

I want to quote directly from their press release:

1) One modest task of Tumblers from the Vault is to reinstate Syrinx to their place in the wider canon of groundbreaking music so their story can be appreciated beyond the limits of Canadian notoriety
2) Unlike so many turn of the ‘60s experiments fusing rock and pop music language with new technology, Syrinx was never excessive in expressing their vision of what electronic music could offer. Instead, they blended these sounds in a holistic way, allowing the acoustic and electronic textures to create one organic voice. They opted to foreground the lyrical and poetic content of their compositions rather than their innovative techniques.

This is such a Canadian story, don’t you find? If they were Americans or Brits, they’d be much more famous. And their self-effacing approach to composition is quintessentially Canadian.

Tumblers from the Vault can be obtained here.

This entry was posted in Music and musicology, Popular music & culture. Bookmark the permalink.

2 Responses to Syrinx: The way the future used to sound