Posted on September 8, 2013 by barczablog

I only found out who John Mills-Cockell was after the fact of encountering his music without knowing who he was.  A tune by Syrinx –“Tillicum”— was my first encounter with sounds that have been near & dear to my heart, a composition with an Eastern flavour showing the protean utility of electronic sounds.

Many especially in the Toronto area will recall the television series The Stationary Ark, with Gerald Durrell, for which JMC supplied engaging music.

JMC has been a pioneer of electronic music in Canada and around the world.  I read in his bio that he presented what’s called the first real-time music synthesizer performance in the 1960s with Buckminster Fuller.  JMC has been an explorer, teacher and pathfinder ever since.  His music is heard in film, TV, radio, and live theatre, with commissions to write original dance scores for the National Ballet, Royal Winnipeg Ballet & Toronto Dance Theatre, and he seems to have worked with most of the important directors in Canada, such as Brian Richmond, Peter Hinton, Ken Gass, Guy Sprung & Richard Rose.

Savitri and Sam is an opera JMC has been developing with a libretto by Ken Gass.  After their workshop back in 2008, Gass & JMC revised the work, and are now ready to put it back into workshop the week of September 23rd in Toronto.  That’s the occasion for me to ask John Mills-Cockell ten questions: five about himself, and five about the work on Savitri and Sam. 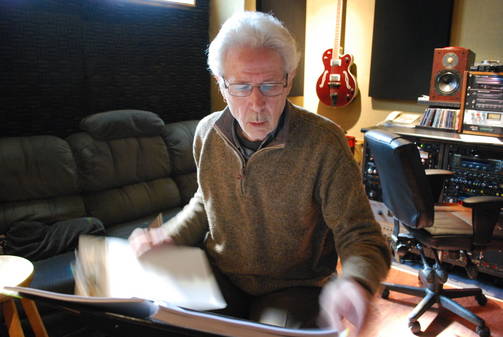 My mother, Emily, died when I was 6 months and because my father was poor and trying to establish a career for himself, devastated by the loss of his wife, I went into an orphanage for a couple years . Finally he married the young nurse who cared for me during that time, Cynthia.

My father was a violinist in a Palm Court type trio for several years before he had to concentrate on raising a family. He frequently played with friends who came to our house when I was a boy. I have 2 younger brothers and we all took music lessons, but for some reason I’m the one who carried the torch. However, Dad travelled a great deal. He was in fashion and spent much time in Europe, New York, Montréal to buy dress fabrics.

Am I more like my father or my mother? I don’t know, but obviously the fact that he was a musician and that music was always part of our daily lives was seminal.

I joined a church choir when I was 5 and learned to read music. This probably would not have happened without him. He was a regular in the choir. Cynthia attended church only occasionally.

2- What is the best thing or worst thing about being a composer?

Labels are certainly a trap. Even after all these years one feels hemmed in and limited by them. Interesting that you have picked this particular ‘worst thing’.

The best thing is clearly the incredible opportunity I have to express myself for others’ pleasure & interest. I love creating music in all contexts.

Of course I’m passionate about theatre, just as much as I am about music. Almost everything else I choose to spend time doing is directed towards feeding my desire to create music: concert music, and music in various multidisciplinary settings: theatre, film, dance, whatever; music in all forms and genres. It is a mistake to dismiss any possibilities for expression without at least having a crack at it. The only problem is that our time here is limited.

For the next 2 weeks I’m facing an ensemble of singers in the recording studio with only rudimentary skill in conducting, even though I have acted as musical director in a variety of contexts for most of my life! Even though I’m considered by some to be a pioneer in electronic technology used in music creation, every time I use my smartphone it’s an awkward battle

I walk my dog at home on Vancouver Island. Cook with my partner, Jean. Drink coffee.

1-How does scoring Savitri and Sam challenge you?

Although it is a large scale work incorporating various musical & theatrical traditions, I believe Savitri & Sam is not difficult aesthetically compared to some contemporary operatic works. The story, dramatically and deftly depicted by Ken Gass, is so compelling. The characters are both operatically theatrical and believable so that audiences will care about them and hopefully be swept away by their performances.

The work is comic as well as tragic, powerfully resonant for anyone concerned with human rights. It’s themes resonate universally, far beyond the multicultural backgrounds of the characters and the panoramic setting of northern British Columbia.

2- What do you love about composing music, particularly collaborating with Ken Gass?

I am incredibly fortunate that Ken agreed to work with me on the project. He has a much needed instinct, developed through years of play writing and directorial experience, for creating clearly delineated characters who can express complex human situations through a dramatic & meaningful narrative.

In Savitri & Sam we had an opportunity to create a libretto that combines realism with poetic imagery & expression. I think he has done so beautifully. It was an ongoing joy to set the text. Beyond that, Ken has indisputable experience producing many kinds of theatre with many performing artists & designers.

One of the reasons I wished to compose an opera, beyond this amazing and powerful story, was to have an incentive to imagine and set forth dramatically exciting music. Having a narrative like this one was my portal to discovery, forcing me to find fresh colours, melodies, & rhythms.

The poetic clarity of Ken’s text and the incisive quality of his characters inspired whatever I have been able to do with the score.

Of course it is a collaborative process. Inevitably there is a great deal of back and forth about pretty much every detail of the work, from story line, to timing, dynamics, every breath and sigh!

3-Is there a moment in the work that you’re especially eager to see or hear?

The climax of the piece, not to give away too much, is a powerful and violent scene set above the raging waters in the Fraser River Canyon at Hell’s Gate. This is the penultimate scene of the opera and Ken has created a marvellously dynamic spectacle of human passion bordering on the edge of madness. That said, every scene that leads up to this one and to the denouement that follows are hopefully just as gripping in their own way. They are certainly as necessary as the ‘big scene’.

4- How do you relate to the modern world of music as a 21st century man?

When I was a maverick electronic renegade & 12 tone composition student, everything seemed easy. We never though about being ‘modern’. It was simply what was happening, the zeitgeist.

Exciting: Karheinz Stockhausen’s talk on Max Neuhaus’ performance of Kontakt at U of T, Cage & Feldman at Knox-Albright, Zappa at Convocation Hall, later Einstein on the Beach, etc, etc. Now so much feels pretty conventional to me, but it takes great courage and imagination to break free in order to make something ‘new‘ that is ‘meaningful’ and inspiring to audiences. This must come not only from the artist (we must make opportunities as well as dream up works), but also from facilitators, individuals & organizations who lay the groundwork for exciting new art to occur.

5- is there a colleague or teacher you especially admire?

The colleagues, other artists mostly, who inspire me are way too numerous to mention. It would be just one or two whom I might think of right this minute. People in my past that had a direct influence on my personal development: Dr Samuel Dolin, my composition teacher, Myron Shaffer who got me into graduate electronic music studies with Gus Ciamaga, composer Ann Southam, composer Udo Kasemets, sculptor Michael Hayden, producer Felix Pappalardi. Only a few.

JMC:
The second workshop Ken & I are about to hold after many, many months of preparation, casting, calling favour, interruptions, is an important step in the development path of this work. We’re both excited about it and looking forward to what emerges. At the same time, in parallel, we have been working with record producer William Blakeney at Grant Ave Studio on a complete recording of the piece. Next week I’ll be in the studio with a very fine ensemble of singers to lay down the chorus parts on the instrumental tracks already recorded.

LB:
The workshop is to be held the week of September 23rd, with a public performance on Saturday Sept 28th.  Details (how to get tickets) TBA.

6 Responses to 10 Questions for John Mills-Cockell