I took advantage of the free fares on the TTC (celebrating the extension on Line 1) to ride downtown to Massey Hall for my first Tafelmusik Singalong Messiah in 20 years or more.

And it’s the last one for awhile as Massey Hall will be renovated, forcing Herr Handel (aka “HH”) and his minions to relocate to “Roy Rogers Hall.” Ah yes, he meant Roy Thomson Hall.

Every time HH spoke he had us in the palm of his hands, and that usually meant we were laughing at every little joke he made: and there were lots.  It’s tempting to let his words fill this review: which would make it more entertaining, but cheating on my part. 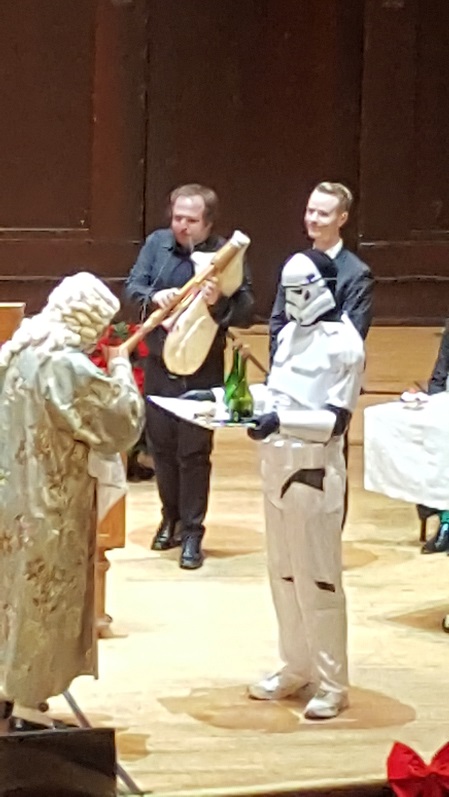 Serenaded by an Italian bagpipe that he might have emulated in his pastoral sinfonia, Herr Handel grabs a drink, while lamenting that “good help is so hard to find”.

If you know this music well enough to sing it, chances are that you not only like Handel’s music, but know all about this annual event. If you are resisting the temptation, you’re missing out on an enormous treat.  I say that as someone who had the singalong in the back of my mind for years, meaning to go someday, and finally going this year.

As a singer who stopped singing in his church choir last year, there’s no question. Like a thirsty traveler at an oasis swallowing his first drink in ages, as soon as we started, I said to myself “I needed that.”

This is a somewhat reduced Messiah.  Some of the most difficult numbers are missing (a merciful choice!):

While it’s in two parts rather than three, most of it is still there, especially the parts most people love best (“For Unto Us a Child is Born”, “All We Like Sheep”, or “Hallelujah” which we sang again at the end as our encore. Hm I guess we must have been good.).

We are inevitably a bit slower than the performances in Koerner Hall: because the entire auditorium of 2700 or so are doing their best following the conductor as he leads us, gets us to stand or sit, inspiring our laughter or applause.  We are watching four soloists and a virtuoso choir perform Messiah yet the chemistry is different because we’re participating. Before they begin the Sinfonia, HH warms us up with the first bars of “And the Glory of the Lord”: and then stops us when he’s satisfied.  He’s a funny combination of a larger than life portrayal and a conductor, because of course we’re watching conductor Ivars Taurins, bringing Handel to life in a portrayal that improves every year.  I hope I’ve done my part to help deepen his incarnation of the great composer, in asking a few questions a few days ago.  He seems to live it, whether in his focus during the numbers or when he stops and talks to us.  While I can share the witty lines, they don’t nearly give you the actual impression of someone bringing this music and its composer vividly to life.  This video gives you some idea, although this year’s incarnation of HH is looking much more authentic than this, walking with a cane and acting out more and more.

While we singalong it is still a performance.  HH leads the Tafelmusik Baroque Orchestra and Chamber Choir, the soloists: plus the many of us who are singing along. Some of us were seated with others of the same vocal type. 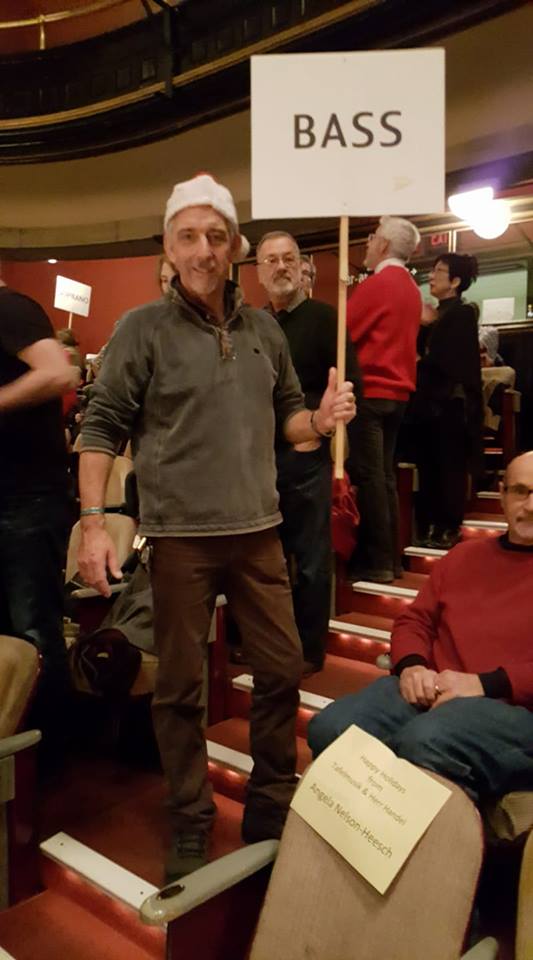 For those who wanted to be among the same vocal type, they helped us find our sections.

Some of us were in general seating.  I think it’s easier when you sing the tenor line among tenors.  I was in a section with a few basses and sopranos partly because I wasn’t sure if I was going to dare to sing as a tenor or sing bass. And yes as the only tenor in my section it meant, gulp, that at times I was venturing to sing my line without anyone nearby to confirm that I was doing it right.

Soloists? Rufus Müller employed his lovely and congenial tenor voice, stepping forward to sing “Comfort Ye; Ev’ry Valley” the recitative & aria that began the work before we sang “And the Glory of the Lord” in earnest.  Daniel Cabena showed us his agile countertenor and a gorgeous colour in ”Behold, a virgin shall conceive followed by “O thou that tellest good tidings to Zion” aided by the chorus as HH raises us abruptly.  Those moments were among the most exciting, even though nothing more profound than standing up was required.  Then it was Brett Polegato’s turn in the mysterious recitative “For behold, darkness shall cover the earth” followed by “The people that walked in darkness”.  While he’s soft and gentle this time, much later he will earn the biggest applause for a heroic “The Trumpet Shall Sound” (as well as Kris Kwapis, the flawless trumpet player). But first we need our little bit of Christmas Eve, via the angelic soprano of Joanne Lunn.  I’m not kidding about the angelic part, whether in her pristine coloratura, her fabulous diction, her perfect intonation, or her adorable presentation. I dissolved into tears watching her, admittedly a bit overcome by what we’d just sung in reply.  While the 2500 or so voices may be a scattershot approach in some of the more fast-paced passages, it’s a huge blast of adrenaline singing these passages.

I suppose the Singalong has changed over the years.  Excuse me if I speak of what I remember with some caution, as that previous one I attended was long ago, and I didn’t expect that I’d be trying to recollect it in 2017.  I think at one point there were choruses in the singalong that we watched, as I swear we watched Tafelmusik sing “And He Shall Purify”, that deadly red-hot chorus.  Or maybe I am remembering wrong, conflating the memories I have when 100% of the performance is from the stage and we in the audience are silent except for our applause.

But HH and his Singalong gets better every year.  And next year I look forward to hearing him at Roy Rogers Hall… 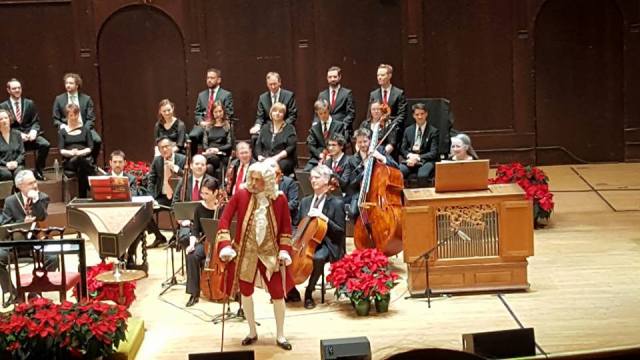 This entry was posted in Music and musicology, Personal ruminations & essays. Bookmark the permalink.