My visit to the eye doctor today reminds me that when all’s said and done I must look at the world through my own lens.

I was at the theatre tonight to see Mixie and the Halfbreeds by Julie Tamiko Manning and Adrienne Wong, directed by Jenna Rodgers.  For better or worse, my review must be through that lens.  I feel especially aware of my subjectivity, the limits of my own perspective.

I’m reminded of my time studying drama, doing shows with students.  The energy of a young cast is such a vital beautiful thing.  I’m older now, and so it’s especially poignant to take in the youth of this cast, in such a small space at Scotiabank Studio Theatre at the Pia Bouman School. 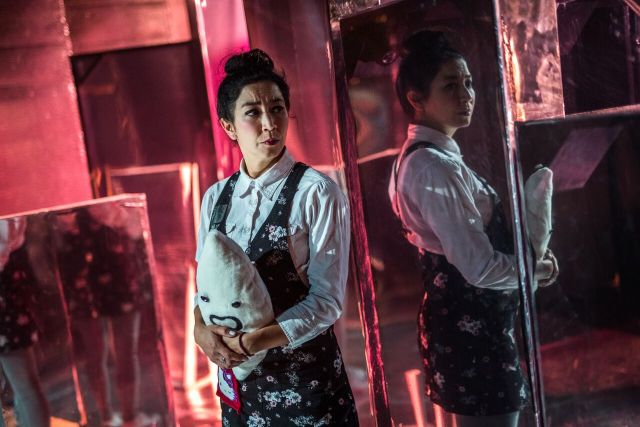 I’m reminded of the proposal process, the ambitions of play-creation, as I work on a proposal of my own (another lens).  I can’t help wondering about Mixie’s creators and what they expected coming into the project. What were their ambitions and expectations?  I see some wonderful things, some beautiful moments, some satire & comedy. And as I sat there –a person of mixed heritage from Eastern Europe rather than China or Japan or the Philippines (among the places mentioned in tonight’s show)—I didn’t always understand, even as  I noticed others in the theatre, of a different ethnicity, laughing at times when I was staring blankly. “My lens” means I got only some jokes, only understood some of  the moments pointing a critical eye, that didn’t fully read from where I sat.  Some of that may be due to coding, language that is understood differently if you’re of a particular ethnic group, or indeed gender, in a show played entirely by females.

Mixie is ambitious, and I like that.  We’re in the presence of a discourse mixing media, with words, music, dance, and lots of blonde wigs.  I think I understand what the wigs signify, although they read differently depending on who you are, in other words, what lens you look through.  I think the energy of this show could fill a huge stage, reaching the deepest recesses among thousands of spectators, but there we were in a tiny space.

I read what Julie Tamiko Manning said in an interview.

“In Canadian theatre, shows are written, produced and then they’re done. To be able to revisit and rewrite as an artist who has grown in the last 10 years was a really wonderful opportunity.”

I understand it was shorter last time, and I suspect at that time it was tight, where this time, by enlarging it, they may have weakened it in the process.  This past week I saw The Overcoat: a musical tailoring, also a piece from years ago that has been revised and revisited, one of the best things I’ve seen all year. As I look to revisit an old piece of my own, to make it better next time, I see the risks in re-creating something.

I went to the library last week to get John Ralson Saul’s A Fair Country, a book Peter Hinton cited when I interviewed him last year for Lous Riel. I wanted to unpack Saul’s observation that we are a Métis nation.  We are rarely that British country of good government that is sometimes spoken of in school, except for the occasional misstep, such as 1885.  More often we are a country who are surprisingly ready to inter-marry, a Métis country.  And so I wondered, as a Hungarian-Canadian, recalling from my reading the way Canada welcomed Hungarians into this country via Jack Pickersgill (ensuring my mom’s lifelong loyalty to the Liberals), and more recently have welcomed refugees from Syria.  We are not a melting pot –admit it, you knew I was going to invoke this cultural cliché—but more of a mosaic, and indeed neither metaphor is really adequate to account for Saul’s idea. But maybe Canada is a place we are still figuring out, discovering through books like the one by Saul, or by plays such as Mixie.

When Zoé Doyle as Mixie and Vanessa Trenton as Trixie –the two leads—were trading lines back and forth, the dialogue was always interesting, sometimes quite brilliant.  In the last five minutes it was especially good, when they lowered the energy level to speak with great sincerity & commitment, giving us something less like a satirical sketch on SNL.  I would like to hear the whole thing again, but delivered more softly, as I think the dialogue is full of poetry and wit, occasionally very powerful.  There’s a fair bit of dance throughout that’s quite impressive, and at times stunningly beautiful, although other than the pointed satire of these dark-haired women of different ethnicities in blonde wigs, the dance was an explosion of energy that did not often seem to connect for me with the rest of the play.  It was as though there were two separate shows going on, which can be wonderful, but they only intersected occasionally.

Mixie and the Halfbreeds continues until April 15th.

This entry was posted in Dance, theatre & musicals, Politics, Reviews. Bookmark the permalink.