A closer look at Hadrian

Today was the closing performance of Hadrian, the new opera by Rufus Wainwright and Daniel MacIvor, presented by the Canadian Opera Company at the Four Seasons Centre.
After tonight’s display of healthy nearly-naked male bodies in a homosexual love story, tomorrow I’m off to see Opera Atelier’s display of nearly-naked bodies of both genders in their pair of love stories. 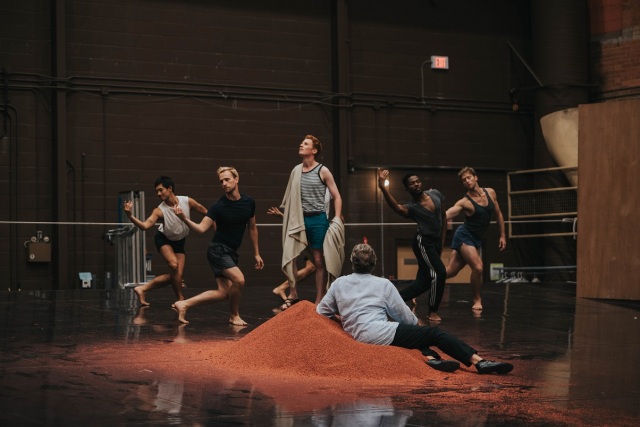 Tonight was my second trip through Wainwright’s score, a closer look because I was sitting in the second row. This vantage point is a mixed blessing. One can’t easily see the surtitles (not necessary in Hadrian which is mostly in English), at times the orchestra can be so over-powering as to drown out soloists, and if you want to be taken in by the illusion, you can often see how the magic is accomplished from these seats.

But at this distance one is more susceptible to a good performance, unable to resist the magic. I was again captivated by Ambur Braid’s acting, subtle nuances I couldn’t see from afar. Thomas Hampson was even more persuasive. Karita Mattila enacted a version of a singer’s nightmare; imagine you’re in a foreign country, your words sung in the language of the audience complete with surtitles of what you’re supposed to be singing (oh terror!).

I was very impressed with a lot of the singing, even if I’m not 100% confident that I’m identifying the parts correctly. Anna-Sophie Neher as Lavia (if I’ve identified the right role & person) was wonderful in her singing, and often the most interesting person to watch onstage, in a somewhat thankless role, always making something happen. Ditto for Ben Heppner as Dinarchus, who is such an honest singer, never taking a short-cut but giving his all. David Leigh as the aptly named Turbo was even better up close, the voice strong, the intonation perfect, and his macho presence always a force to be reckoned with.  Alas with a new opera, one may not be as clear as to what is being accomplished by the singers who I want to appreciate for their strong work throughout, even if I’m not mentioning them all by name.

I can’t tell if Isaiah Bell was over-parted in the role of Antinous or it was simply the location of my seat, within a few feet of the conductor. Was the role cast based on visuals and the chemistry between the principals? Bell looks the part, but perhaps Wainwright didn’t expect that he’d written for a heavier voice, perhaps requiring a heavier body as well to cope with the heavy orchestration.

Speaking of Antinous, it’s something I noticed on opening night and ignored, but mention now on closing night. There were at least three people in the cast who pronounced “Antinous” as a four-syllable name, while the chorus and most everyone else made it a three-syllable name. There is presumably a right way to pronounce it, and whatever that is should be decided upon by someone in the production, and then it must be adhered to as a guiding principle by all.

Up close I liked most of the opera much better. But the last five minutes still had me squirming, astonished that they would let it reach the stage. I am frankly astonished that so much of the opera is good, and then it ends on such a weak over-blown sequence. I wondered if it was maybe politics, especially on a day like today, when the frequent references to “The Jews” gave me the shivers, in consideration of the unfolding news story from Pittsburgh. Was the ending left in this bizarre shape due to politics, some kind of pressure or interference? I can’t help thinking maybe that’s what happened, although it’s funny that the whole gay eroticism of the piece –which is so much stronger up close—still hit me as wonderful, beautiful, perhaps the best thing about the production. Choreographer Denise Clarke created something quite wonderful for her dancers.  I’m very happy to live in a city so relaxed about eroticism in opera that this is almost an after-thought.

After a second hearing, part of me wonders if the key was simply knowing how to listen. I think it’s mostly operatic especially now that the cast seems so much more confident in the material, so much more familiar with the music & the text. No question, they were better today than they were two weeks ago. The highlights this time were very much the same as last time, namely

I am curious to see what they make of this opera. I hope the weakness at the end is truly the result of politics and not the actual intention of Wainwright and/or MacIvor. (I could be wrong of course!)

At the same time, I am very conflicted about the music. While sometimes RW showed a melodic gift, we often encountered scenes where one or more personages onstage sang the same note over and over, so much so that the repeated note could almost be a leit-motiv. But what might it signify? For someone reputed to have a melodic gift it was odd that so often the melody was in the orchestra while the singer was pinned to the same note over and over.

I will be interested to see what he writes for his next opera. In the meantime, Opera Atelier continue Actéon and Pygmalion until next weekend, and the COC continues Eugene Onegin, also running until next weekend.

1 Response to A closer look at Hadrian