This is not a review.

I had the exquisite pleasure of going to Lula Lounge tonight for Verbotenlieder, Tongue in Cheek Productions’s latest extravaganza.

The premise as I understood it from my recent interview with TiC co-founders Aaron Durand & Michael Nyby is an extension from what they did in their 24-man Winterreise. On that occasion earlier this autumn, TiC did something transgressive; instead of a song-cycle interpreted by one man in a concert setting, they assigned each song to a different person, and in a bar with food being served. 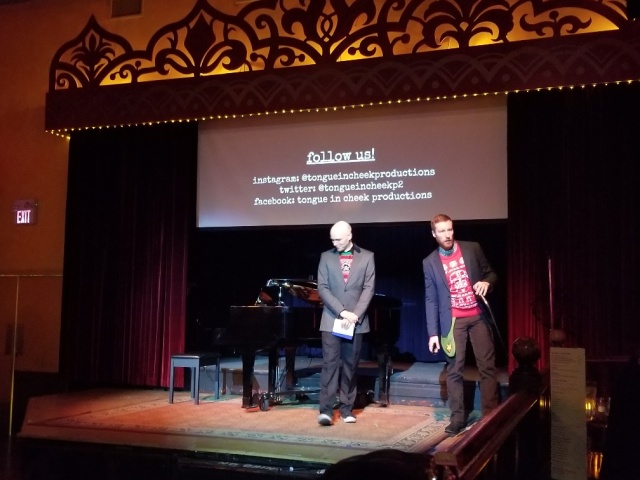 They took it further this time. Instead of 24 baritones, you had a group of women, and the transgressions were of the gendered sort, women singing rep that is usually sung by men.  Oh and they said something I haven’t heard previously, encouraging us to use our phones throughout, to share it through social media.  For me that’s a first although I chose to leave my phone aside while singers were singing.

And I think (as I continue to wrestle with a question my wife posed earlier tonight) I know the answer. Why is this event called “Verbotenlieder”?

…which I translate as “forbidden songs”.

Was anything really forbidden? Or is it perhaps a tendency in classical music for people to get up in arms about, pardon me, nothing at all? I think the name was a tease and a provocation, another German compound word like Winterreise telling you that this is meant for a special nerdy audience, a silly thing to have fun while we all get drunk listening to one another.

What would usually be a kind of box-office suicide worked like a charm.  The place was jammed, the audience louder by far than last time: possibly because a big chunk was comprised of Winterreise veterans.

No you don’t mention Fight Club: but perhaps something similar is at work.

This was not for your usual audience. The whole thing was a series of in-jokes.

Now of course I know some people who probably wouldn’t have approached such an evening the way I did. Pardon me if I decided to have fun. I was at the Messiah last night (fun), and watched a grand-child’s school pageant this afternoon (also fun). Does one show up with stipulations, insisting that this person’s fach is wrong for what they’re trying to sing, or that a woman shouldn’t sing a particular aria or song?

Perhaps: but if you worry that the fach is wrong for the singer
YOU MISSED THE POINT

If you quibble or have stipulations
YOU MISSED THE POINT

if you didn’t let yourself eat drink and be merry?
(okay I understand some mustn’t drink… I never do when I have to drive).

The show I saw tonight was therapy. There isn’t enough work for all the talented singers in this town, or indeed in any town out there. What we saw tonight was a colossal finger jabbed in the direction of those who make the rules, of those who are uncomfortable with experimentation.

They’re called “Tongue in Cheek” for a reason. That being said, there were plenty of serious moments. I did actually shed a tear watching “kuda kuda” sung by Natalya Gennadi, beautifully sung and acted. I laughed loudest at Beste Kalender’s brilliant re-imagining of “Erlkönig” (a drinking game! Divide the audience in three, based on the three characters in the song, and take a sip whenever you hear yours –Vater, Kind oder Erlkönig—mentioned). Did I say I was sober? Tonight fortunately Erika was along so I didn’t need to drive.

Although come to think of it, Brittany Cann gave Kalender a run for her money (as funniest), in her brilliantly inebriated finale to the Ravel cycle “Don Quichotte à Dulcinée”.

It was a team effort, including Elina Kelebeev and Natasha Fransblow, pianists, stage direction by Anna Theodosakis, and several creative (hilarious) departures from the original text.   Here’s a link to the page where you can see it all listed, all the names of repertoire and the singers & musicians.

It was a funny night, to be upside down inside the rep. I’ve played so much of this music (for instance, I recall my brother singing the aforementioned Ravel cycle), sung some of it too: often knowing full well that internal sense of the forbidden, picturing the scolding fingers, the wrinkled noses. No I shouldn’t sing Wagner or Verdi. Do I embrace transgression? I sang the Four Last Songs at a recital and just to be really nerdy and weird, I played the accompaniment too, knowing full well that I was not supposed to do it (celebrating the 50th anniversary of the composer’s death: but it was fun).

And what I couldn’t miss was the sight of the supportive artists screaming for one another, eating it up and standing in solidarity, for everyone’s right to break the rules. 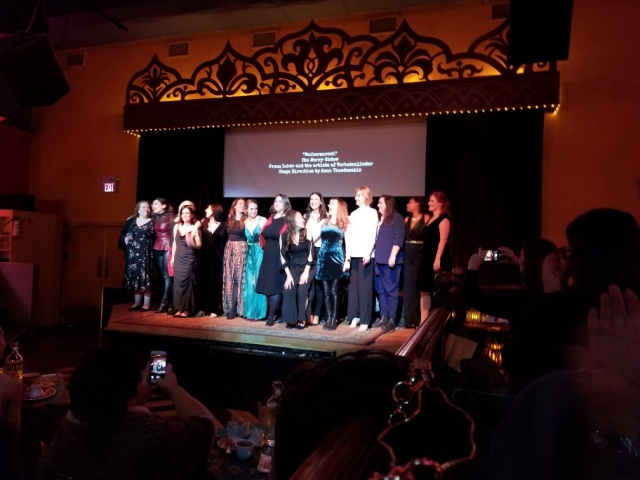 Everyone on stage for a final bow.

There may also have been some practical purpose too, when I saw some of those in attendance, enjoying the great singing but also nodding, making a note for future shows: where they might engage one of these brilliant women.  It was a showcase of vocal & dramatic talent.

To have singers boldly go where they weren’t supposed to go, a bit like Captain Kirk..?  Like I said, it felt like therapy.  While this one may be hard to top, I think Aaron & Michael may be on to something. I’ll be intrigued to see what TiC do next.