Toronto is Messiah town, as I’ve joked before. Handel’s most popular Biblical oratorio is everywhere at this time of year.

Tonight I took in the second of six offered this week by the Toronto Symphony, the Toronto Mendelssohn Choir and soloists under the baton of Johannes Debus, the Music Director of the Canadian Opera Company. We’ve heard him lead operas at Four Seasons Centre, I wondered what he’d be like leading an oratorio down the street with the TSO & TMC.

And in fact it was the cleanest clearest Messiah I’ve heard at Roy Thomson Hall.

Part of the credit must go to the deployment of this small orchestral ensemble on the stage. As you can see from my photo, there are all sorts of bare surfaces to reflect the sound, both floor and walls. 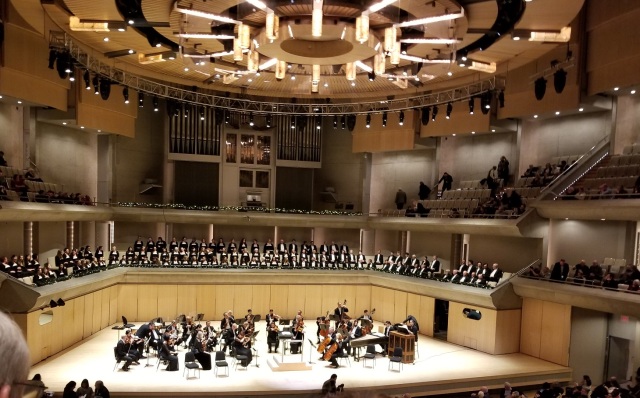 That’s a big deal when you compare this performance in a space seating 2600 to what we might get at Koerner Hall, and its 1300 seat capacity. To put it bluntly, as I sat there with my friend Russ, I asked him to imagine the same energy that he and I must share in the big hall, vs the same energy given to just one person instead, as it would be in the smaller space. I’ve been to other Messiahs in this hall where the best moments were the bombastic attempts to raise the roof, but where anything subtle seemed to be asking too much.

Ah but Debus and his team at the TMC (David Fallis & Ezra Burke) accomplished a miracle.  Attacks and enunciation were crisp, but the big difference was in dynamics. We often heard choruses sung mostly at moderate dynamics rather than loudly, including that one we always listen to standing up, namely The Hallelujah Chorus. And Praise the Lord, it was a moment of great beauty as it gradually built to the final big chords.

Most of the choruses offered a similar display of intelligence & artistry, whether it was Debus  or the TMC preparation by Fallis and/or Burke. My favourite chorus is “Lift Up Your Heads”, a wonderful bit of dramatic dialogue between sections, that builds inexorably to the end. I was thrilled to hear such a lucid exchange of phrases between sections.

Debus carefully reined back the orchestra who rarely ventured past mezzo-forte all night.  Our ears were given a rest, able to hear the gentlest phrasing of a soloist. Everyone had their moments.

Claire de Sévigné was lovely in the Christmas Eve segment of the angels’ appearance; her smile was the cherry on top.

Tyler Duncan uttered the words “Behold I tell you a mystery”, and as he went up for the word that ends the sentence, his voice was unexpectedly delicate, a wonderful enactment of what he was describing.

Andrew Haji alas was competing in my section with someone who took “comfort ye” literally and thought it meant “tear open your packages of food”. Why Lord why? But Haji was a marvel in a brisk reading of “thou shalt break them”, the orchestra seeming to laugh sardonically in accompaniment.

The TSO and TMC under Johannes Debus continue their brilliant take on Handel’s Messiah at Roy Thomson Hall Wednesday, (Thursday off) Friday, Saturday & concluding with a Sunday matinee.