Is it really five years ago? Time flies. In January 2014 Atom Egoyan’s production of Mozart’s Cosi fan tutte had its premiere with the Canadian Opera Company.  I looked back at what I wrote and –after having seen the revival of the production tonight – I wonder. Did I get it wrong? I wrote a lot of very serious language, about the Frida Kahlo painting that at times dominates the stage picture, and about the politics of the production. If the 2019 version of myself could talk to the guy from five years ago I’d tell my younger self to lighten up.

Watching it tonight I laughed a lot. Now let me be clear, Mozart’s comedy is among his darkest works even without Egoyan’s reading, which simply lays the subtext bare. There’s no distortion of what’s in the score.

What I can’t decide is whether tonight’s cast has made this more fun, or if I was simply a pretentious bore in 2014, who missed all the fun that was there 5 years ago.

There’s a great deal of beautiful music in this opera. The COC orchestra sound splendid under conductor Bernard Labadie, tight & clean throughout. A couple of times he left singers in his wake, something I recall when he conducted a COC Magic Flute.  Things did move along swiftly.

There are six soloists in this jewel of an opera, and there’s nowhere to hide. Everyone has their moment, although there’s also a great deal of ensemble singing, while a story must be told in Egoyan’s modern take on da Ponte’s cautionary tale of love & romance. Subtitled “The school for lovers” by the librettist, the romance is a lesson on love. It’s not precisely Hook Up. 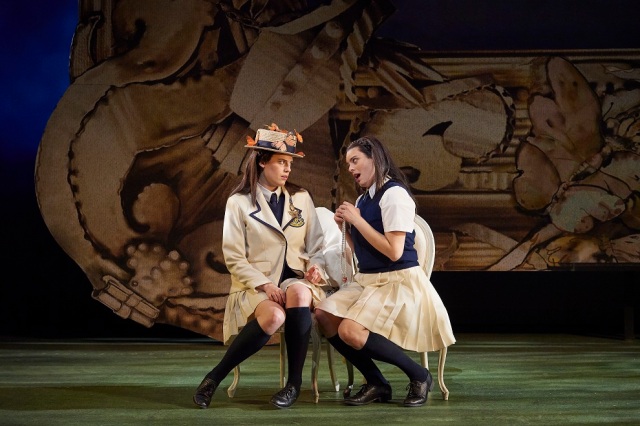 In spite of the serious images of bleeding hearts via Frida Kahlo’s The Two Fridas (1939) Egoyan and Associate Director Marilyn Gronsdal have turned the performers loose to be really funny, especially the women: Emily D’Angelo (Dorabella), Kirsten MacKinnon (Fiordiligi) and Tracy Dahl (Despina). Or maybe it’s just that last time they seemed to be the focus of meaning, and appear to be free this time to be much more playful.

The chorus too seemed to be involved in a much more enjoyable exercise (they’re much busier than you would expect from looking at the score!), alongside Russell Braun, their teacher in the “School.” Ah yes I wonder if he’s the key this time? Last time Sir Thomas Allen may have lent the whole thing a gravitas that took it to another place entirely from what Egoyan or da Ponte may have wanted. Braun seemed a whole lot more fun. Does that sound crazy, to be knocking Sir Thomas Allen? But I only know that it felt way more pompous last time, more light-hearted this time.

Which isn’t to say that the ending is happy. No, I think we’re very much in tune with the text, but this time it felt genuine and connected to what went before. In 2014 I saw it twice and it just felt long and ponderous. This time –perhaps with credit to Labadie’s pace—it moves more like a comedy, dark though the ending might be.

Where last time Tracy Dahl (the sole hold-over from 2014) was the occasion for the first smile to cross my face when she appeared, and the star of that show, this time it was different, as Braun and the two sisters gave us some laughs too. MacKinnon sang beautifully. D’Angelo is an exciting performer with genuine star quality, that she’ll bring to Rosina next season. Ben Bliss (Ferrando) and Johannes Kammler (Guglielmo) were also quite lovely to listen to, although their roles in the comedy are less pointed in Egoyan’s interpretation.