There are nights when the theatre reminds you how lucky you are. You may think that I say this too often, but I don’t believe we say it often enough, especially the entitled white upper class twits I think of as my peers.

Tonight I saw the opening of Unsafe. It’s a funny hybrid of a show, with a writing credit for Sook-Yin Lee, who is one of the two people onstage for almost two hours without intermission.

Zack Russell is credited as “Consultant” although to hear them tell it in the performance, he was writing a play.

Unsafe is several things. It’s like a debate between two people arguing about what they’re doing, while they’re doing it. S-YL may have credentials as an artist in film & music, but presents herself as a truth-telling documentarist, an interviewer seeking truth. She debates with ZR –who is portrayed by Christo Graham—who we’re told is a musician & playwright fulfilling a commission for Matthew Jocelyn, the former Artistic Director of Canadian Stage.

So did you get that? The man is trying to make this a play while the woman is seeking to make this more of a documentary – interview, and the whole time they’re debating how to do it? they are really doing it.  So we’re often discussing & analyzing the process as much as we’re having a discussion: which I found mind-boggling, hair-raising and yes, really cool.  How you frame a question is vital when you’re studying something like this, so that meta-position is brilliantly apt. And in passing Canadian Stage expose themselves to a scathing critique as a very white organization; and they faced the questions bravely.

Unsafe is a show that plays very differently depending on which stratum you occupy economically, culturally.  How safe or unsafe should one feel, I wonder?

The subject is censorship. Jocelyn’s original focus in his commission was upon artist Eli Langer, whose 1993 show at Mercer Union became the centre of a huge controversy.

Excuse this big huge digression, but I want to give you some context. Here’s what Mercer Union’s website says :

And I wonder, as I put this link in: will I be allowed to do this or will someone contact me and tell me to take it down?

MEDIA RELEASE, DECEMBER 1993
On December 16, 1993, five paintings and thirty-five drawings were removed from an exhibition of works by Eli Langer at Mercer Union by the Morality Bureau of the Metropolitan Toronto Police.
Mercer Union understands the origin of the work by Eli Langer to be imaginative, and to be in no way a measure of the acceptability of any implied activity in these works of art. We consider this work to be a serious exploration of the human psyche. Many contemporary artists have investigated sensitive issues, and we see Langer contributing to such discussions. In exhibiting these works Mercer Union neither intended to act unlawfully nor was aware that the exhibition was in breach of any law. Mercer Union’s Board of Directors would like to reiterate their support of the artistic merit of the work of Eli Langer. At this point, no charges have been laid.
The three paintings and fifteen drawings that remain in Eli Langer’s exhibition will be on view until December 22. Mercer Union is open Tuesday through Saturday, 11 a.m. to 6 p.m.
[…and there’s lots more on that webpage]

Kate Taylor’s response in her Globe & Mail review appears to have been a catalyst for the firestorm that erupted.  And Mercer Union have that review prominently on the same webpage I just sent you to.  Tonight we heard from Kate Taylor in this show, one of several case studies explored over the course of the evening. 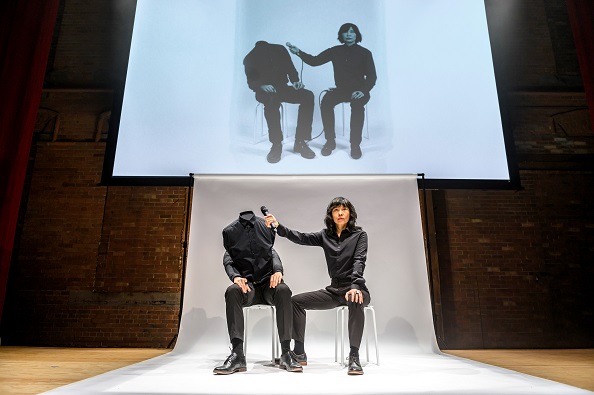 The original poster for the show (above) gets reproduced, Christo Graham becoming headless for Sook-Yin Lee to interview for us onstage (photo: Dahlia Katz)

Yuula Benivolski’s photo that has been used to publicize the show was reproduced for us parodically by Christo Graham wearing a mannequin on his upper body, a hilarious effect initially that grew creepier the longer we watched, a kind of enactment of the loss of control implicit in censorship.

I’m simultaneously frustrated and grateful. I wish it had been longer in places, unpacking more of what was hinted at; and yet it was quite long & exhausting, not just for the performers but for us too. It was like the third act of a Shaw play going on for more than an hour. In fairness there was tons of fun interspersed. We had some music, including Jeremy Dutcher & a smattering of Claude Vivier believe it or not. We had some moments when we flirted with the whole question of pornography in the most playful way.

I found myself thinking about the whole question of safety. There were moments when some in the audience seemed to feel unsafe, or so I heard in the talk-back afterwards. In the end it’s a play that seems to be entirely off-the-cuff, a live interview: or a very good simulation thereof.  There is so much more to this than what I can capture here, writing my quick response before bedtime.

It’s an impressive piece of work. I suspect dramaturg Birgit Schreyer-Duarte played a big part in organizing this meta-conversation, although I should also credit director Sarah Garton Stanley.  When something feels this spontaneous & real? that’s no accident. They made it look easy.

I feel very fortunate to have seen this, lucky to be here. Anyone who makes art or performs should see this, anyone who cares about freedom of expression should come listen to the debating, a piece asking questions about the new frontier, and the ways in which power interferes with expression.