The Toronto Operetta Theatre opened their new production of Johann Strauss Jr’s The Gypsy Baron tonight at the Jane Mallett Theatre with a full house in attendance for the first of five performances.

It’s a very uneven production of a work that is very elusive to present in 2019. The subtleties may simply be beyond us given how coded this was for its 19th century audience.

I bring all this up merely to suggest what an ambitious effort, what a tall order it is for TOT to offer this piece, requiring singing & dancing of its soloists & chorus in multiple ethnicities. I believe they’ll get better. Opening night the musical side was excellent, while the diction was uneven, at times very hard to understand. Cast members need to work at their enunciation if this isn’t to be a struggle for the audience (i heard “I couldn’t understand them” from someone in the lobby as I was leaving). Or perhaps subtitles need to be used.

The women are better than the men. I won’t name names except to suggest that when your text requires you to hurl the same expletive repeatedly, don’t make us cringe every time you repeat it.  Find a way to make it sound different or interesting, or beg the director to change it.

We’ve seen a lot of serious roles from Meghan Lindsay on the Opera Atelier stage, showing off her wonderful voice but rarely hinting at her ability to play comedy: which we glimpsed tonight. Beste Kalender was her co-conspirator (playing her mom), with a genuine knack for comedy. And the two of them sound lovely and stylish in this score.

Daniela Agostino comes into her own, indeed the whole show gets better in the second half when we get past all the details of exposition and we can get down to singing, dancing and having some fun. Karen Bojti is wonderful, with her lovely voice and natural comic flair.

Michael Barrett too improved as the evening went on, a solid job vocally and likable in the title role, with all eyes on him. When it was just him & Lindsay, or with Kalender everything worked beautifully.

The crowd scenes can be exciting musically but are still not quite where they need to be, without any of the subtleties the piece demands.

Derek Bate led the TOT orchestra in a solidly idiomatic reading of the score, including many recognizable waltz tunes.

The Gypsy Baron continues until January 5th at the Jane Mallett Theatre. 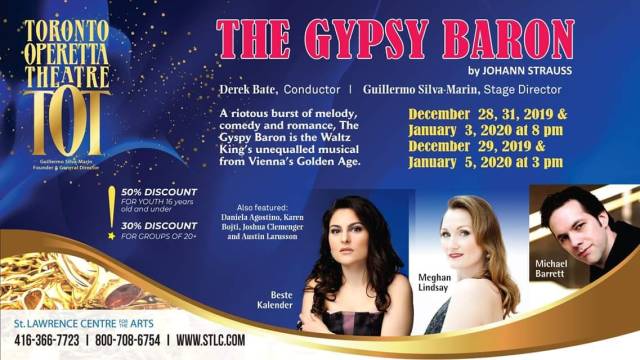