I heard a wonderful interview with Vivek Shraya on Q earlier today that gave me some  clues as to what I’d be seeing and hearing tonight in her one-woman autobiographical show How to Fail as a Popstar, aka #popstarplay in the realm of the tweet.

In the first moments of the interview we hear a song called “Music Ur the 1”, co-written by Shraya and James Bunton.

It’s the first of many moments of insight.  Without knowing the particulars I knew that Shraya has acquired a great deal of wisdom in her journey.

When I heard this little sample on Q, I was reminded of people I know who might have talent but who have lost their way. Music has become work because they no longer sing or play as though they love the music. Whether you’re singing a pop song or Pagliacci that sense of love is indispensable. 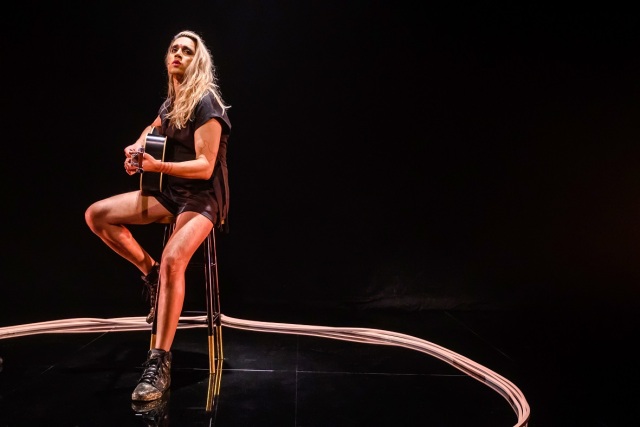 Vivek Shraya’s How to Fail as a Popstar (photo: Dahlia Katz)

It’s funny to be back at the Berkeley St Theatre where I’d been just last night for AF, seeing another show from Canadian Stage that was like a complementary opposite. Where AF is all physicality & rhythmic verve in the now, Shraya’s show is one person’s retrospective. The story-telling & singing take us on the most vulnerable exploration of a sensibility while leading us on a kind of magical mystery tour through recent cultural history.  It all seems so effortless & fluid that I want to give all the credit to Shraya although director Brendan Healy must surely have had a hand in it.  The time flies by on the wings of song, with lots of explosive laughter along the way.

The way Shraya described it beforehand is a clue as to what you get.

“This is my story growing up in Edmonton as a brown, queer kid and being obsessed with Much Music and wanting to make it as a pop star,” says Vivek Shraya. “The joke I’ve made is that it’s kind of like ‘A Star Isn’t Born.’ That’s what this story is. I was also watching a lot of music biography movies and most of them follow a similar narrative.”

You might never have expected it to go where it went, given that we were listening to Shraya sing bhajans, a kind of devotional song from India: and sing them very beautifully. I was reminded of Leontyne Price & Whitney Houston, two of my favorite singers. Both of them found their true voice in church glorifying God. It may sound obvious but if you sing to please God you can’t go wrong. You may never sound as good as Leontyne or Whitney but at least you will be making a positive sound.

In the interview Shraya worried that the title might sound negative. But if anything the piece might be a bit too positive, upbeat & joyful & fun throughout. How could that be bad? I worry that Shraya might be letting us –mainstream white culture—off too easily, leaving aside the more complex questions of gender, choosing instead to focus on suburban life & our love of popular music, and yes it is a genuine love-in (if you’ll indulge me for using a word that’s half a century old & that’s fallen into disuse). Where AF at times seems to express a kind of visceral rage, touching a nerve what with my guilty white conscience, Shraya lets us off the hook. While we hear of the occasional jerk calling him “faggot” in school, our experience is mostly a happy one, propelled along on a series of wonderful songs and blissful memories of a sweetly supportive family.

Shraya is an amazing singer, whether in the realm of the religious bhajans of childhood, or the wonderful array of songs we hear through the show. There are thirty credits listed for this 80 minute show. Some are tiny, such as the little bit of “Jump” we get, some are much longer. Don’t let the title of the show fool you. Shraya did not fail as a popstar for lack of ability.

There’s merchandise in the lobby including a couple of recordings & a book or two. I’m a sucker for this kind of thing. When I’ve seen a show and I don’t want it to end, I can’t resist the opportunity to prolong the magic at home.

What we brought home

The time flew by, the show was over before we knew it. Even so it’s still there upstairs at Berkeley St Theatre until March 1st.

Vivek Shraya’s How to Fail as a Popstar (photo: Dahlia Katz)