Alison Mackay has a knack for making intriguing connections. Every now and then Tafelmusik Baroque Orchestra turn to their former bass player to curate a concert, and tonight she may have done her best yet with The Indigo Project at the Jeanne Lamon Hall in Trinity-St Paul’s Centre.

It felt a bit like a cross between a TED Talk and a concert, the subject—fabric dye—being her pretense for an unlikely moment of intercultural magic. The part that’s like a lecture concerned the history of indigo, a dye that furnished a pathway to talk about life in different places & centuries, while listening to musics from different places & centuries.
I’ve never found the juxtaposition of western & eastern so stimulating, as it seemed that at first we were going back and forth in the narration, but gradually finding a kind of middle ground where both could be present at the same time, where there was a genuine merging.

You’d have to hear it to understand what I mean, but it’s truly remarkable. There are three more concerts this weekend (Friday & Saturday night plus Sunday afternoon) at Trinity St Paul’s plus another on Tuesday March 3rd at the George Weston Recital Hall in Meridian Arts Centre. 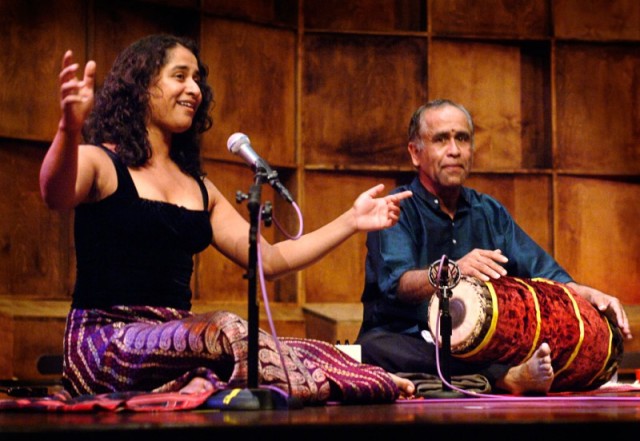 Smithers added an additional dimension that I didn’t see credited in the program, namely as a dancer. There is a great deal of passionate energy in all these words (not just the lecture but also the texts of the songs), that finally cries out for the physical release of dance, and gets it in the final number of the program.

I hope Tafelmusik will consider doing such a thing again.

If I have one quibble –and it’s a tiny one—it’s that I wish the lights had been on to permit me to follow along with the text of the singing. Yet I was swept along in several places where I have no idea what they were singing.

The great thing about this concert is how it seems to expand the possibilities, knocking down walls of expectation.  What will they do next time?  I’m looking forward to finding out what Mackay might program next.