The Toronto Symphony concert performance of Thaïs, recently released on Chandos, has me wishing we could see & hear more from Jules Massenet, the opera’s composer.  I begin to understand why the late Stuart Hamilton in his time with Opera in Concert produced a dozen operas by Massenet for Toronto audiences: including this one by the way. He would have said that Massenet is under-rated, his operas deserving to be heard & staged more often. 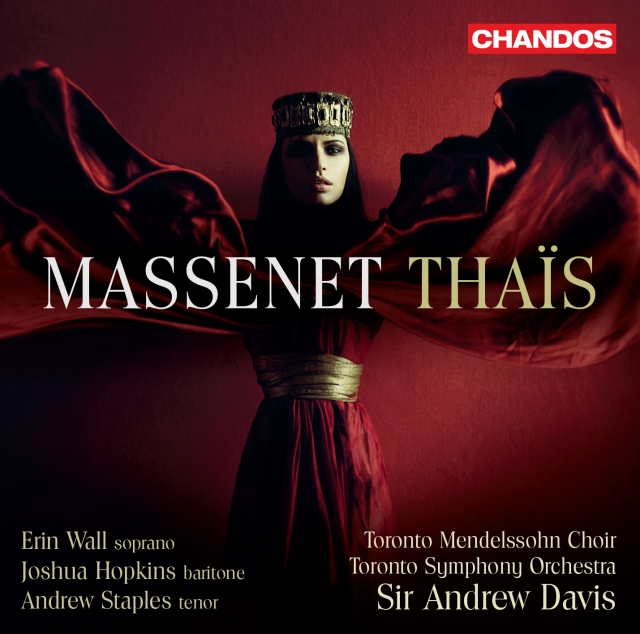 There are elements to the story that may remind you of other operas. A man seeks to resist the temptations of the flesh. A woman embodies those temptations. Onstage or in the score we encounter communities embodying diametrically opposite approaches to life & to pleasure. Unlike Tannhaüser or Salome, there is a great deal more ambiguity to the text, some balance to this opera that doesn’t demand that you take sides or change your beliefs.

I’ve been having a great time exploring this opera from two sides:

This is a pleasure I discovered in grad school, when teachers wanted a comparison between operatic adaptations and the original. Sometimes the source is so similar as to be mistaken for a libretto, as we see with Pelléas et Mélisande. Maeterlinck was not amused that he was identified as a librettist.  Sometimes the divergence is significant, the tone altered, variances among characters & in the way the piece is assembled as we see in Merimée’s Carmen.

I mention this because I stumbled upon a complete version of Anatole France’s novel Thaïs online in an English translation that you can download here.   It’s wonderful to read it while listening to the TSO recording of Massenet’s opera.

When you turn a novel into an opera, inevitably you have to omit some of it. There’s no way to include everything in the two or three hours onstage. And so when one of the characters engages in lengthy philosophical discussions somehow you have to capture that essence instantaneously.  Nobody wants to hear all that philosophy onstage.  It’s one of the qualities of opera that anticipates film, the necessity for economy. We see it for instance in Verdi’s Otello, when he skips a big part of Shakespeare’s original play, grabbing us from the first nasty note of the storm.

There was no way Massenet & Gallet could capture the subtleties of France’s novel. The enormous exposition that tells us who Thaïs was before she became a courtesan & an actress –including her baptism—is missing from the opera. Does it matter? I’m not sure. I think it would make the opera far more interesting, far deeper, if they had somehow managed to get this into the story, that the eventual Saint Thaïs of Egypt was baptized, at a time when Christians were secretive, hiding from persecution. The opera instead keeps its focus on her as an object of obsession, both in her community & in the eyes of Athanaël, the monk who would save her. Given that choice perhaps her internal adventure is expendable.

A producer of Thaïs can have their cake & eat it too, because the work offers one opportunities to put beautiful bodies onstage dancing & or posing in varying degrees of undress, even as the story includes protagonists who reject that philosophy. One can come to the opera as a Christian or a committed sensualist, considering the games the opera plays with its audience, inviting our gaze and exploiting our interest while trying to have it both ways with characters who deny their sensuality. With some operas you lose a great deal in making it a virtual performance,… But I’m not sure that Thais is one of those operas. The drama is largely in the head already, a conflict between different philosophies, different visions of how to live a life.

The composer created two large parts at the centre of the work. Thaïs is a soprano, a courtesan of Venus, eventually a saint. Athanaël, the baritone, is a monk from a religious order.  Athanaël is warned by his friend Nicias not to offend Venus, one of the places where the libretto follows the novel closely. In the opera Nicias says “Crains d’offenser Vénus, la puissante Déesse! Elle se vengera!” (or “Beware of offending Venus, the powerful goddess! She will avenge herself”) His cautionary prophecy tells all you need to know about how this story will unfold. Thaïs and Athanaël move in precisely opposite directions. She is the courtesan who gives up her riches & her life of pleasure (celebrating Venus), persuaded by the monk to choose instead a life of poverty & self-denial, eventually canonized as a saint. The monk Athanaël who lures her away from her hedonistic life to become a nun, becomes progressively more obsessed with her as a sensual object of contemplation. And of course with an audio recording as with a concert performance all of that is left to the imagination. Massenet’s score has exotic touches, a subtle delicacy & sweetness to inspire your imagination without being especially lurid or obvious.

You may have already heard a little bit of this recording played on the radio, namely the well –known violin solo known as the “Meditation”. I heard it the other day played by concertmaster Jonathan Crow, both because the TSO’s recording of Thaïs has already become a best-seller, and of course because it sounds so beautiful.

I was lucky enough to hear Crow play it at the ALS benefit concert last summer accompanied by members of the TSO.

Sir Andrew Davis is a bit of a wysiwig conductor. What you see is what you get.  Davis gets a wonderful committed sound from the TSO, big & bold when necessary but often with a child-like simplicity that makes me admire Massenet more and more. The textures are as transparent as the clothing covering the dancing girls. We can always hear the singers, the climactic moments are powerful, but never overdone. Davis makes a wonderful case for the opera & the composer. At times Massenet’s dramaturgy is subtle, at other times? you can see the wheels turning & the gears shifting. Davis pushes his soloists to the limit, to be dramatic & encouraged to compete with the orchestra. In the big moments that works well, and so what if it’s not terribly subtle.

The principals? Joshua Hopkins as Athanaël sings beautifully. He has a lovely line, a lyric voice that’s very smooth in the middle, not totally convincing at the top, as the highest notes don’t quite blossom & grow as one would hope. The way it quiets & tightens at the very top suggests he isn’t quite right for this role, perhaps better off in lighter roles such as Figaro. But this sound is apt for the obsessive monk.   I think Erin Wall’s Thaïs is perfect the way the opera is written, given that all the amazing subtext I’m finding in the France novel is missing from the score. She seems to give up her life almost on a whim, won over by the passionate energy of a stranger who demands that she abandon herself to his guidance, like a spiritual Svengali. Wall is up to the challenges of the role, hitting all the notes.  Anthony Staples as Athanaël’s friend Nicias has a lovely direct sound, perhaps a bit lighter than what the role requires in an opera house, but a perfect match for the TSO.

David Fallis makes his contribution in getting a wonderfully ethereal sound from the chorus  (members of the Toronto Mendelssohn Choir) in the first part of the opera and again towards the end.

You can find out more about the TSO recording of Thaïs on Chandos here.