Canadian soprano Ileana Montalbetti has been one of the standouts in the new Canadian Opera Company production of Peter Grimes.  The Toronto Star’s review, for instance says

“when we start to consider Ileana Montalbetti’s saintly Ellen Orford, we are in the realm of greatness. The heartbreaking emotional openness of her voice and the wealth of feeling she gives every moment mark her as the beating heart of this production.”    (Full review)

Last season included debuts with Edmonton Opera as Antonia in The Tales of Hoffmann (Offenbach) and Michigan Opera Theatre as Leonore in Fidelio (Beethoven).

Montalbetti is a graduate of the COC’s Ensemble Program & the University of Toronto’s Opera Program, a winner of the 2012 New York District Metropolitan Opera National Council Auditions and a 2012 Encouragement Award from the Sullivan Foundation.   She placed second in the 2011 Christina and Louis Quilico Awards and was nominated by the Canadian Opera Company to compete in the 2011 Stella Maris Vocal Competition.

I’m looking forward to seeing Peter Grimes for myself this week.  In anticipation I ask Montalbetti ten questions: five about herself and five more about her portrayal of Ellen Orford.

1- Are you more like your father or your mother? 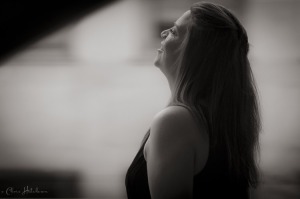 My mother is a trained singer and the Artistic Director of Saskatoon Opera and my father is a trained stage actor.  For the obvious reasons, I would say I am a good mix of the two.  I have always been drawn to performing and I completed a year of theatre studies before switching to voice performance.  They are both artistic, independent, free thinkers and I know I have these traits from both of them.  They followed their dreams and spent the majority of their 20’s living, studying and working in Vienna.  This has prompted me to always follow my dreams, to work as hard as possible and never give up. They are extremely supportive but never led me to believe that this career is easy.  Having such wonderful examples has helped form me into the artist I am today.

2- What is the best thing or worst thing about being a singer?

To be a singer is to be an eternal student which is wonderful but also challenging.  Musicians are perfectionists but the job is never and will never be done and this is where the frustration and challenges lie.  Our career also requires a lot of sacrifice and there is quite a bit of instability, one must be very flexible and adaptable.

And even though there are times when I am missing friends or family and I am alone in a hotel room I feel very lucky to have acquired these skills and traits through being an opera singer.  One of the best things about being a singer is the opportunity to travel and meet people from all over the world.  I feel incredibly blessed to have close friends on many continents and to feel love and support from so many people and places!

My iTunes consists mainly of opera and the singer I listen to the most is Adrianne Pieczonka.  I have looked up to her for many years and consider her one of my role models.  She is extremely kind and generous and one of the most genuine artists I have ever seen perform.  I have been lucky enough to coach with her and to get to know her a bit on a personal level and she is incredibly supportive.

Aside from opera I really like the group Pink Martini.  When I worked at the Music Store at Roy Thomson Hall we listened to their CD’s all the time and I own all of them.  When I am walking around the city that is what I’m usually listening to.

I wish I could fly!  That would make all my traveling MUCH easier and it would also allow me to sneak visits in to my loved ones whenever I wanted!

I watch a lot of TV; Downton Abbey, Breaking Bad, Mad Men, Grey’s Anatomy, Game of Thrones, Scandal and (I may regret saying this) but I am a bit of a reality TV junkie – it’s my guilty pleasure!  I’ve also taken up knitting!  I learned to knit for the role and it has now become one of my hobbies!  I really enjoy it!

1-How does portraying Ellen Orford challenge you?

Ellen is an extremely complex character and it has been a challenge, as an actor, to find the core of her character.  She is a school mistress in a village full of narrow minded people and being an educated woman and a free thinker has led her to be a bit of an outcast along with the fact that she has aligned herself with Peter, who the whole town is very sceptical of.  Vocally there are many challenges in the role as well.  Britten’s music requires a lot of concentration and I feel like I always need to be counting.  Also, the duet with Peter in the Prologue is unaccompanied and, basically, the first music I sing so that is always a bit of a nail bitter!

2- What do you love about your role?

I love Ellen’s strength and fortitude and playing this amazing character has helped to develop my own strength and fortitude, not only as a singer but as an artist and person.  I am surrounded by an amazing cast of colleagues, including the phenomenal Ben Heppner.  Watching him and my colleagues fully embody their roles has pushed me to dig deep inside of myself and discover who Ellen truly is.  The learning curve on this contract has been steep but the growth I have made as an artist is priceless.  It was, of course, a bit nerve wracking on the first day, especially being opposite Ben, but they have all been incredibly generous and supportive and have always made me feel like I belong.

3-Do you have a favourite moment in the opera?

The opera is full of amazingly dramatic and intense moments and there are many that grab me.  I would have to say my favourite is near the end of the opera where the entire chorus and most of the principals come right down to the front of the stage and sing “Peter Grimes” three times.  The silence between each reiteration of his name is spine chilling.  Our chorus is one of the best, if not THE best, in the world and to hear them in this moment but also in the entire opera is absolutely phenomenal.

4- How do you relate to Ellen Orford & her relationships to Grimes & the town, as a modern woman?

I relate to Ellen in many ways and I think she is a very progressive and modern woman in her own right.  She stands up for what she believes in and for the people she cares about.  Her relationship with Peter is challenging as she sees someone who is hurting and wants to save him.  I care very deeply for all of my friends and family and want to be there for them all the time so I relate to her in that way.  I also relate to her very directly in her love for children as I nanny for many of my friends and colleagues between gigs.  I have always loved children and being with them and, I believe, Ellen does too!  They teach us so much about ourselves, especially about honesty and being in the moment.  Being both an opera singer and nanny has provided me with a wonderful life balance.

5-Is there a teacher or influence you especially admire?

I have the deepest admiration and respect for both of my teachers; Mel Braun and Wendy Nielsen.  They both have a tireless work ethic and commitment to their teaching and the craft of singing.  They have stuck with me through thick and thin and have always believed in me and encouraged me to work hard and dream big.  They have taken countless hours to work with me on honing my craft. I would not be here without them!

I also owe a lot to the Canadian Opera Company and Alexander Neef.  Alexander has become an incredible mentor to me.  Being a member of the Ensemble has shaped and formed me into the artist I am today.

Ileana Montalbetti continues her portrayal of Ellen Orford in the Canadian Opera Company production of Britten’s Peter Grimes until October 26.

4 Responses to 10 Questions for Ileana Montalbetti