I Am Not An Answer at Cooper Cole Gallery

I suppose it depends on the question…

If you were asking “what is art” you could find at least a couple of ways to answer that question at Cooper Cole Gallery. Art is a calling. It’s a business. It offers windows and portals into other lives, encoding the memory RNA of one person into a concrete object leaving one asking new questions, such as “what was the artist thinking?”

Gallery owner & curator Simon Cooper Cole, in front of one of the Gerald Ferguson pieces in the show “I Am Not an Answer”

As I walk around a gallery one of the questions I ask is “why these artists, and why at this time?”

Simon Cooper Cole decided to put four artists together in “I Am Not An Answer”, the show that opened yesterday at his gallery on Dupont near Dufferin in Toronto.  Cooper Cole gallery is a fascinating three level space where one walks around enjoying the different views of anything displayed inside, a flattering space with interesting light, and right now, four complementary artists.

Two are younger, two are older. Two are painters whose work is on the walls, while the other two sculpt or install art in three dimensions.

At opposite ends of the space one encounters the soul-mates who never met.

Gerald Ferguson died in 2009, leaving behind a conceptual legacy in Canadian art. Two of his paintings can be found at each end of the space. Each is a kind of print made from an object (I think it might be a sewer cover or manhole cover) with paint or ink on it, pressed on untreated canvas. The shapes he makes are pure and spare with an almost unbearable rigour, the pristine clarity of an Escher through the use of something existing de facto in the world, a composition made from what is already there in the world.

Zoe Barcza was born in 1984, (and full disclosure, is also my daughter) and has been very busy lately, having exhibitions on both sides of the Atlantic, and a solo-show last spring in New York City. Her one piece in this show is five meters across, continuing an ongoing exploration of surfaces that look ripped or torn, seeming to show what’s underneath. They’re quite arresting in person.

Ferguson and Barcza seem to be from the same family tree, variations of minimalist and conceptual, understated but over-powering as a result. 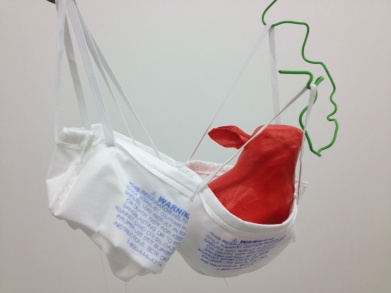 Everything else in the room must enter into a dialogue with these works that reframe whoever and whatever is in the space, from other works of art to people drinking beer and talking about the art. In between are the three-D creations. Where the works on the walls are inscrutably understated the pieces from Georgia Dickie seem ironic, darkly comical in combining macho icons in one work, and merging the menace of safety devices with the vulnerability of a bunny-rabbit in the other.

And Robin Peck’s pieces are on small pedestals around the room in the space between the paintings. I heard they were called “crania”, which to me is the plural of “cranium”: the top dome of the skull. Some are more human while others suggest something alien or primeval. One could meditate on the implications, especially when one is in a space containing several. Perhaps can be understood as another version of Ferguson’s minimalism, although up close they’re beautiful and wonderfully detailed constructions.

For further answers to all the questions posed above and maybe to see something better than my opening-night shaky-handed iPhone photos either go to coopercolegallery.com (where there will be real photography at some point) or go to Cooper Cole Gallery, 1134 Dupont St to see them in person.

This entry was posted in Art, Architecture & Design. Bookmark the permalink.