Gábor Maté: When the Body Says No

Dr Gábor Maté keeps turning up in my life. I just published a review of betroffenheit, a hybrid dance-theatre piece at CanStage, a co-production of Kidd Pivot and Electric Company Theatre, and there at the end I mentioned a PTSD forum coming Saturday with Jonathon Young, Crystal Pite: and Gábor Maté.

In a country that seems to be trying to get over a decade of Harper Conservativism, Maté is an avatar of recovery.

At the talkback after betroffenheit I couldn’t help noticing the intensity of the audience response. I’m reminded of Ancient Athens. There? The great tragedies were part of a universally known culture culminating in a festival where you’d expect everyone to attend: at least that’s the way it happened if my personal mythology is even close to being accurate. Can we imagine anyone asking an Athenian to contribute to a theatre company, to avoid falling attendance, or to turn off their smartphone and pay attention? But this group of Torontonians didn’t seem to need any admonitions.

The Toronto theatre crowd are educated & literate. How many of us have studied some aspect of theatre? I saw a few whom I’d met studying theatre, including a second generation student who worked professionally. A show like this one resembles a sacred festival in its ability to remind us that yes theatre can work miracles. But instead of religion it’s something else, the intersection of drama and the personal. I used the word “psychodrama” to describe bettrofenheit perhaps because the genre seems to turn up a lot lately. When I think about it both of the Canadian Opera Company shows –François Girard’s Siegfried, locating all the action inside the boy’s head, and Claus Guth’s Marriage of Figaro, personifying a disruptive libido figure onstage, pulling the strings in the action—could be understood as psychodramas. And the best kids film I saw this year was not Frozen (although speaking of obsessive-compulsive behaviour, maybe I am a bit shell-shocked from having seen it over 10 times, having played through its score at the piano, having sung its songs with assorted family members; perhaps i should let it go?) but Inside Out, a children’s film that included the conceit of a kind of internal psychological control room very much like what we see in betroffenheit.

I met Gábor Maté September 27th 2015 when he gave a talk at the George Ignatieff Theatre, following up on an interview earlier in September. I used the title “Ayahuasca and the authentic self” because that’s Maté’s message. Psychedelics such as Ayahuasca are powerful because they strip. away those fake layers that we’re undertaken as defense mechanisms. Perhaps “layer” is a synonym for “self”, where we have created a façade or two to blend into the world we aspire to be part of. At the deepest level is the person we left behind when we ceased to be authentic & real: who we were as a child. 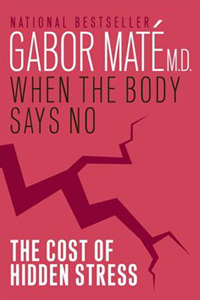 When I met him in September I told him I had Ankylosing Spondylitis, an auto-immune disorder. He suggested I read When the Body Says No, one of his books. And I did so.

It’s a natural extension of what I had heard in the lecture, about the authentic self and the layers we create to adapt to / escape from the real world. The relationship between the body and the mind is something that is resisted in the positivist world of hard science and cautious press coverage, but one that is eagerly embraced in such communities as new age enthusiasts for self-help practices, including everything from yoga to meditation to community theatre. Yes, those of us who did much theatre encountered voice and body disciplines—including yoga—along the pathway.

I finished the book a few weeks ago. It’s not precisely happy news, reading this book as an auto-immune sufferer. Yet it explains something I have long suspected. While scientists usually explain diseases 100% in the language of science (that is, via virus or bacteria or other agent of infection), Maté speaks using a different kind of language. I mentioned this in my earlier Ayahuasca piece: that Maté speaks and writes on the interface between science and religion, between the precise and unforgiving language of a doctor and the sweet forgiving discourse of harm reduction & addiction. Maté is a rare bird, because he is unconditional in his tone without abandoning the language of science.

In fact Maté himself lives on that boundary. He is a former doctor. And so in When the Body Says No we encounter a series of case studies, examples of people with ailments encountered during time as a doctor. Maté is no longer a doctor yet he still can call up anecdotes to illustrate his books and lectures. We are told of the weaknesses of the positivistic approach of the sciences.

Maté is a natural for anyone already open to seeing the transcendence of the body-mind relationship, with healing powers that may seem miraculous. For further information click.

This entry was posted in Books & Literature, Personal ruminations & essays, Psychology and perception. Bookmark the permalink.

2 Responses to Gábor Maté: When the Body Says No