Ashlie Corcoran, Artistic Director at the Thousand Islands Playhouse since 2012, Co-Founder and Artistic Producer for Theatre Smash, directs both theatre and opera, working across Canada and internationally. Next season Ashlie will return to Toronto to direct the Canadian Opera Company’s revival of Diane Paulus’s production of The Magic Flute. But in the immediate future Theatre Smash in partnership with Canadian Stage, in association with Thousand Islands Playhouse present das ding (the thing) by Philipp Löhle, translated by Birgit Schreyer Duarte, to open April 12th.

I asked Ashlie questions about herself and this exciting project.

I hope that I am a blend of both of my parents! I definitely get my work ethic from my mom and my determination from my dad. My parents very much support me – as a child they introduced me to a wide range of activities: the arts, athletics, volunteerism and community engagement. They always encouraged my curiosity. I moved away from my home province at 18 – but my parents have always been a big part of my life. They come to visit me often, and I am always in contact with them. Though, I am embarrassed to say I missed my Dad’s birthday last week – I am going to make it up to him soon! 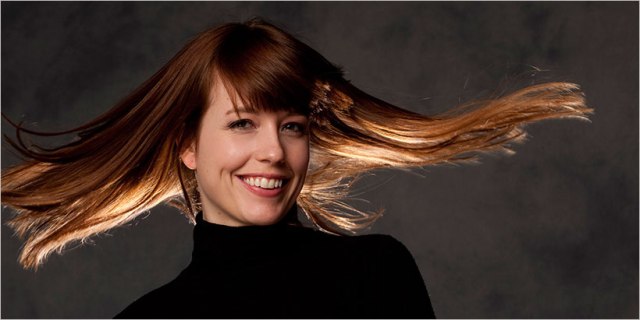 2) What is the best thing about what you do?

The best thing about what I do – whether it is artistic directing, directing theatre or directing opera is the collaborations I get to have with incredibly bright, passionate and talented individuals. I always find it thrilling to be in a room of experts from whom I can learn.

It’s the cliché right now – but I honestly can’t stop listening to HAMILTON. I have a bunch of music projects coming up, and I know I should be listening to them…but every time I grab my Iphone, my fingers hit play on the HAMILTON soundtrack instead!

I really wish I could sing. And speak Italian, German, French and Russian fluently.

As anyone who is friends with me on social media knows – I have a 1.5 year old English Springer Spaniel named Mabel. Playing fetch with her is high on my list of favourite past times.

Philipp Löhle’s highly ambitious social comedy Das Ding spans an interconnected world that binds the fates of the African Siwa, Chinese business people, Romanian pig-breeders and two young newlyweds Katrin and Thomas. As a global crisis attaches itself to the smallest marital problems on a deeply personal level, all are forced to consider whether such a thing as coincidence can exist in a globalized world. Meanwhile, the eponymous ‘thing’ – a cotton fibre in its apparently endless iterations – looks on humanity, amazed.

Since Theatre Smash was founded we have wanted to commission translations of international contemporary work. Our work on German language plays (The Ugly One, The Bus & Norway.Today) showed us that both our artists and audiences have a particular facility and attraction to these highly theatrical and deeply intellectual scripts. Birgit Schreyer Duarte and I wanted to work together on a project for awhile. We decided that it would be great if she translated a play for Theatre Smash. She pitched three different plays, but this was definitely the script that got us both the most excited. I love non-naturalistic plays where form and content share equal dramaturgical importance. What makes Das Ding (The Thing) so exhilarating and truly contemporary is how it examines the structures of the world financial order, while also happily examining the architecture of playmaking. The script inspires us to believe we are travelling across the globe in seconds or inside the mind of a cotton fibre.

2) Talk about Löhle’s writing and what resonances we might expect.

Through a temporal and geographic explosion, and with five actors playing thirteen interconnected characters, the play attempts to put the entire world into its focus – in all its tricky, comic and tragic entangled-ness. The theatrical possibilities inherent in this script are almost unlimited. The audience and creators are invited to joyously play along with their imagination, while also using their intellect to piece together the various scenes and relationships. This form helps examine the play’s central ideal – there are innumerable consequences brought about by everything we do. Nothing is the end; events constantly reverberate through the world.

3-Talk about the unorthodox casting for Das Ding.

While the play involves thirteen characters, we have chosen to cast five actors. Because of the play’s diverse temporal and geographic form, and because each actor plays up to three very different roles (in gender and ethnic background), we are excited to cast non-traditionally – including cross gender casting and blind casting. It is important to us that the casting for The Thing included multiple ethnicities: the play takes place in North America, Asia and Africa. However, no actor was cast in a track that involved him or her playing his or her own ethnicity. (Except for the Canadians – who we imagine as potentially being any ethnicity.) Additionally, while the casting breakdown says that there are two female characters and eleven male characters, we have chosen to cast two women and three men. Through this multi-ethnic/cross-gender casting, we are attempting to examine the script’s main idea – that we are all connected to each other, in small, almost arbitrary ways. In my directorial concept, this will also be explored by having the narrative of the Cotton Fibre distributed amongst all of the actors.

4-Please comment on the translation, and how you and translator Birgit Schreyer Duarte have made the play intelligible to a Toronto audience.

What a great question! First of all we translated the play directly – this involves a lot of detail work as we scrutinize each line, looking to see if it captures Philipp’s original intention, and also is accessible to our audience. We have now, with Philipp’s permission, pushed the translation into adaptation in some cases – setting its central story in Toronto. As a pluralist society, Toronto is a highly relevant place to discuss the blurred geographic, linguistic and cultural borders in our globalized world. Additionally, by placing the play in Toronto, we will strengthen Philipp’s original intention of using direct address as a self-aware and self-critical theatrical metaphor.

5-Next season, as you return to direct the Canadian Opera Company revival of Diane Paulus’s Magic Flute, I wonder if you could please comment upon the influence of your time with the COC’s Ensemble Studio.

Being asked to join the Ensemble Studio in 2006/7 was akin to winning the lotto. I had no opera experience at the time (I’d maybe seen a half a dozen as an audience member). In applying, I thought that I would use the year (if I got in) to explore whether I liked directing opera. But, during the call back (when I directed a scene from both COSI FAN TUTTE and ALBERT HERRING), I fell in love – hard. I didn’t need the year to figure it out – I was an immediate convert. The COC has given me a lot of opportunities in the subsequent years – assistant directing, and directing their school tours. I have learned so much about opera, about theatre creation, and about how to engage with a community, through that organization. I am beyond thrilled to return to direct on the main stage next winter.

6-Do you have an influence or teacher you’d care to mention who is especially important to you?

Ah, I am so lucky to have so many great mentors in my life. University professors like Dr. Tim Fort, Dr. Craig Walker and Anne Hardcastle jump out immediately. Mallory Gilbert and Richard Rose – both of whom I met at Tarragon Theatre – have had a massive impact on me, as has the mentorship of Daryl Cloran and Atom Egoyan. All of these people – and so so so many more – have been incredibly generous with me. I strive to be as open hearted with others, as they all have been with me.

In January 2017 Ashlie Corcoran directs The Magic Flute for the COC here in Toronto. But in the immediate future –April 12th to May 1st 2016– Ashlie directs das ding at Berkeley Street Upstairs Theatre (for further information).

This entry was posted in Dance, theatre & musicals, Opera. Bookmark the permalink.