I knew how it was going to work. I resisted and was still swept away by the conceptual brilliance of A Little too Cozy, Against the Grain’s latest transladaptation. Don’t let the word scare you, it merely means something that is both a translation and an adaptation. AtG artistic director Joel Ivany has now completed his trilogy of the Mozart- da Ponte operas, previously giving us Figaro’s Wedding (brought to Toronto in 2013 after an earlier workshop process in Banff) and #UncleJohn (2014). 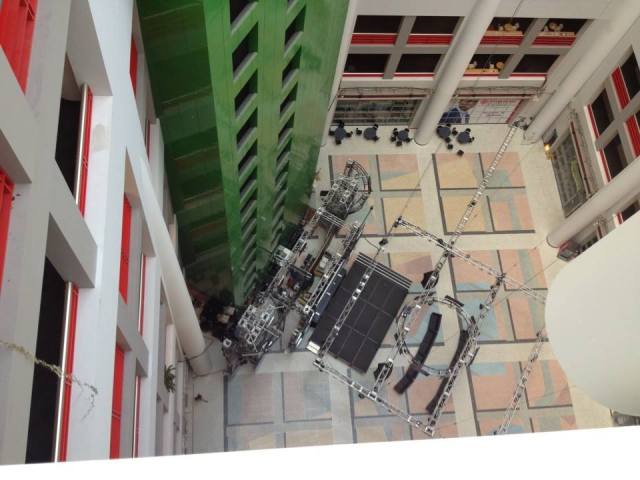 Ten stories up inside the CBC building, this is the view from my phone (dangled over the railing please note) on the way to see the opera: in a TV studio.

We come to the CBC Building on Front St, with a front door guarded by Glenn Gould’s bronze image, ascending to the 10th floor in a studio that we hear is alongside where they do Hockey Night in Canada (one of my favourite CBC shows) and Dragon’s Den (absolutely my least favourite).

A Little Too Cozy is many things, but above all it is meta-theatrical, a layered creation that is like an opera within an opera, or perhaps an opera within a reality TV show. By seating us in this iconic place the reality is so perfectly authorized that the opera is almost incidental. It’s just about the coolest place I’ve ever been to see an opera (as an opera fan I’d say Lincoln Center is cooler, but only just barely).

The space dominates the experience. Long after the show is over, you are still walking through this place with photos of stars on the walls, a kind of technological cocoon that protects the perfection of broadcast from the outside world. What a coup for AtG to get their opera produced in such a perfect space…!

We watch this opera, even though we hear singing + a tight ensemble led from the piano by Topher Mokrzewski. The space is far from ideal acoustically, given that TV studios are dry rather than reverberant, and not hospitable to big powerful voices. While Cairan Ryan as Donald L Fonzo, the host of the Cozy show (Don L Fonzo = Don Alfonso from Mozart’s opera), was surely the lightest bass voice I’ve ever heard undertake the role, he was the most successful negotiating the acoustic, every word crystal clear. We observe the performers while seeing them also on monitors, captured by a cameraperson. At one especially powerful moment we watch Clarence Frazer as Elmo (the lover formerly known as “Guglielmo” in the original) freak out on camera as Fernando comes on to his betrothed. It’s as disgusting as reality TV or the plot of this opera, but foregrounding the phony performative aspects of romance. Frazer is sometimes funny, sometimes very sympathetic, and does very well in his close-up.

Yes I resisted initially –as I do with anything that’s so clever it captures my imagination—but I was won over. I should perhaps add that I am conflicted about this opera, which means I was especially impressed with how well Ivany’s concept worked. There we were down the hall from CBC’s greatest reality TV achievement –the aforementioned Dragon’s Den—watching impressive echoes of the genre. There are those cliché moments when the lovers are shown in flashback on film with soft-rock accompaniment. There is a lot of dialogue (as opposed to recitative). And above all, there’s the space, always visually intriguing as we are in a self-referential place. Of the three transladaptations, this one seems least encumbered by the devices of opera, emerging into a new hybrid genre, without any creaky shifts of gears between numbers. We are watching something resembling live television, only rarely slowed for an operatic number.

When seeing something like this I often ask myself who’s most likely to enjoy such a thing, between the hardcore opera fans and the neophytes. This occasion seems especially rich in its rewards for first time viewers –and notice I don’t say “listeners”—as we’re in a very hip modern place. The more conservative opera-goer may resist, as I did, but I think they’d have to admit it’s quite a remarkable creation, one that adds extraordinary energy to the original. Instead of the bet between Alfonso and the two young lovers–a creaky plot device of the original that can be so troubling with implications of misogyny and straining our credibility when the same lovers show up in disguise– these problems are avoided.
The reality TV story we watch has them betrothed but never having met (as part of the premise of big money that they would win if they go through with it), eliminating that credibility problem. By framing the story about love and marriage in this exploitive context of modern TV romance we’re in an apt discursive place to be questioning relationships throughout. As a result I like A Little Too Cozy more than the original.

Caitlin Wood as Despina does what all Despinas do, namely steal the show throughout, given that she gets much of the best music and funniest lines. Aaron Sheppard as Fernando has many sympathetic moments. Shantelle Przybylo (Felicity, formerly Fiordiligi) and Rihab Chaieb as Dora (or Dorabella) were for me the most authentic part of the reality TV imitation, disturbing and possibly insulting as that might be to those women. OMFG but they are hysterically funny, hypocritical, and at the same time totally vulnerable. From their hair & fashion to their succession of wineglasses, they are genuine, and make you care about the outcome of the story: no matter who marries whom.

I can’t recommend this highly enough. See A Little Too Cozy.

This entry was posted in Opera, Popular music & culture, Reviews. Bookmark the permalink.