Ayre: An Evening of Osvaldo Golijov

When the organizational wizards of Against the Grain Theatre decided to present Ayre: An Evening of Osvaldo Golijov beginning November 10th I doubt that anyone recognized the significance of the date.  Had the American electorate made their expected repudiation of Donald Trump’s xenophobic platform on Monday, this might have been a fitting celebration of multi-culturalism, especially in context with the location of the concert, in Toronto’s Ismaili Centre. We witnessed a truly collaborative effort, presented in partnership with the Aga Khan Council for Canada, and the Glenn Gould School of the Royal Conservatory of Music.  The Canadian Opera Company should also be mentioned (who hosted this afternoon’s preview), as AtG are the inaugural COC company in residence, a relationship that so far looks to be a win-win relationship.

With the unexpected turn of events the program took on an additional gravity, a moment to recognize how fortunate we are in this city.

While Ayre was the biggest work on tonight’s program (a song cycle I also heard this afternoon), Golijov was also represented by three other pieces in the first half of the evening, and presented in a different way.  Ayre was performed from a raised stage to a seated audience, whereas the other works were given a more challenging presentation.

I don’t know if everyone read the space as I did, but for me this was a hugely significant choice, that we were in this beautiful space devoted to Islamic culture & art.  I’m reminded of the times I’ve seen music with a religious subtext presented in a church, whereby the resonances & implications are amplified.

We began with a string quartet playing Golijov in a somewhat disorganized space, people milling around, some blocking the view, some checking their smart-phones.  When I said “challenging” above, I meant to the audience’s civility.  We were given no instructions but allowed to find the music within the space, as though the music and musicians were another exhibit to view as much as hear.  With the beginning piece “Yiddishbbuk” as with the two songs that followed –each in a slightly different space in the Centre with a different configuration of listeners /watchers—we were allowed to find our way to the heart of each piece.  The quartet is almost a meta-religious piece, a provisional exploration of what might be or might have been (as the program note explains):

“A broken song played on a shattered cimbalom” Thus, writes Kafka, begins Yiddishbbuk, a collection of apocryphal psalms Golijov attempts to reconstruct that disappeared music, creating a three-movement work in the mode of the Babylonic Lamentations.”

Golijov proposes a music that the exiles might have sung or strummed, a first stumbling stagger in the general direction of the affirmations to come.  Lua Desccolorida a secular song sung by Adanya Dunn, and Tenebrae, an inspired meditation sung by Elen McAteer, lay the groundwork for our experience of  Ayre after the intermission. 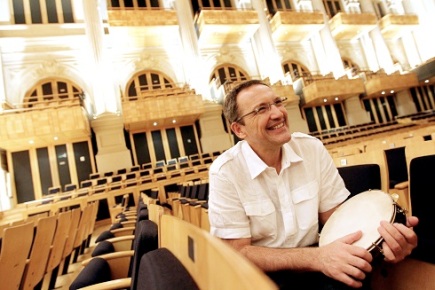 Golijov gave a lovely talk before Ayre that helped me understand one of the more puzzling parts of his composition.  The second of the songs baffled me, a lovely lyrical song, until you see the shocking text:

(complete texts for the cycle can be found here)

And a mother roasted
and ate her cherished son:

“Look at my eyes, mother.
I learned the law with them

Look at my forehead, mother,
I wore the philacteries there

Look at my mouth, mother:
I learned the law with it.”

Golijov framed this within the Lamentations, when a mother might be starving, but it could just as easily be set in Syria, or perhaps on a boat full of starving refugees.  With this context, suddenly the song made perfect sense, a breath-taking creation. 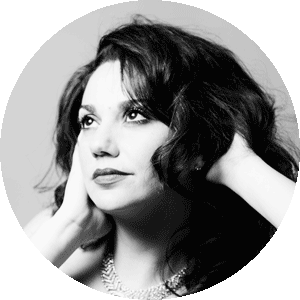 Seeing it done again confirms how special this moment is for Against the Grain Theatre, and for Miriam Khalil who sang the songs of Ayre.  The stars seem to have aligned with this project.  Imagine if Claude Debussy had premiered Pelléas et Mélisande with a non-native French-speaker, and then the joy of hearing the opera sung for the first time by a Francophone.  But Golijov conceived this work for American Dawn Upshaw, and must have been surprised to hear what Miriam Khalil—a Syrian-Canadian—could do with the text.  Her authenticity is palpable, whether in the romantic songs or the call to uprising of the third song: to which I might have started clapping in rhythm had this not been such a classical crowd.  I am hopeful that tomorrow or Saturday, Miriam’s fist-pumping will get the crowd to join her in this stirring piece.

I hope someone is considering capturing this on video or at least making an audio recording, as the chemistry of this group is truly special.

This entry was posted in Opera, Personal ruminations & essays, Reviews. Bookmark the permalink.

1 Response to Ayre: An Evening of Osvaldo Golijov