There are several different currents flowing through Roy Thomson Hall right now, and each one is inspiring the Toronto Symphony and their audience in different ways.

In the first half we were treated to Karen Gomyo’s precise & passionate reading of the Beethoven Violin Concerto.

Gomyo pushes the envelope with her dynamic range, beginning some of her phrases very softly, letting her tone crescendo through phrases, sometimes seeming to erupt with emotion. Her commitment was hypnotic drawing the audience into the drama of this titanic work.

For the second consecutive week I watched a new face lead the TSO. Last week it was conductor Hannu Lintu, leading a Beethoven symphony and a brand new work. Tonight it was Robert Trevino as the conductor, ably leading the TSO through the newest of the 2 minute fanfares to Canada’s birthday—a contrapuntal piece with palindromic tendencies from Cheryl Cooney—to lead off. Trevino followed Cooney’s Sesqui with the Beethoven violin concerto and concluded with the 1947 version of Petrouchka.

Where Lintu let his baton do his talking –leading a stirring performance—Trevino showed us the most affable podium manner this side of Peter Oundjian, explicating the Stravinsky score in such an unpretentious way as to highlight the comedy in the story of this ballet. 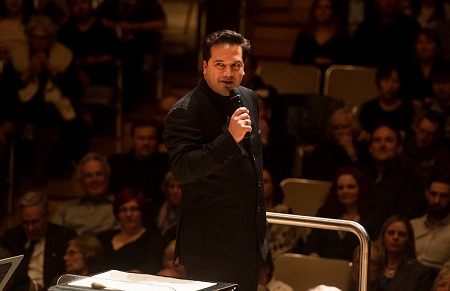 Robert Trevino, the charismatic story-teller, before he picked up the baton to conduct (photo: Jag Gundu)

Dare I say it, that this is what the TSO desperately needs?! I wasn’t the only one laughing, but more importantly, when the various comic bits came up in the score, people guffawed and giggled with genuine recognition.

And the performance! This isn’t easy music. Recalling the google doodle that you may have seen a couple of days ago, commemorating the 150th birthday of Sergei Diaghilev, there were three consecutive important ballet premieres from Stravinsky with the Ballets Russes:

I should perhaps also mention that Sunday’s concert for the TSO also includes Debussy’s Prelude á l’après-midi d’un faune: an 1893 composition that was also made into a ballet by Diaghilev in 1912. In tonight’s concert Debussy’s piece was not included. I’m not sure why they give us the shorter program Saturday. Petrouchka is full of amazing solos, much of it highly challenging music. I wish I knew who the piano player was, as their playing was especially good, one wonderful soloist among many (in the slower section resembling a piano concerto): but the others get their names listed in the program. Trevino was undaunted by the varied time-signatures, keeping the orchestra together, while gradually building the intensity and tempo to a scintillating conclusion.

I hope we see him again.