The Toronto Symphony’s Decades Project has taken the orchestra and its listeners on a gradual tour through history.  As we’ve progressed forward 10 years at a time we’re less and less able to escape, as more and more we confront the underpinnings of our own time, never more so than in last night’s visit to the 1930s, featuring Barber, Bartok and Weill, plus a world premiere of a short piece by Andrew Balfour.

While the first three items on the program were orchestral pieces, the stage configuration had us anticipating the fourth piece, to come after the interval:

I haven’t thought of Roy Thomson Hall as a stage before, but that’s precisely what we were invited to do through the first works we heard.   Theatre is often a matter of trade-offs, of pragmatic choices, and so we looked at the orchestra led by Peter Oundjian, a bit further away across an empty strip of real estate that glowed with the promise of what was to come.  Yet it was a positive in so many ways, as the concentration of the players upstage made for an interesting acoustic.  Because the players had a wall directly behind them and an open floor to bounce sound, I heard them with great clarity, even if the tightness of the spacing meant one couldn’t always see them too clearly.

When we came to the Brecht-Weill, we were in a kind of mixed medium space fitting for a hybrid that isn’t easily defined. It’s a sung ballet, but the TSO also employed some film mixed with the projection of surtitles, and deployed the performers in various spots around the auditorium. 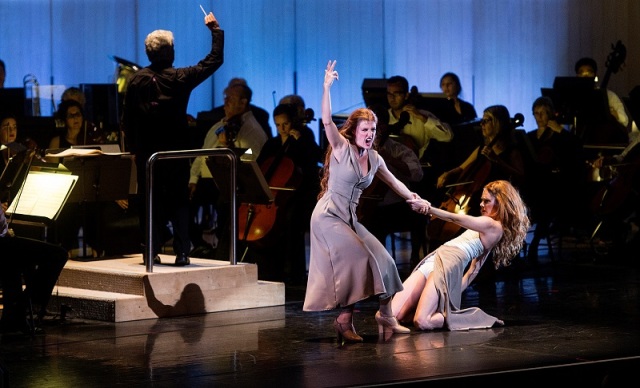 The work was ahead of its time, possibly because the personnel weren’t there in the 1930s, the way they are now.  What would Brecht & Weill have made of Cats, or more relevantly, how might they have employed performers who were genuine triple threats in this work?   The TSO opted for opera performers plus one dancer, sometimes choreographed.  Hybrid works –and let’s not forget that opera and ballet are both hybrids –sometimes have us wondering about the parents and influences, as we wonder about the choice of emphasis.  Opera struggled for centuries with questions about text vs music, often with liberal sprinklings of dance & other spectacular effects.  The TSO deserve credit for their ambitious programming, once again turning to Joel Ivany & his collaborators as they did last season for the Mozart Requiem.

There’s so much richness in the work, that it challenges the viewer / listener.  I didn’t know where to look or on whom to focus.  One could simply watch and listen to Wallis Giunta singing and occasionally dancing as one of the two Annas; or watch dancer / choreographer Jennifer Nichols dancing and occasionally speaking as the other Anna.  There is so much going on in the work to begin with, and then when you add movement, acting on multiple places onstage (for instance, when both Annas are there to confuse us with the ambiguities of their similarity / difference), one can focus in many places, not to forget that one might simply listen, while watching the TSO and Oundjian working away upstage, not unlike the dance-band you’d see in an old Hollywood musical.

And nevermind the 1930s, there were many resonances with the recent past, meaning the creators:

Our attention was torn between the dramatic elements, the choreographed elements, and the pure joy of watching and listening to Giunta interpret the songs, which was aided considerably by some sort of electronic support.  This freed the orchestra to play more or less at will –which was ordained once they decided to face Oundjian upstage, who was unable to really watch or follow; but the way the levels were set, the men were relegated to backup singer status at times.  Ivany’s staging brought out the dark humour in the text, which is (or should be) steeped in the class struggle of the 30s, now somewhat quaint in light of the current brouhaha south of the border.  Karl Marx seems as faraway as Frank Capra, a relic for our sentimental fantasies.  In other words I would have welcomed more political edge, but I suppose the danger in this medium is that one can slide into something bombastic & obvious, whereas Ivany and Nichols kept things very subtle.  The best moments gave us a kind of cabaret sensibility.  I can’t help thinking that this was a work created ahead of its time, that deserves to be done more often, to become more familiar.

I should spare a moment to speak of the pieces occupying the majority of the program.  We began with a wonderfully subtle Sesqui from Andrew Balfour, a work that I don’t want to underestimate, that seemed minimalistic in its two minutes of pulsing and brooding, never overdone. This was the least celebratory Sesqui I’ve heard yet, but given its Peoples of the North association, this is a thoughtful commentary in a year of self-congratulation.The familiar Barber piece came out of that upstage configuration quite well, the cellos situated far upstage but penetrating the texture easily, whether as a byproduct of the stage configuration or through Oundjian’s machinations.  The Bártók in the middle of the program was again a slightly disturbing effect, listening to the orchestra displaced by the space to be used in the Weill, and deployed (as Oundjian explained) symmetrically as two orchestras as per the score.  Was I listening more closely because I had to work a bit harder to see them, clustered upstage? I don’t know.  I may be projecting, but Oundjian seems very relaxed, like a kid still in school during the last week of school, grinning and without a care.  The TSO were totally responsive tonight, themselves seeming totally at ease.

The program repeats on June 15th, minus the Sesqui.

1 Response to TSO: a decade’s lessons