Toy Piano Composers play with us as they launch CD

When you stop and think about it, it makes sense. We “play” our instruments right? Then surely all instruments are in a real sense toys, broadening the implications of Toy Piano  Composers, a Toronto collective of music makers who just launched their first album Wednesday night.

And can we somehow retain the magic of a child in its first encounters with their toy, in their exploratory play?

Questions like that were running through my head at this truly extraordinary event at the Ernest Balmer Studio.  There was the usual drinking & schmoozing, which are also playful impulses, but drives to which I can’t surrender when I have to drive: home to Scarborough that is.  But I certainly wanted to celebrate along with them.

The name “Toy Piano Composers” is more than jest, especially when you hear the sort of music we heard in tonight’s programme, all compositions found on the CD. 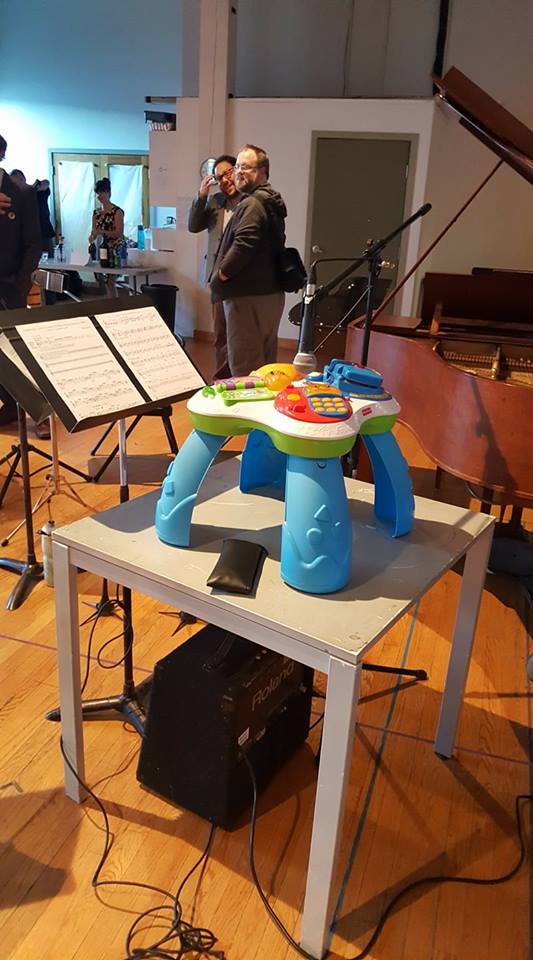 It sounds as cute as it looks

We began the Denburg piece with something coming out of a Fisher Price toy, automated or perhaps preset for sounds / voices to be pumped out when you push a particular button.  And so we heard the cutesy voice from the Fisher Price.  And WOW you couldn’t script it better, when the toddler sitting in front of me ANSWERED, because the magic of that toy spoke to him or her.  The entire audience was galvanized by the experience, which takes the entire thing to its most existential level.  But this dialogue between organic and artificial sums up the entire night, if not the album as well, on a fascinating interface. Yes there was some of the post-modern edginess of sampling but if this was angry hip-hop it was the crankiness of someone needing their diaper changed. In other words we were in a very safe and self-aware place.

Denburg’s piece is a kind of meditative conversation between the instruments playing a bit like robots –in the sense of Rossini rather than sci-fi, retro music constructed into fast runs with a kind of comical Barber of Seville frenetic- mechanical flavor. [spoiler alert] We get a whimsical bit of Eine Kleine Nachtmusik, counter-intuitively in the wrong key just to be even wackier.  Music is coming out of the instruments, and it’s not clear who is in charge, between the Fisher Price and the six players, who seem to be automated or robotic even as the whole thing is very playful and fun. I recall the magic in this very same space not so long ago (2014 as it turns out), when Tapestry gave us one of their workshops of incomplete works, in this case a bit of Nicole Lizée’s masterful adaptation (five minutes worth) from Capek’s R.U.R., the famous play that gave the world the word “robot”.  Both then and now, I feel that double-edged magic, that we are seduced by the automated music even as we are terrorized by the implications.

The next piece, by Fiona Ryan, also explored that threshold between the musical player and the more organic sound, this time from the realm of birdcalls generated artificially.  I am always grateful when “new music” finds a new way to explore realms that are genuinely beautiful, or to articulate a new kind of beauty.  When a flute seems to converse with one of those mechanical birdcalls, we’re in a funny area, perhaps a parody of one of those romantic virtuoso cadenzas such as you find in Norma or Lucia where the singer and an instrumentalist imitate one another, sounding a bit like birdsong, but mostly like a cadenza in a concert.  The discursive space this opens up is wonderfully thorny, as we may wonder just what this music really is, as far as its origin.

After the intermission – with lots more carousing, drinking and good cheer—we resumed with two more pieces.

clangor takes us to the interface of mimesis, where we are listening to sounds in a toy piano of all things, being juxtaposed with bicycle bells, and the lovely fading of those haunting sounds. While no one says anything is being imitated –as with the previous piece—I can’t help reading something into the sounds that resemble one another, close together in the composition, as though they’re voices learning from each other or perhaps even in conversation.   Again this is music for the investigation from first principles: as though one were a child.  And if we’re lucky that’s how we are able to hear.

And Walking is a powerfully virtuosic work, especially challenging for Daniel Morphy, the percussionist.  If I hadn’t seen it played live I would have wondered, but he was crisp & accurate throughout, bringing the audience to their feet for the biggest ovation of the night, admittedly for a work that challenged the entire ensemble as well
(The personnel from the CD: Pratik Gandhi, conductor, Tim Crouch, flute, Anthony Thomas, clarinets, Wesley Shen, piano/toy piano, Adam Scime, double bass.
Last night though,  special guests Stephanie Chua playing piano/toy piano/bicycle bells, and Suhashini Arulanandam on violin.).

As a bit of magic we heard an encore performance of the FISHER PRICE.

And so we heard four of the seven pieces on the CD (that was not only launched tonight but given to everyone who paid to get in).  I’ll give it a listen and tell you more in due course, particularly once I figure out how you can also buy a copy of the CD (that I received as part of my admission to the concert).

[to buy the CD try this link]