There’s a curious mix of adventure and nostalgia that goes with the annual Canadian Opera Company’s Ensemble Studio performance of one of the season’s operas.

After having seen a production with a cast of seasoned professionals, each year we get a chance to see the same thing redone with the young talent in residence at the COC.  It could be Diane Arbus’s Magic Flute (2011) or El Comediants Barber of Seville (2015), or this season –last night in fact—it was Claus Guth’s Marriage of Figaro.

We’re watching young singers moving towards professional careers. The momma and poppa birds, aka the professional mentors & teachers at the COC such as Liz Upchurch, Rachel Andrist, Johannes Debus, Alexander Neef, watch conflicted.  Their little songbirds take bold test-flights out of the nest.  Does one feel pride at the growth seen over the past couple of years? Or perhaps sadness at the imminent departures.  It may be the first time we see what a singer can do just as they’re standing close to the door, about to leave.

There’s another layer to this, if I didn’t hear wrongly.  In February 2017, instead of an Ensemble Studio performance of an opera we’ll see a series of scenes in a Showcase presented by members of the studio.  So there’s an additional bit of nostalgia given that last night may have been the last time the COC made the huge investment of energy and money to put their Ensemble Studio into a performance of an opera.  What an opportunity!  I can’t help connecting the weak Canadian dollar with this decision to abandon the fully staged Ensemble performance, even as I wish the COC might offer more roles throughout the season to these talented singers as an economy measure.

So if this was indeed the Last Tango, nothing seemed to be held back in a truly fitting climax to a wonderful tradition.

Unlike opening night that I reviewed it was a very different kind of evening.  In fairness my joy in the younger cast is likely a reflection of my antipathy to the production.  Jane Archibald (Susanna) & Russell Braun (the Count) managed to capture something that was genuinely conflicted, a troubling emotional ambivalence that might be deeper and truer, surely more modern than what Mozart, da Ponte (and Beaumarchais) wrote, whereas Karine Boucher and Gordon Bintner last night (in the comparable roles) gave us something perhaps closer to Mozart and less true to Guth’s dark vision.  Was that because they’re younger?  I hope I can be forgiven for saying I liked it more last night, much more.

At least some of that enjoyment can be credited to remarkable interpretations.

I thought Gordon Bintner sounded like the second coming of Thomas Allen, but maybe I shouldn’t be surprised considering that he and Allen shared the role of Don Alfonso in the COC’s 2014 Cosi fan tutte.  Okay, he sounds like a younger version of Allen, complete with all the vocal power, fabulous diction, physical eloquence and good looks.  I’m very sorry I had to miss that 2014 Ensemble performance of Cosi, as this was—for me that is—the first and last chance to hear that awesome voice and confident demeanor in such a big part.  I remember wishing that he’d been given more opportunities to shine on the Four Seasons Centre stage, thinking especially of a mis-casting I recall from 2014 when Quinn Kelsey played Sancho Panza, a bit of a fish out of water singing below the best part of his range instead of appearing in Roberto Devereux where his voice would have been idiomatic and a worthy match for Sondra Radvanovsky.  I wonder what Bintner could have done with the Massenet, admittedly a role that doesn’t offer the singer all that much to do.   So at the very least i suggest that Alexander Neef consider giving thankless roles to his (hypothetically low cost) Canadians rather than expensive imports.

And speaking of singers I missed in the 2014 Ensemble Cosi, there’s Aviva Fortunata, with a voice & commitment to match Bintner.  I wouldn’t dream of saying her voice sounds like anyone. It’s unique, but paticularly when she lets fly at the top of her range, it’s clear that the sky’s the limit. Speaking of ready-for-prime-time voices, I think it’s time for the COC to offer her a major role, something that she likely can do at the very least in a performance or two double-cast with a higher-priced singer.

The other two major players –Karine Boucher’s Susanna and Iain MacNeil’s Figaro—seemed like a happy antidote to Guth’s dark spin on Figaro.  I confess (okay it’s obvious by now), I really don’t understand the dead birds.  It’s probably true that this production makes tons of sense to the cast members who learned the subtext.  But I submit that when theatre is still about communication, rather than an arcane cult ritual of obscure signals understood only by the participants/celebrants, I shouldn’t have to read a big long treatise to understand what it means.  I’ve been in shows where we were all convinced of the brilliance of what we were doing, but if the audience doesn’t get it?  it doesn’t matter.  If you’ll excuse me for projecting, Boucher & MacNeil seem to be naturally happy people, or at least happy when onstage, completely at home at the centre of attention.  Their Susanna and Figaro seem ready for happiness in this version of the story, whereas Archibald and Josef Wagner were in that darker place, a sophisticated and modern couple that has everything to do with what Guth wanted but perhaps overlaid over what Mozart wrote.  I was far happier with what Dmitri Tcherniakov did last year with Don Giovanni even though both productions  (DT’s DG and CG’s Figaro) seem to show a progression, a change or evolution.  In the DG mankind seems to be outgrowing the seducer archetype; in Figaro we watch as the winged Cherubim –a very inconsistently applied deus ex machina –is eventually ignored by all except Cherubino.  If Cherubim is meant to suggest libido or the disorder of desire, the way he is ignored at the end would imply that in marriage we stop having sex. What? that’s ridiculous, an insight perhaps worthy of Fred Mertz, not Lorenzo da Ponte. Maybe I didn’t understand ? which brings me back to the earlier comment about productions that you have to be in to understand. 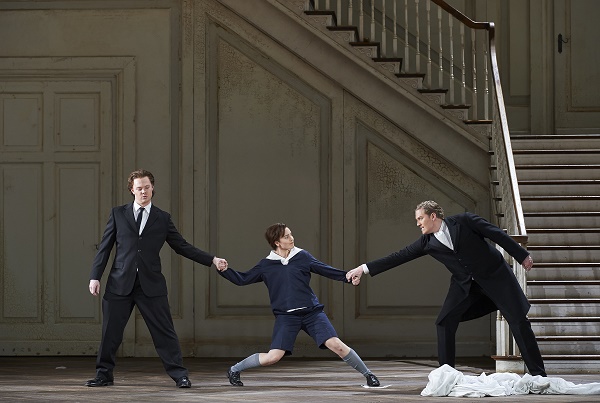 (left to right) Iain MacNeil as Figaro, Jacqueline Woodley as Cherubino and Gordon Bintner as the Count in the Ensemble Studio performance of the Canadian Opera Company’s production of The Marriage of Figaro, 2016. (Photo: Michael Cooper)

Against all odds this happy energetic quartet, particularly MacNeil and Bintner, manage to keep the story relevant to what they are singing, whereas I felt as cold as one of those dead birds watching Wagner, Archibald, Wall and Braun et alia singing “corriam tutti” on opening night.

My favourite performer opening night was Robert Pomakov, and chances are he heard me guffawing last night as well.  I felt he was the only one in the opening night cast who jumped over the chasm of Guth’s production to arrive safely back in the realm of sense when singing da Ponte’s words (quite a feat for a guy in a wheelchair).  Megan Latham was his new partner and eventual wife, and a worthy adversary for Boucher and MacNeil.  I had a bit of a laugh watching Jacqueline Woodley as Cherubino bemusedly picking up one of the white feathers strewn about the stage, as though suddenly recalling her recent heroics as a bird in white.  Between her fluid portrayal of a boy and Sasha Djihanian again stealing every scene as Barbarina, there were no weak spots in the cast, including Douglas McNaughton even more over-the-top as Antonio, Aaron Sheppard as Don Curzio and Jean-Philippe Fortier-Lazure as Don Basilio.

Some of these singers will be back next year.  For others it will soon be time to say “ave atque vale”.  Hail and farewell? i hope we’ll see them again.