What to expect from Ariodante

Part of me is dying to spill the beans about the Canadian Opera Company’s co-production of Ariodante that opened this afternoon in a matinee at Four Seasons Centre, but I have to tread carefully, as I studiously avoid spoilers, especially when the advance knowledge might subtract from your experience. The headline is a half-truth because I only tell you some of what to expect.

I’ll be a bit more open after I’ve seen it a second time. Let me just say that I am eager for a second look at this dense and layered mixture. Expect something complex.  It had people talking to strangers in the bathroom.

I think I’ve missed opera, given that I dished out a load of superlatives last night yet feel that what I just saw might have been better. Could it really be that good? or am I now just over-dosing after suffering opera withdrawal, a happy Pollyanna ready to gush about anything.

But maybe I’ll put it in perspective by speaking briefly about Norma again. The singing last night was amazing, yes, and without any messy directorial overlay to prevent us from getting at Bellini. But I think I was craving complex flavours, and the COC delivered.  This
Ariodante is the product of the team of Richard Jones and ULTZ. This is the same Richard Jones whose 1993 Royal Opera House Ring Cycle influenced other cycles, including that of Robert Lepage; those crumbling gods at the end of Brunnhilde’s Immolation Scene are done much better in what the ROH offered in 1993 (alas no longer available on youtube). ULTZ is the designer working with Jones, but I don’t pretend to know whose ideas we’re really seeing, other than to say that the outcome is very stimulating.

I would identify this as director’s theatre but with the caveat that it’s of that rare sort that illuminates without obscuring the original, and adding something in the process. With Handel I am never going to be a textual fundamentalist, because there’s no real tradition to point to, unless we seek to reproduce the productions as Handel made them in his failed attempts in London (a failure that leads him to oratorio, especially Messiah). Ariodante for example is full of ballet music, but that doesn’t mean a director necessarily uses those passages for dance. Sometimes Jones gives us dance, sometimes drama employing puppets designed and directed by Finn Caldwell. We get to have it both ways, as the story arc is presented to us, even if the characters onstage don’t precisely behave as the score prescribes. So in other words there likely shouldn’t be the sort of controversy we had over Tcherniakov’s Don Giovanni or Claus Guth’s Marriage of Figaro, both of which upset some people for the departures and alterations to beloved works. Ariodante doesn’t have nearly so many alterations, and more importantly, as a non-canonical work, nobody’s going to be terribly upset at departures from a story that most people don’t even know.

There are nonetheless additional layers that aren’t in the text. The action has been moved to a small Scottish island, the story set in a recent past even if the actions of the story –particularly justice done by fighting duels—are more fitting for previous centuries rather than recently. Such infelicities can be ignored when the director’s overlay illuminates: as this one does. It’s normal for Polinesso to conspire to undermine his political rival Ariodante (sabotaging his marriage to the princess Ginevra, not just by slandering her, but by arranging to have Ariodante see Dalinda, a co-conspirator dressed exactly as Ginevra seeming to have a liaison with Polinesso). In Jones’ reading Polinesso is a preacher whose rants get the tiny community of this production riled up at the sinful actions that Ginevra is alleged to have committed. 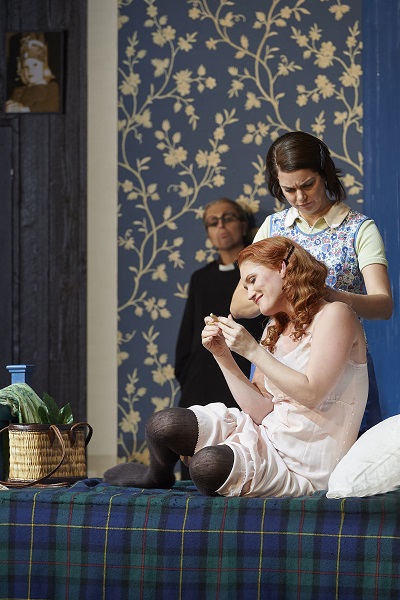 (l-r) Varduhi Abrahamyan in preacher garb as Polinesso (in background), Jane Archibald as Ginevra and Ambur Braid as Dalinda in the Canadian Opera Company’s production of Ariodante, 2016. (photo: Michael Cooper)

His co-conspirator Dalinda is not merely infatuated with Polinesso, but wears the visible bruises, as we discover a second rougher look corresponding to the person underneath. 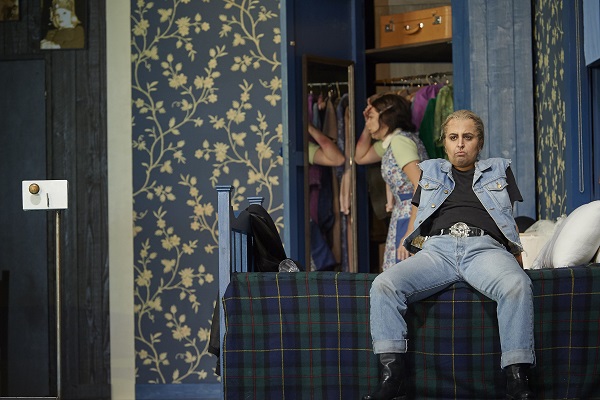 Varduhi Abrahamyan as Polinesso and Ambur Braid as Dalinda (in background) in the Canadian Opera Company’s production of Ariodante, 2016. (photo: Michael Cooper)

The action of the story invites comparisons between pairs:

Jane Archibald as Ginevra is the focus of the production, a starring role that makes great use of her vocal abilities. Hers is a different sound from that of Ambur Braid, who steals the show as Dalinda.  Varduhl Abrahamyan as Polinesso was genuinely scary, and one of the most believably male trouser performances I’ve ever seen, especially when beating up on Braid.  Yet it was Braid and not Archibald or Abrahamyan who was the most interesting character onstage, a flawed individual right on the boundary between pathos and humour, many of her lines drawing nervous giggles from the audience. Alice Coote in the title role had a swaggering realism as a man, believably opting out of the first act bridal dance like so many men I’ve seen fleeing the dance-floor. Her singing is not overpowering, her coloratura not especially precise, but she offers something more important by inhabiting genuine feelings during her arias, authentic and in the moment. Owen McCausland was a suitably macho Lurcanio. While there were several poignant lament arias–one each for Braid, Coote and Archibald—the most moving number for me dramatically, one that elicited dead silence in the hall was the reconciliation duet between Braid & McCausland, a matter of question marks and possibilities rather than a genuine pathway. Johannes Weisser as King and Ginevra’s father gets to be the figure of dominance at the head of this quirky island of fundamentalists.

The production is full of self-reflexive and meta-theatrical moments, particularly in the use of puppetry in several key moments that are scored as ballet, but of course, can be staged any way the director wants. This is especially powerful at the climax of Acts II (Ginevra’s nightmares resembling hallucinations) and III (the resolution of the story).

The chorus have their moments as do the orchestra, brisk and crisp throughout under the direction of Johannes Debus, although it might have been a bit too brisk, considering that there were a couple of moments when soloists seemed hard-pressed to keep up. But even so the complexities of the stage picture matched the lovely sonorities presented to our ears.

3 Responses to What to expect from Ariodante