Candide with the Toronto Symphony: using our imaginations

Tonight was the first of two concert performances of Candide presented by the Toronto Symphony at Roy Thomson Hall in the worldwide celebration of Leonard Bernstein’s centennial year.

Earlier this week Joseph So was rapturous in his description of a concert performance of a Wagner opera in Cleveland with their orchestra.  One of the ironies of high definition broadcasts, particularly with bizarre director’s approaches to the staging, is to make some of us rebel at the notion of realism, pushing us back to the music, and indeed embracing concert performances as an ideal.  It’s especially valid for those works requiring the imagination, that are near impossible to stage in a realistic fashion.

If one were to ask for a list of such works, Wagner’s operas might be the first one would think of: yet Candide is every bit as impossible.  People die and come back to life. The action takes us back and forth across the Atlantic, and the whole time we’re really in the presence of a story that is told to us as if for instruction rather than for the purpose of creating a dramatic illusion.

One might argue that too much illusion is counter-productive.When I think of the music-theatre nerds I know:

Of course they were speaking from their acquaintance via recordings, aka virtual theatre.  When you listen to it you can create the illusion in your head, and won’t trouble yourself about the inanity of the plot.     And so this is a nerd’s dream.

They’re playing with us in this presentation from the TSO, as we watch members of the Toronto Mendelssohn Choir put on a bit of costume, which is to say, they’re still in a concert tux with a funny hat.  So this is hugely theatrical, demanding that we use our imaginations, like good nerds.  It doesn’t matter if Cunegonde is older than Candide, not when we’re in this virtual theatre of music, words & our flights of fancy. 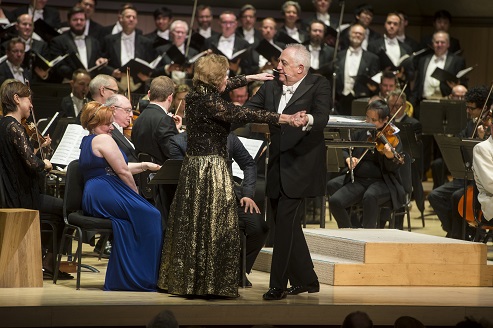 This felt like a very authentic performance to me, Bramwell Tovey kicking the TSO, chorus & soloists along at a wonderful pace.  Tovey even got into the act, singing & dancing himself, but he was having a great time.

I call it authentic because of a video I saw of Tovey, speaking of his history with Bernstein.  You watch, and judge for yourself.  All I know is that this Candide made a ton of sense, the best Candide I’ve ever seen.

There are other reasons why it was remarkable.  Tracy Dahl showed us a very different way of doing “Glitter and be gay”. Oh sure, she sang it perfectly. But in the middle she acted, she played the role of Cunegonde, giggling and crying like a true comedienne. This wasn’t just an aria but a whole scene, a complex portrayal, hysterically funny in places, poignant in others.  It brings me back to a current obsession of mine, that we need to pry the fingers of the musicologists off the throat of opera,  a form that they are strangling by missing the point.  Because of course opera isn’t just music, but theatre. And ditto for operetta and musicals.  We wouldn’t mistake a musical for a pure piece of music would we? Even in concert performance we understand that we’re dealing with a hybrid, part music / part theatre, and greater than the sum of its parts.  Dahl makes theatre out of her big aria, and indeed is making theatre –and wonderful comedy—every moment she’s onstage.  Oh sure, the voice is fabulous: but it’s not a virtuoso display, never about the music at the expense of the character or the situation. She was always alive as a character, in the moment and fascinating to watch. 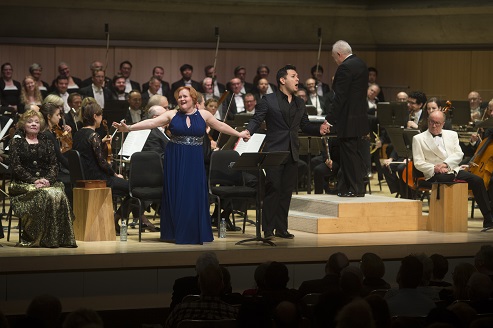 Judith Forst is also a theatrical animal, although in the Old Lady role, she’s given tons of great material, in numbers that people sometimes remember best of all in Candide.  I love this rich elegant voice, especially singing these wonderful melodies.

Nicholas Phan has a classic music-theatre sound, even though his bio suggests he’s at home with oratorio & classical singing.  The high notes floated, sometimes in a delightful falsetto: and they were pure magic.  While it’s a team-effort, I can’t help noticing that he is the most likeable Candide, managing to be totally sympathetic in a work that at times is all big ideas & philosophy.

And speaking of philosophy, one of the keys to Candide is the role of the narrator & Pangloss, presented tonight by Richard Suart.  If the virtual presentation floated along on any wings, they were largely his, the man spinning the tale.

If there’s any possible way you can get to see the second presentation on Saturday –admittedly on what feels like one of the busiest weekends of the year—I strongly recommend that you get yourself down to Roy Thomson Hall.  You’ll see and hear what I’m talking about. 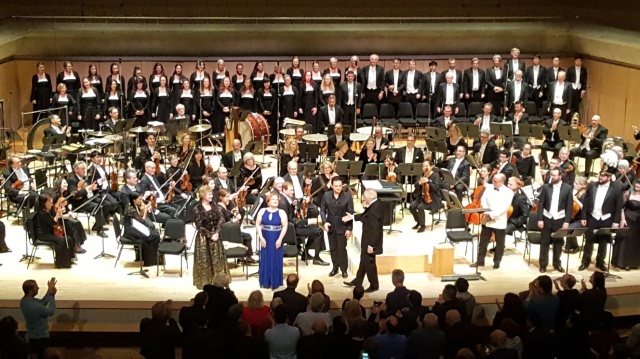 5 Responses to Candide with the Toronto Symphony: using our imaginations