It’s the second night of the 2019 Toronto Summer Music Festival and again it felt like a special event, this time in celebration of the tenth anniversary of the New Orford String quartet.  There’s a natural connection given that one of their violinists – Jonathan Crow—is the Artistic Director of TSM. 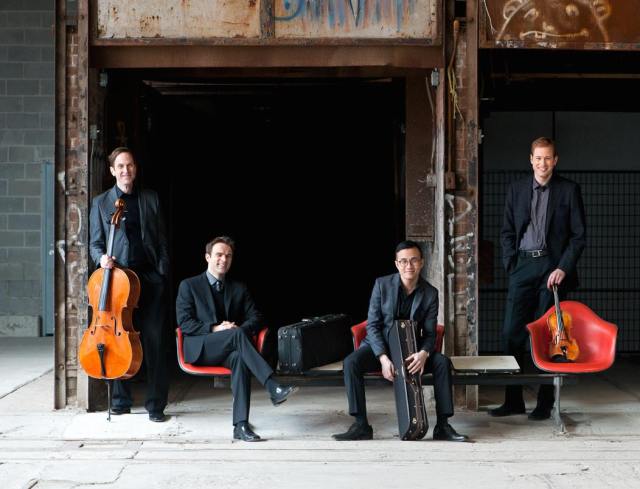 They gave us another program touching upon the festival theme “Beyond Borders”:

Hatzis? That’s heady stuff to be giving a world premiere, even if it’s not also sandwiched between Haydn & Beethoven, arguably the two greatest practitioners of the string quartet.

And his music wasn’t out of place.

The titles of the three movements suggest something  spiritual, the movements titled “Pesach” (the Hebrew name for Passover), “La Pieta (Jerusalem)” and “Regeneration”.  It’s often in a very rhetorical style, as though the instruments are doing call & response or dialoguing with one another.  In other places they are chordal suggestions of a choir, although I’m likely projecting something spiritual, knowing the movement titles.  In the second movement there’s a tonal melody played by Jonathan Crow, and later violist Eric Nowlin plays something that sounds a lot like Parry’s hymn “And did these feet”.  I have to assume Hatzis knows what he was doing in choosing a hymn that’s at least an alternate national anthem for England, a tune composed in the darkest days of WW I with nationalist if not imperial associations.  I’m not saying I don’t like the tune, I’m saying that suddenly it’s as though a big Union Jack was unfurled, especially as you could hear the change in the deportment of the listeners.   So be it, and perhaps this is exactly what Hatzis expected and wanted..

It’s an accomplished and polished creation with some marvelous moments. In the last movement I was especially moved by the use of harmonics to create some wild effects, truly magical.  While I don’t know if this is ground-breaking or “new” (whatever that means), it’s quite impressive whenever I hear a composer demonstrating that they knew how to achieve striking colours.  There’s a place near the end that reminds me of the last minute of Also sprach Zarathustra, where Strauss seemed to be posing the question about the meaning of life, balanced and unresolved between two opposing tonalities that might suggest negation & affirmation.  Hatzis does something similar except, once he’s posed the question, he brings us to a very firm & decisive answer at the end.  Hatzis would seem to be saying his eternal  “yes”.

On either side we had a pair of stunning quartets.  The Beethoven pushes the players to the limit.  All but smiley cellist Brian Manker wear a poker face, whereas Manker wears his heart on his sleeve.  Often he seemed moved by the lovely playing of the other three across from him.  Violinist Andrew Wan was especially strong in the opening movement, while Manker, in that wacky 2nd movement with all that pizzicato seemed to be channeling Charlie Mingus in his cool pluckings.   To begin we heard Haydn’s op 20 #4, in D, clean & as impressive as you could ask for.

For an encore we heard another Orford commission (but of course not a premiere), a lovely Pavane by François Dompierre that settled a raucous crowd down with its tranquil tunefulness.

The festival continues! While I didn’t drink any koolade yes I did buy the T-shirt.